In the early days of ballooning, launches were prone to failure. When failure looked imminent, the crowd’s mood would begin to turn. 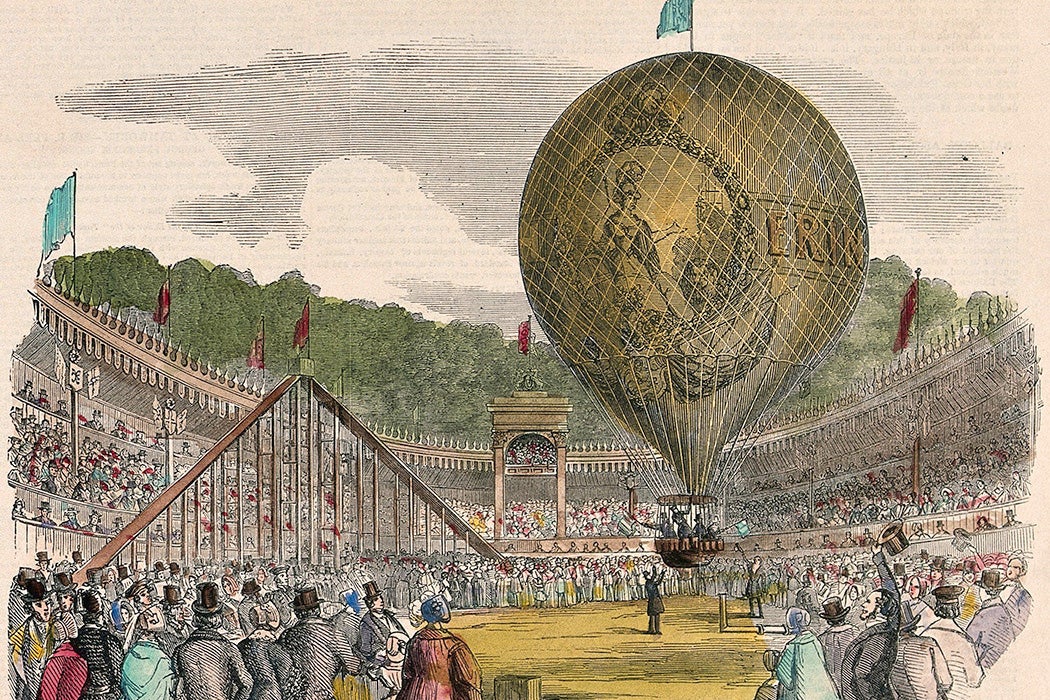 Large crowds of people have gathered to watch a gas balloon take off
via JSTOR
By: Amelia Soth
6 minutes
Share Tweet Email Print

Being an aeronaut, in the early days of hot air or gas ballooning, was a risky endeavor. You might pass out in the thin upper air. Your balloon might crash into a house or go up in a fiery blaze. And then, there was always the risk of your craft being torn apart in a classic hot air (or gas) balloon riot.

The Balloon should have gone up at 4 o’clock, by means of air rarified by fire. The balloon took fire and the experiment did not succeed… The people were furious and threw themselves upon the Balloon, and tore it in pieces each one carrying off a sample; some large enough to make a mattress and I believe the author would have been subjected to the same fate if they had not been escorted by a detachment of French Guards.

In these early days of ballooning, launches were highly experimental, and correspondingly prone to failure. When it looked like failure was imminent, the crowd’s mood would begin to turn. Balloons had to be filled slowly, as hydrogen was produced by pouring sulfuric acid onto iron filings. That meant, for every event – gas ballooning specifically – there was a long period of suspense during which it was uncertain whether or not the balloon would successfully rise–plenty of time for the crowd to grow restless and uneasy.

Was it better to wait while the crowd became increasingly restive, or take off in a less-than-fully inflated balloon?

Aeronauts were obliged to make risky calculations: was it better to wait while the crowd became increasingly restive, or take off in a less-than-fully inflated balloon? In 1784, Vincenzo Lunardi made the first successful manned balloon launch in England. The pioneering aeronaut was forced by an impatient crowd to make his ascent early, in a semi-inflated gas balloon that reportedly more resembled an upside-down pear. The gambit paid off, and Lunardi became an instant national hero, but it could easily have gone the other way.

Other incidents started when the crowd began to suspect that it was being cheated. The aeronaut Henry Coxwell was about to take off when a rumor spread through the crowd that “the balloon then present was not my largest and newest balloon, but a small one.” His balloon was torn apart and the car burned; shreds of the fabric were sold in the street.

The hot air balloon riot was the flip side of the massive enthusiasm for ballooning that followed swiftly on the heels of the first successful launch, in France, 1783. As news of the launch spread, balloons began to pop up on every conceivable surface. Soon, you could outfit your whole life in them: for the home, there were balloon tea caddies, chairs, saucers, plates, flower pots, cups, and clocks; for the body, balloon watches, handkerchiefs, fans, snuff boxes, and waistcoats. Women wore not only balloon earrings and balloon pins but “balloon ribbons” and “balloon side-curls.” Toymakers quickly began to produce tiny hot air balloons, so that anyone could recreate a launch at home in miniature. One liqueur manufacturer even advertised a “crème aérostatique.”

Indeed, as Paul Keen suggests in “The ‘Balloonomania:’ Science and Spectacle in 1780s England,” British balloon riots were probably driven in part by xenophobia. Mockery of the French “fad” combined with anxiety over the new device’s potential. One political cartoon pictured French and English balloons bombarding one another with cannon fire, accompanied by a caption claiming such sights would be common by the year 1800. The anxiety over the new invention’s potential led to a sense that aeronauts were devious foreigners out to trick the British public, take their money, and make them look like fools.

Balloon riots were not unique to Britain, however. In Philadelphia, a riot in the Vauxhall Gardens was inflamed when guards hurt a boy who was trying to climb a fence to get a better view of the launch. They beat him unconscious, and the crowds responded by breaking down the fence and tearing apart the balloon. This points to another potential incitement (or at least, potential aggravation) for the hot air balloon riot: overreaction on the part of local authorities. Indeed, it seems that the riot that destroyed Coxwell’s balloon only turned destructive after a policeman struck a woman in the crowd, leaving her bleeding on the ground.

Authorities tended to be suspicious of “balloon-mad” crowds, which were seen as unruly and lower-class. Perhaps this was shaped by the way balloon spectators were portrayed in the press, which often reflected an upper-class resentment at the working classes doing anything other than, well, working. This attitude is on full display in this quote from The Times of London:

[I]t is high time that some restriction should be laid on the madness of their frequent trips to the air, without one single good purpose being produced. If a calculation was made of the number of manufacturers it takes from their employment, a very alarming loss to the nation would appear to the reader, which all the money spent by foreigners in this nation will not compensate for; besides the dissipation, idleness, and mischief, which are the natural consequences of working men making holidays.

Lunardi’s movements in the sky,
Has spread the passion to be high;
And tempted those on earth content
Before, to wish for an ascent.