Lifecasting was the renaissance art of making sculptures using molds taken from real-life plants and animals. 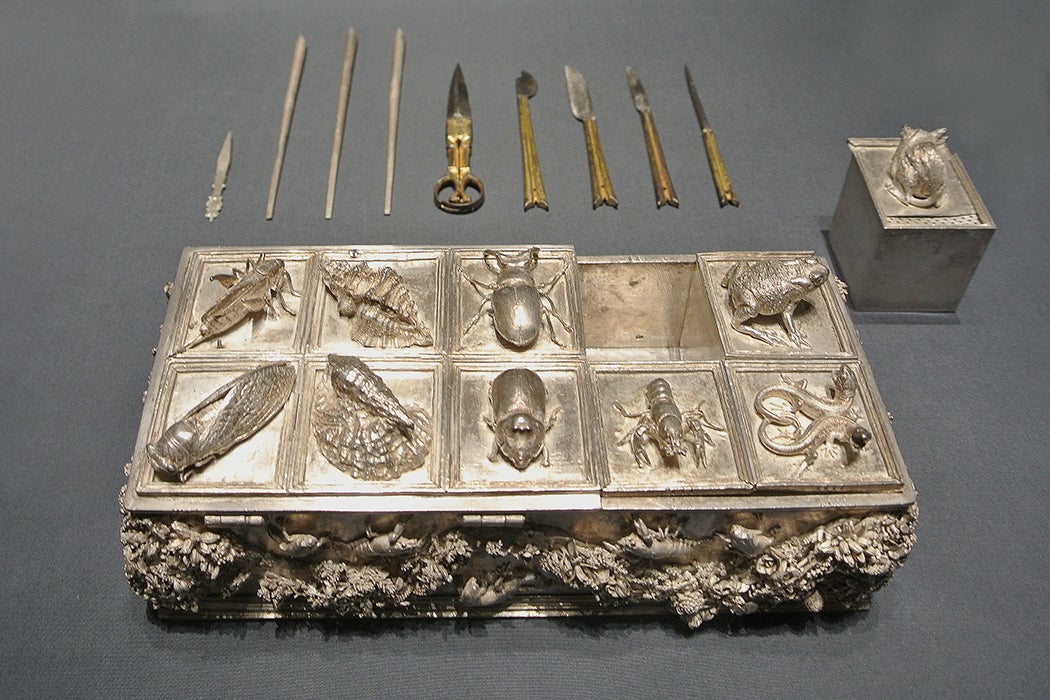 Almost five hundred years ago, an artist caught a mouse. Today, it sits atop a writing box in the Kunsthistoriches Museum, in Vienna. But it has undergone a transformation: every part of its body—its fur, its petal-thin ears, its velvety paws—is now made of polished silver. The mouse has been transmuted into a gleaming treasure.

The artist was Wenzel Jamnitzer, mathematician, printmaker, and preeminent master of the Renaissance art of lifecasting. Lifecasting is the practice of making sculptures using molds taken from real-life plants and animals, and it can result in astonishingly detailed and lifelike representations. Master casters could even turn spiderwebs into sculptures. Jamnitzer was famous for casting silver flowers so delicate that the petals would flutter when you breathed on them.

They look just like what you’d find if you turned over a log at the edge of a marsh.

Because artisans generally collected the subjects for their lifecasts themselves, they tend toward the humble. Rather than the exotica that populated bestiaries and popular prints, artisans took as their models the snakes that hid in their gardens, the spiders that lurked in their closets, and the flies that buzzed around their pantries. Bernard Palissy, one of most iconic ceramicists of the Renaissance, made life casts of the frogs, lizards, and fish he captured from the ponds and streams around his studio. He arranged them on platters like dense miniature ecosystems: shining blue enamel pools in the center, surrounded by muddy banks teeming with life. They look just like what you’d find if you turned over a log at the edge of a marsh.

Yet the final products were staples of royal cabinets of curiosities: household pests and garden weeds, reinvented as precious marvels. Some were even converted into useful objects: lifecasts of crabs were often hinged at the shell and made into boxes, and the gaping mouths of lifecast toads served as inkwells.

More inventive still was Palissy’s never-completed plan for a fantastical lifecast grotto. He imagined a full-scale ocean reef, with snails, sea urchins, and lobsters crawling over the crevices in the rock, eels coiling between enameled reeds, and fountains trickling over everything. “All of these animals,” Palissy wrote, “will be sculpted and glazed so close to nature that other natural lizards and snakes will often come to admire them—just like you see that there is a dog in my pottery studio, which makes several other dogs that see it growl, thinking that it is natural.”

Lifecasts stood at the center of an emerging debate about the nature of artistic representation. What did it mean to imitate nature? Was the artist a creator, or simply a replicator of images? Throughout the sixteenth century, it became more and more common for artists to sign their names to their artworks, and thereby stake a claim on the importance of their individual viewpoint in the creation of the image. At the same time, the so-called “imago contrafacta” (“counterfeit image,” in the sense of a perfect reproduction) was a growing trend. The term was applied to portraits taken from life, to scientific illustrations, and to representations of miraculous oddities (like these bearded grapes)—images that supposedly represent simple fact, free from artistic license.

What could be a more perfect example of the “imago contrafacta” than these perfect replicas of living beings? But things are never quite that simple. Lifecasters were not mere copyists, Xeroxing reptiles. The process required plenty of artistry. Artisans would prop open snakes’ eyes, reincise the lines on turtles’ shells, and fabricate faux scales to glue onto the sides of lizards. Sometimes artisans would even combine pieces of different plants or animals together, collaging them into a new, imaginary species. One artist invented a fantastical sea creature by pasting a spiky Murex shell onto the body of a garden snail.

On the other hand, one still-life painter, Elias van den Broeck, seems to have taken a leaf from the lifecasters’ playbook. Rather than painting butterflies with brush and pigment, he pressed real butterfly wings to the canvas, leaving the delicate, shimmering scales behind like the imprint of a stamp. But perhaps turning the still-life into an “imago contrafacta” was a bridge too far. According to one near-contemporary artist, den Broeck’s butterfly stamps so offended the “velvet-trousered signori” of Antwerp that they drove him out of the city.