A writer recounts her uncle’s experiences writing poetry in prison and advocating for Indigenous rights. His death and his typewriter are intertwined. 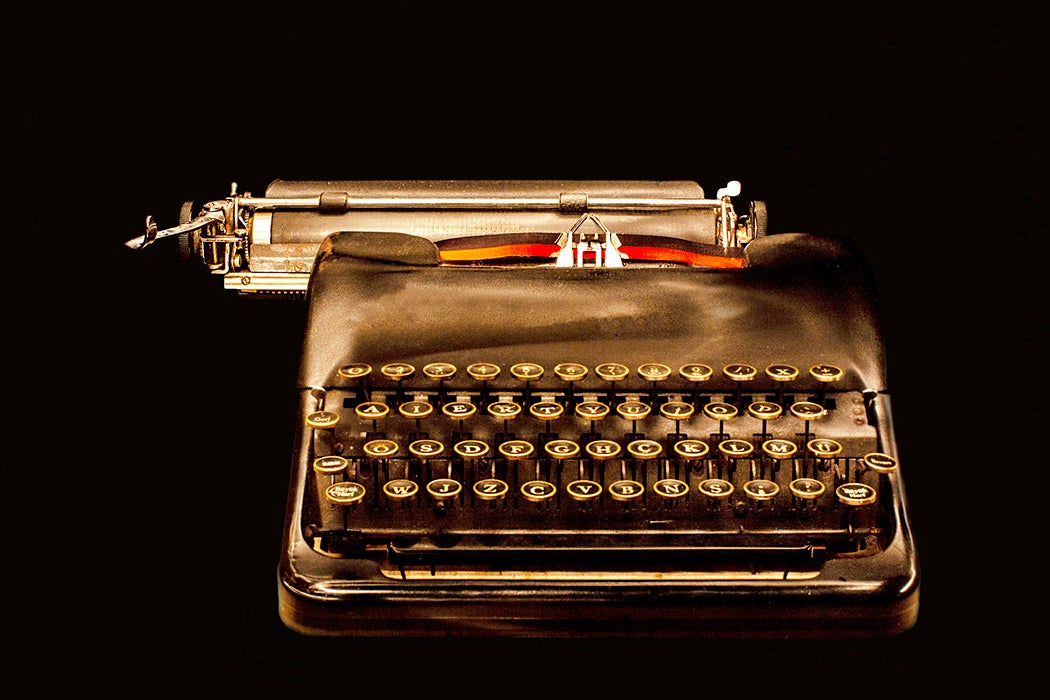 A poet rarely knows for certain if their words may change the world. Those behind bars face an added layer of insecurity: Will they be allowed to seek publication, send writing to trusted and beloved family, or even write in the first place?

Writing poetry behind bars, particularly for Chicanos, is a political act, argues Patricia Sánchez-Flavian in a 2003 article in Bilingual Review / La Revista Bilingüe. Poetry “offers an emotional sanctuary” within the brutal environment of prison, both for spiritual and political revelations.

As literature professor Doran Larson puts it in his essay Toward a Prison Poetics, “the prison universe is a true archipelago.” People are isolated from each other, from broader activist networks, and also from much of the literary criticism that might moderate their work. Without the need to make one’s ideas benign enough to secure traditional publication, prison provides a testing ground for radical thought.

Political-cultural movements like the Black Panthers have been fueled by creative output from incarcerated writers like Ericka Huggins. In a 2014 article in the Journal for the Study of Radicalism, Amy Washburn explains that poetry is a chance to reckon with both “barriers and freedom.” Writing is a chance to participate in revelatory and meaning-making processes, to combat reductive and trope-heavy stories. Yet the vulnerable act of writing poetry in prison does not guarantee success, emotional or otherwise. In fact, it may come with an increased risk of punishment.

Poet Ericka Huggins’ work was often confiscated under the premise that she was writing ‘kites’ to other prisoners. (‘Kite’ is prison slang for written notes or messages.) Activist and poet Jimmy Santiago Baca found his poems scrutinized by the administration, leafed through by guards. Censorship exists at every level of incarceration; it is a vivisection of what poets write to themselves, to each other, and what they are allowed to read from the outside world.

Words from My Uncle

“There is no News from the free world

They took the typewriter today

Because I write poetry.

Bobby Gene Garcia was a Chicano poet, a prisoner convicted of murder, and my uncle. Sources close to him share that poetry was his solace from prison itself and the crimes that led him there. Bobby Gene worked with other prisoners including Standing Deer and Leonard Peltier, all of whom are repeatedly mentioned in the American Prison Newspapers archive. A piece authored by all three is found on a June 1984 reading list which appeared in an issue of Anarchist Black Dragon. That paper was used as an organizing tool to unite abolitionists in prison and beyond, as Julia Métraux previously wrote for JSTOR Daily, hence the repeated mentions of my uncle Bobby, Standing Deer, and Leonard Peltier. They were not only prolific writers. They were known for their fierce activism—they fought for poetry and cultural activities, which had previously been barred to prisoners, derided as “luxuries.”

Leonard Peltier, in fact, has gained international recognition in the years since he knew my uncle as an American Indian Rights activist. Today, he remains housed at the United States Penitentiary at Coleman, a high security facility. Back at USP Terre Haute with my uncle, they both fiercely advocated for their rights under the law. The 1978 American Indian Religious Freedoms Act guaranteed religious freedom for Native Americans. Congress mandated that indigenous people be permitted to participate in their spiritual and ceremonial practices. But the American prison system did not, at first, follow policies meant to protect Native Americans and Chicanos. Prisoners weren’t even allowed to grow their hair long, as is tradition. Bobby and Leonard fought for the rights guaranteed them by AIRFA, regardless of their incarceration status.

It was in that community, the one of prisoners demanding the ability to engage in traditional and spiritual practices, that my uncle finally found peace. Sweat lodges, tobacco pipe ceremonies, the right to keep their hair as tradition dictated, regular meetings, and writing and sharing poetry were their modest asks. Nonetheless, they were met with resistance by the prison administration. To have each follicle of hair on my uncle’s head shackled and constrained, each word from his fingers monitored and held against him, each friendship scrutinized, means that it was not just his body imprisoned, but his mind and soul.

In quiet phone calls with the last living folks who knew Bobby, I discovered that he wrote poetry to atone and come to terms with what he’d done. He was inspired by the prolific writings of fellow prisoners like Standing Deer and Leonard Peltier, who have each written abundantly on the subject of imprisonment. Poetry and writing within a cell offer a chance for incarcerated people, especially those from a historically trauma-bound culture or ethnicity, to conceptualize their metaphorical and ancestral chains, according to Doran Larson. Poetry can be a balm for the soul, empowering some and offering a repast for others who have experienced trauma individually and culturally.

A prison cell is not an easy environment for writing, nor is it more conducive to concentration, focus, or peace.

Writing in prison is met with myriad cultural misconceptions and myths. Writers contemporaneous of Bobby naively and dismissively argued that they, too, could publish a book if they had nothing else to do, according to a 1976 American Poetry Review article. They believed a prison cell provides “ideal conditions” for writing. This belief can still be found in popular culture today. A prison cell is not an easy environment for writing, nor is it more conducive to concentration, focus, or peace. Survival itself is endangered in prison. Creativity is often an afterthought in the face of such violence and abuses.

My uncle and Leonard Peltier, both AIM activists and writers, escaped prison together. The risk was great but they found remaining too unbearable. Bobby Gene was recaptured almost immediately. The retribution came swiftly; ultimately, it proved to be a harbinger of death.  The prison placed my uncle in solitary confinement, denied him access to his typewriter, and threatened him. A few months later, Bobby Gene Garcia was found hanging from a bedsheet in a maximum-security area where prisoners weren’t allowed sheets. The place of his death will forever be the United States Penitentiary at Terre Haute, far from his home and his family.

Mentions of his death and life are found throughout the American Prison Newspaper archive. The writers and editors of Anarchist Black Dragon continued to lament the loss of a figure so important to their community. “To those who knew him, Bobby was known as a man with a very strong and warm character, a fighter for justice, a hard working artist, a man who loved nature… He was the sort of man who would never commit suicide.” Questions remain surrounding the circumstances of his death.

Although he was a prolific poet and letter writer, a 1981 issue of La Cucaracha says he left no suicide note. A 1982 issue of the Anarchist Black Dragon alleges that poet Bobby Gene Garcia—my uncle—was drugged and killed for his involvement with the American Indian Movement. In a well-documented and highly publicized case like that of Leonard Peltier, AIM activists in prison faced oppression on various fronts; they suffered legal retribution, cultural repression, and the struggles of tribal entities.

As a child, I was told that “they killed” my uncle Bobby because “they” were threatened by his typewriter. Writing in prison is an act laden with danger, quite contrary to the assertion that it is an environment conducive to putting words on the page.

Though never having been incarcerated, I have personally experienced the far-reaching arm of prison censorship. Incoming mail to political prisoner Leonard Peltier, who is still a leader of the American Indian Movement, is heavily restricted. The International Leonard Peltier Defense Committee advised me of the unwritten rules I must abide by to communicate with him. Only typed 20-point font letters will make it through, and any deviation in format will result in rejection. He is currently held at the United States Penitentiary at Coleman, a high-security facility. Each time I try to reach him and thank him for being my uncle Bobby’s mentor and friend, my letters are rejected and returned to me. In fact, multiple states have moved into ethically questionable territory. In Massachusetts, prisoners are not allowed to receive any hand-written mail including birthday cards, which must then be accessed via a kiosk.

A poet faces uncertainty in the best of times, but the combined nature of prison isolation, exacerbated by harsh censorship and pandemic protocols, means that prison poets are facing worsening conditions. Without access to a writing community, the ability to share one’s work, and the mentorship and critiques offered by fellow prisoners, poets’ craft falters. Although writing can serve to empower incarcerated people, to provide opportunities to flex and grow one’s social-emotional learning skills, and give agency back to people stripped of dignity, the risk of censorship can undo these benefits and cause further harm. It is vital, then, to turn our collective eyes to modern prison censorship.

The pandemic exacerbated isolation and disconnectedness for prisoners who write. It’s partly why I sought to become the assistant managing editor of a magazine that publishes incarcerated folks. One submission from E. Kelley, who is incarcerated, to Iron City Magazine a sentence of death does not permit the state to execute through neglect by failing to protect those on death row from a deadly virus. It took me days to shake off the dread I felt reading that submission. It was neither the first nor the last time haunting words of an incarcerated writer would fill me with dread. From my uncle Bobby, to Leonard Peltier, to all the unspoken names of all the writers among the two million Americans that are currently incarcerated.

“My only crime is to possess the irrepressible free will to keep resisting the government in their design to repress and destroy the Indian native and our way of life,” Bobby Gene Garcia, my late uncle, declared in a 1980 of the Revolutionary Worker.

They took my uncle’s typewriter right before his death. His poetry, his progeny, lives on in booklets and archives. Other poets in prison scrawled words knowing they’d be stolen, confiscated, or destroyed; we owe it to them to stare unblinkingly at the metaphorical children of the carceral state.