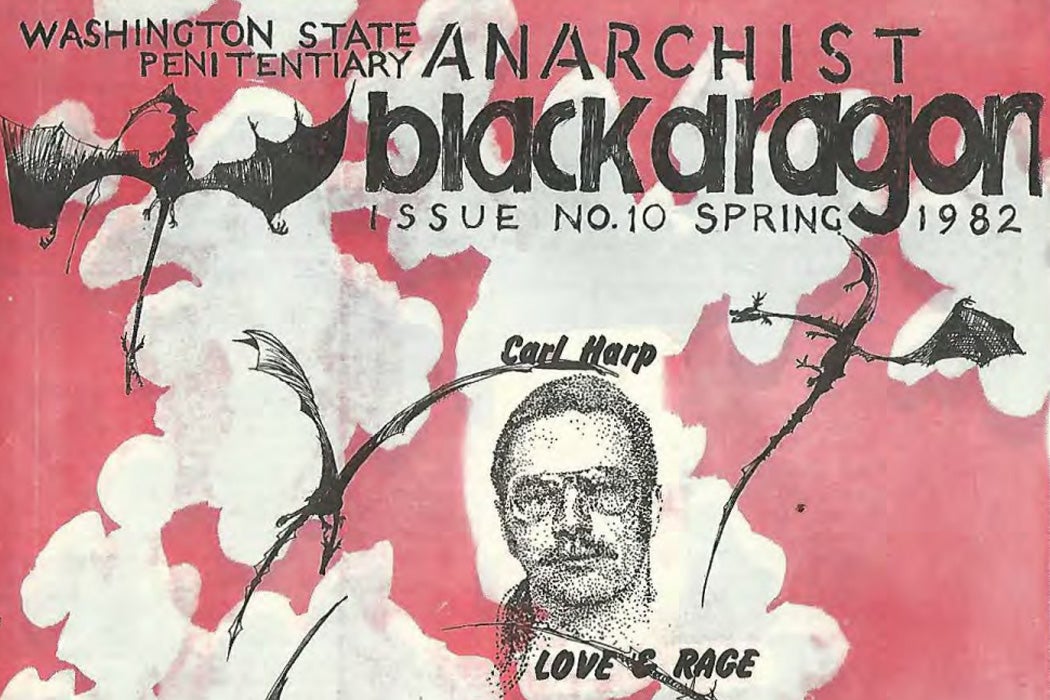 The tenth issue of the Anarchist Black Dragon, from the spring of 1982, was a somber one. Carl Harp, a journalist for the paper—produced entirely in prison by a collective of incarcerated people—was murdered in his cell after writing the introduction to the issue. Titled “The Dragon Speaks” and offering no indication that his life was in imminent danger, the posthumous introduction offers insight into the fraught climate of the times.

Founded in 1977, the Anarchist Black Dragon shared the communal concerns of leftist incarcerated people in the Washington State Penitentiary in Walla Walla, Washington. As the name of the paper suggests, the writers were committed anarchists who advocated for the abolition of prisons. In the third issue, the collective argued that all prisons “are used to break people, to trample them into a mold that no sane people would willingly accept.” Although the publication was not easily accessible outside the state penitentiary, they did have allies on the outside who helped share their work.

The voices of incarcerated people have often been overlooked on the outside even with people who share an anti-prison stance.

However, when Harp reached out to beyond-the-walls anarchists for help with research, they allegedly brushed his requests off. After his death the same group seems to have claimed allyship while still neglecting those inside. An anonymous writer wrote in the spring 1982 issue, “The same radicals were still ‘too busy’ (now with a press release on [Harp’s] death, I guess).” The voices of incarcerated people have often been overlooked on the outside even with people who share an anti-prison stance, due in part to the difficulty in communicating from behind prison walls.

Prison journalism is nearly as old as the country itself. The first prison newspaper, Forlorn Hope, was published on March 24, 1800. Over 450 prison newspapers have been published and distributed among people in prison over the past 220 years, but the number of newspapers has decreased over time. In fact, the era during which the Anarchist Black Dragon was published, between the late 1970s and the mid 1980s, marked a period of decline in prison journalism.

Those two decades marked a swift transition in the rights of prison journalists and editors. In a December 1979 issue of the Virginia Law Review, the notes section mentions that the Pittman v. Hutto case “held that prison officials can suppress publication and distribution of an inmate-edited newspaper if they reasonably and sincerely believe that the newspaper’s content would threaten the state’s legitimate penological interests.” A series of rulings in California would contradict more conservative rulings, as having access to a free press in an important part of the First Amendment. However, as noted by journalist Jonathan Peters in a Columbia Journalism Review article, “The First Amendment does a generally fine job of guaranteeing rights to communicate, but it’s a fickle source for access rights, which come from a complex system of statutes, regulations, the common law, and a few problematic Supreme Court decisions.”

The difficulties stretched beyond legal debates. Unlike The New York Times and local newspapers across the country, the prison newspapers were reported, laid out, and distributed in an extremely small area. “They didn’t send them to publishers. They were the publishers,” James McGrath Morris, author of the nonfiction book Jailhouse Journalism, told JSTOR Daily. “Depending on the prisons I visited in the early 80s, most of them had print shops where they were training inmates in typography, printing, etc.” Prison journalists at the time used typewriters similar to the Selectric to write their stories, like many other reporters of the era. Now nearly extinct, typewriters can still be found in prisons as a 2012 issue of Prison Legal News attests. Earlier issues of that paper were produced in prison by incarcerated people and are available in Reveal Digital’s American Prison Newspaper Collection on JSTOR.

Papers experienced both heavy handed and nuanced forms of censorship, the latter of which could still be damning, per McGrath Morris. Putting together a newspaper requires materials like ink and paper, and some of these items could be conveniently delayed or go missing. Should prison administration not like what a particular paper is doing, according to McGrath Morris, “It’s not necessarily surprising, the order for paper or ink should be delayed. That’s not a very easy thing to appeal because you have to prove that they willfully didn’t order enough to run that month’s issue.” Fellow incarcerated people could also intimidate prison journalists to not report on certain issues, which is also difficult for the prison journalists to safely prove.

Even if their newspapers were not explicitly anarchist like the one based in Walla Walla, Washington, many prison newspapers challenged the status quo. Perhaps because of that, they faced issues with censorship. Some prisons in the 1970s and 1980s attempted to stop prison journalists from printing certain stories. “When prison authorities said you cannot publish this particular article, San Quentin [State Prison’s newspaper], for instance, left a blank space for one of the articles, but the courts regularly supported the inmates,” McGrath Morris said.

Prison journalism gives people in prisons power and an avenue to raise awareness about systemic issues in prisons. The slew of court battles that ensued when prison administrations attempted censorship indicates that the newspapers may have been perceived as a threat. The courts tended to side with the incarcerated people on the grounds of upholding their first amendment right to free speech. Any censorship, it was determined, had to be on the grounds of legitimate government or penological interests, and not simply to stifle free expression of beliefs—no matter how critical or defamatory those beliefs may be.

The 1979 issue of the Virginia Law Review summarized the legal framework like this:

The fact that the state has no responsibility to publish a newspaper does not affect the degree of protection required by the first amendment. In each case in which a court has struck down content-based suppression of a prison newspaper, the court has held that once prison authorities allow a newspaper to exist within the prison, the newspaper cannot be suppressed in violation of the first amendment.

The solution settled on by prison administration to circumvent the first amendment was simple: don’t allow a newspaper to exist within the prison. Prisons began to permanently restrict access to the tools necessary to do the job, typewriters and printing materials, without technically engaging in censorship. The number of prison newspapers plummeted.

Currently, there are less than ten prison newspapers in 2021, according to the Prison Journalism Project’s website. PJP is currently training incarcerated people across the country to become journalists, with its students’ work being published both on the PJP’s website and in local and national publications. PJP contributor Patricia Elane Trimble, an incarcerated writer, told Poynter that the organization’s work is important because “your only hope is to reach outside of the system” for change in prisons and in the criminal justice system to happen. One key advocacy issue of the Anarchist Black Dragon was to fight for the abolition of prisons, which required and would still require support from non-incarcerated people. For example, in the tenth issue of this collective’s newspaper, they wrote about ways that non-incarcerated people can be better allies to people in prison. While that issue was printed nearly forty years ago, people continue to organize for some of the calls for action outlined in the newspaper.

The first of the concepts listed was the “Prisoners’ Bookscheme.” The goal of this project was to “get publishers and bookshops to donate books so that they can be sent in to prisoners.” Like the fight to allow prison journalists to write and distribute prison newspapers, there have been numerous court cases in the 20th century pertaining to whether or not people in prisons should have access to books, and if so, which kinds of books. This is not a bit of authoritarian history, but rather an ongoing public debate. In 2010, the American Civil Liberties Union filed a lawsuit against a detention center in South Carolina for banning books and other reading materials, and the detention center reversed its policy in 2012.

Another one of the collective’s ideas was meant to help incarcerated people to see family members and other loved ones. “The idea of this scheme is to provide the relatives of prisoners access to their own inside,” the collective wrote. “Many prisoners are in prisons that are a considerable distance from the area in which they have family or friends.” This has not changed in decades. A 2015 report from the Prison Policy Initiative found that 63 percent of people in state prisons are over 100 miles from their families.

Although prison journalism is not explicitly pro-abolitionist, both prison journalism and prison abolitionists highlight the inhumane practices that take place in prisons. Both groups also spend time trying to educate people outside the walls on how the legal system systemically criminalizes people of color, people with mental illness, and other marginalized groups.

While many of their schemes are still in place today in groups advocating for prison reform and abolition, the Anarchist Black Dragon’s flame went out not long after the death of its leader, Carl Harp. In the final issue of the collective newspaper, an anthology, an activist with the first name Jeanne wrote, “the literary and physical actions taken by members of the Collective and other inmates to counter massive, inhumane, and illegal abuses should have served as a lesson…unfortunately, it seems they did not.”