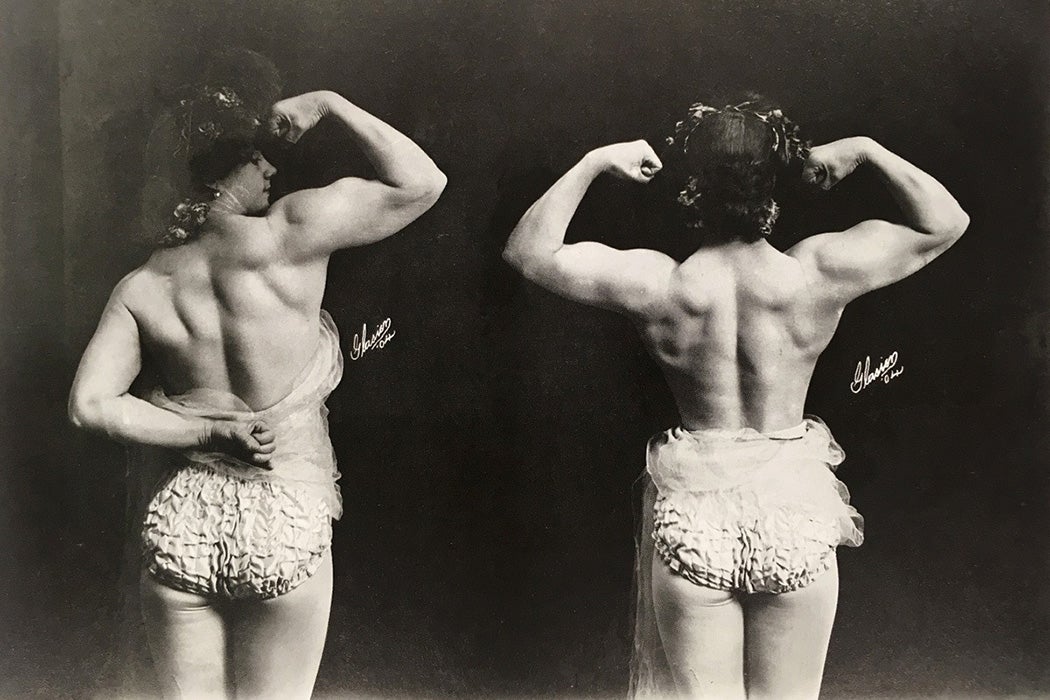 It has been suggested that adult brands are among the earliest adopters and strongest drivers of technology innovation. It’s therefore not a surprise to learn that, when Thomas Edison was testing motion picture technology in the early twentieth century, he figured a striptease would be the ideal subject.

For a long time, unusually strong women were regarded as aberrant curiosities, described with wonder in the same breath as bearded ladies and living skeletons.

Strongmen were a well-known part of public entertainment in the late nineteenth and early twentieth centuries, for their remarkable feats of strength but also as the embodiment of “physical culture,” the idea that people (particularly men) needed to up their fitness game in order to demonstrate humanity at its physical and moral finest. When Eugen Sandow flexed and posed as a Greek statue in front of a velvet curtain at the 1893 Chicago World’s Fair, he created an instant sensation and an obsession with the “imaginary antiquity” of being impeccably swole.

Gilded Age strongwomen soon joined the fray to prove that they could be just as strong as their male counterparts. This was a brave step: for a long time, unusually strong women were regarded as aberrant curiosities, described with wonder in the same breath as bearded ladies and living skeletons. (Strongwomen and the “singing strong lady,” who supported a piano and accompanist on a tabletop laid across her chest and legs, were listed in George Gould and Walter Pyle’s “Anomalies and Curiosities of Medicine” at the turn into the twentieth century.)

Strongwomen found employment and increasing notoriety in circus and its allied arts, particularly as a combination of factors—from P. T. Barnum’s dogged democratization of moral entertainment, to Anthony Comstock’s anti-vice crusades, to the simple proliferation of both shows and media—made the circus tent an acceptable family destination. This not only destabilized the white-male basis of physical culture, it challenged popular ideas about female ability, all while showing a discomfiting amount of skin and startling muscle mass. Charmion joined strongwomen such as Vulcana, Katie “Sandwina” Brumbach, and Minerva, who similarly adopted faux-classical names and gladly sat in ruffled circus togs flexing biceps the size of Easter hams.

Making her vaudeville debut in New York on Christmas Day 1897, Charmion astounded and delighted audiences with an unconventional aerial act in which she stripped from a full-skirted outfit down to her leotard and tights. In bringing together strength training, striptease, and aerialism in middle-class entertainment, Charmion was poking at a number of social hot-buttons. As physical culture scholar Bieke Gils points out, in a single act Charmion managed to argue for “women’s liberation from restrictive clothing, women’s ability to develop muscular strength like men, and the benefits of such ideas for their health and well-being.” A lot of people were suddenly nervous, confused, excited, or all of the above.

Gils suggests that the collective gasp came with some strings attached; a woman’s body on stage could be received differently, depending on the forum. Classism meant that nudity in a burlesque show would be often viewed and described as vulgar entertainment patronized by the working class, in contrast to a more artistic or classical performance like ballet or Greco-Roman “living statue” displays, which could be justified as edifying and tasteful by an upper-class audience. Charmion was no ballerina.

The hubbub wasn’t just about nudity, either: Victorian women above the working-class threshold (and any women who consumed public media) were encouraged to see physical activity as distasteful and to seek fulfillment as the “Angel in the House.” Charmion and fellow strongwomen confronted the glorification of female weakness, encouraging women to ditch the corsets, start their day with a cold glass of water and a light dumbbell workout, and get a nice outdoor walk in at some point. This was attainable enough that it panicked no small number of men in the establishment (as Maria Popova delightfully put it, “When women first began to work out with weights, it was considered dangerous to have them lift anything heavy and so they were given only two- or four-pound wooden dumbbells. The fact that women lifted much heavier objects in the home seems to have escaped most of the men who designed the exercise.”)

Charmion was a natural choice as Edison’s film subject. Photography was a new technology at the time, and pioneers like Muybridge and Edison were very much interested in using their lens to capture the moving human form. In reducing her act to a soundless vignette, though, Edison severed it from the energy and social context of its live execution. Gils notes that on stage, Charmion typically chatted with the audience throughout her performance in a distinctive “chirpy” voice, and she generally “used the stage as a platform to convey her beliefs on what the female body should look like and how women should aspire to be physical [sic] active, have a balanced diet, and remove clothing that would hamper free movement.”

(Even so, this at least gave Charmion more centrality and agency than the woman in Edison’s “What Happened on Twenty-Third Street,” in which he also used the camera to titillate viewers with some good old objectification, capturing the moment when an unsuspecting woman’s skirt blows upward over a steam vent.)

Gils sums up Charmion’s legacy well, writing, “While she alone did not dismantle patriarchal structures that tended to objectify women’s sexuality for the pleasure of men, she helped set new standards for female health and beauty that combined physical fitness, strength, and freer movement of the female body.” 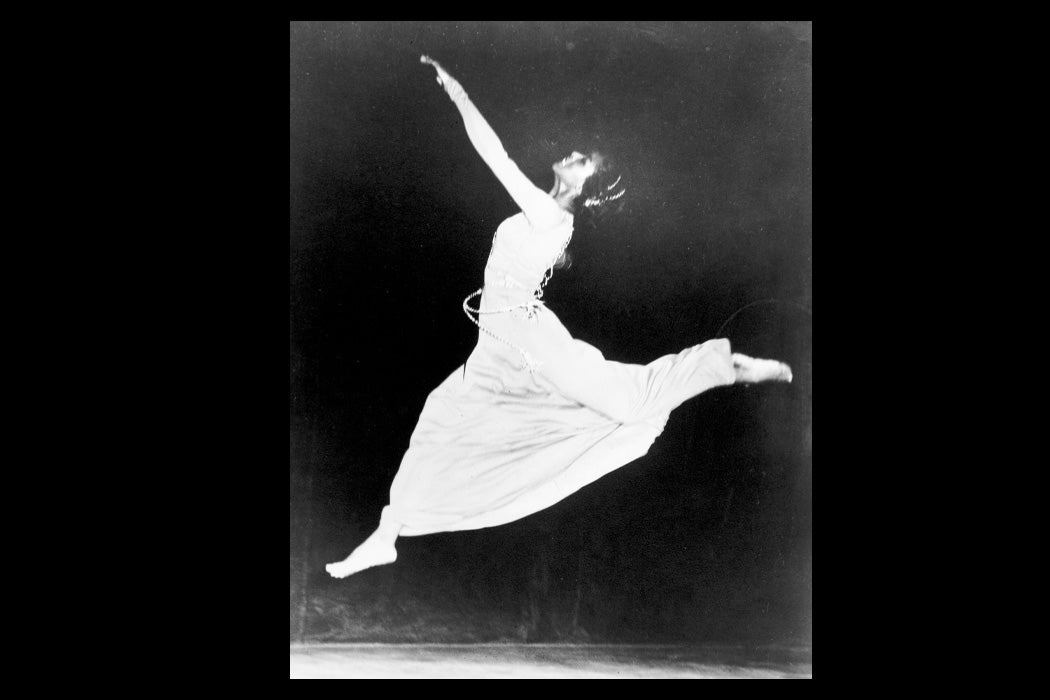 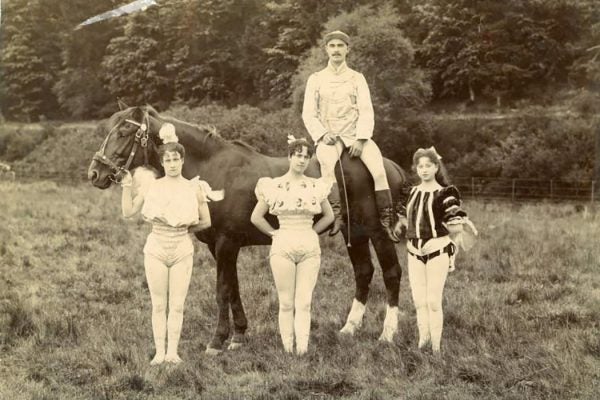 In Victorian England, the circus appealed across an otherwise class-divided society, its audiences ranging from poor peddlers to prestigious public figures.