The Discovery of King Tut’s Tomb

A century ago, a lost tomb was uncovered on the west bank of the Nile River. The scarcely studied Pharaoh Tutankhamun immediately became an icon. 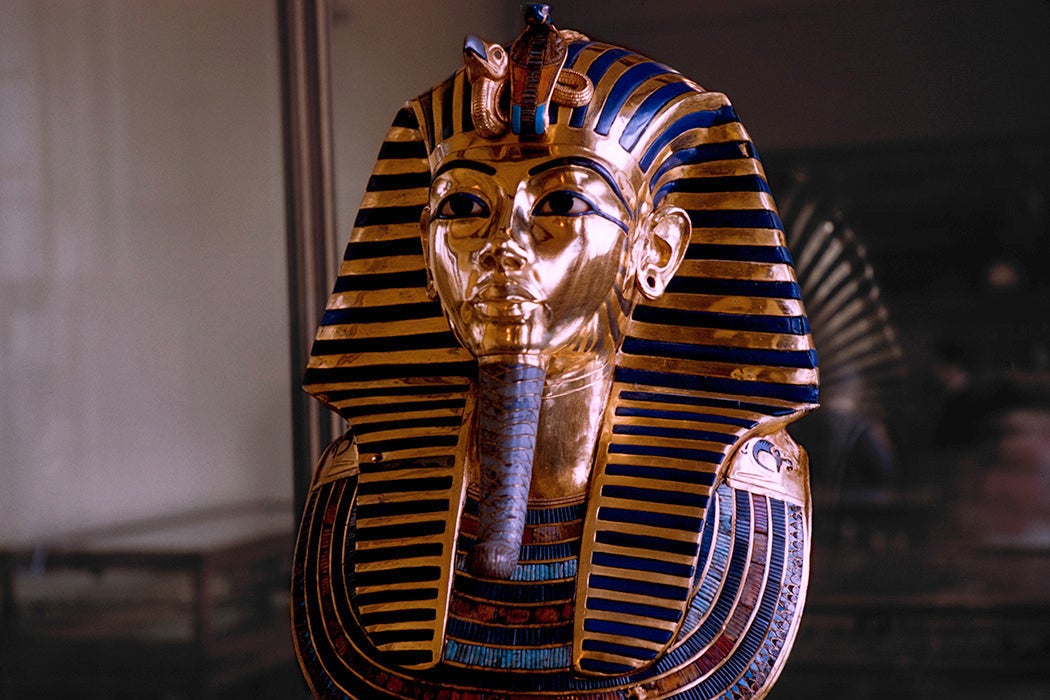 “First steps of tomb found,” British archaeologist Howard Carter excitedly wrote across a page of his pocket diary on November 4, 1922. The next day’s excavation in the Valley of the Kings on the west bank of the Nile River would reveal a tantalizing entrance. He quickly sent a telegram to Lord Carnarvon, who had been sponsoring his (mostly unsuccessful) investigations of Egyptian antiquities for several years and had reluctantly backed this final season: “At last have made wonderful discovery in Valley; a magnificent tomb with seals intact.”

The subsequent opening of Pharaoh Tutankhamun’s long untouched tomb and its burial chamber—and the dissemination of its treasures through photography, film, and traveling exhibitions—would captivate the world and transform a young Egyptian king whose reign was brief and little remembered into an icon of ancient mysteries.

A century later, the objects found in the tomb continue to generate new questions and answers.

Because Tutankhamun’s tomb was largely undisturbed—there are indications it was robbed a couple of times in antiquity but then restored—it offered a rare view into ancient Egypt and its faith, culture, and funerary rites. Stories about its discovery and the gradual uncovering of its artifacts made front-page news across the globe, with reporters marveling at each opulently adorned statue and alabaster vase. On December 22, 1922, The New York Times published a first-hand account in which the author wrote: “No finer human interest story, no more thrilling drama, no greater archaeological revelations could be summoned from history or the most vivid imagination than is told by the mute objects in this tomb of King Tutankhamen.”

The public imagination was further ignited by the photographs that captured the moment of discovery. As art historian Bridget Elliott relates in South Central Review, “the documentation of the tomb itself seemed just as contemporary as the media coverage surrounding it.” The approximately 1,800 photographs taken by Carter’s expedition photographer, Harry Burton, were “often deliberately staged,” and he “cropped the objects to foreground their strangeness.” Burton spent time in Hollywood studying lighting techniques to capture not only the appearance of the subterranean space but its sense of awe.

A century later, the objects found in the tomb continue to generate new questions and answers. Technologies that weren’t available in the 1920s, such as CT scanning and DNA analysis, have given a fuller picture of the ruler popularly known as King Tut. Recent studies range from an investigation of his footwear that suggests he suffered from orthopedic malformations, through laser scans of his tomb that have revealed still more tombs, to the analysis of a meteoritic iron dagger that may have been passed down from his grandfather Amenhotep III.

Alongside this bolstering of archaeological studies, and perhaps as impactful, has been the tomb’s influence on culture. Just a few months after the discovery of King Tut’s treasures, “newspapers were already reporting their influence on Fifth Avenue fashions, as well as a brisk trade in fake tomb artifacts,” archaeologist Frank L. Holt writes in Archaeology. And this was just the beginning of 100 years of pop culture frenzy that leaned more into appropriation than appreciation, ranging from King Tut’s recurring role as a 1960s Batman TV villain to numerous Art Deco theaters adorned with sphinxes and papyrus columns.

Egyptomania was a fad before the 1920s, with an earlier wave inspired by illustrations of discoveries from the eighteenth-century Napoleonic expeditions. Yet as Egyptologist Bob Brier writes, “Tutmania [was], in fact, a subgenre of Egyptomania,” and it included direct references like fashionable Jazz Age ladies “sporting lead pencils around their necks shaped like pharaohs” as well as lazier nods like King Tut brand lemons that “didn’t even bother to show Tutankhamun and just hoped the name would sell the lemons.” US President Herbert Hoover even named the dog he adopted in 1922 King Tut.

Aesthetics of the solid gold sarcophagus and its accompanying jewelry, shrines, and chariot aside, what especially propelled Tutmania was the sensationalist lore of a mummy’s curse. Although Lord Carnarvon died in 1923 of an infection from a mosquito bite that he cut while shaving, a 2002 study showed no connection between being present at the tomb opening and an untimely death. A decade after the tomb’s discovery, The Mummy, starring Boris Karloff as the titular resurrected corpse, included an opening scene reminiscent of Carter’s excavation, with the on-screen archaeologists being warned: “Whoever opens this box will die from the mummy’s curse.”

In the 1970s, the touring Treasures of Tutankhamun allowed people to experience the wonders in person. “Seen by eight million visitors while touring America … The Treasures of Tutankhamun marked the invention of the blockbuster exhibition,” writes architectural historian Mari Lending in Perspecta, adding that the show culminated at New York’s Metropolitan Museum of Art “where it framed the celebration of the Egyptian gift of the Temple of Dendur, which due to Cold War geopolitics was relocated permanently to New York from Nubia.” The 1976–77 issue of The Metropolitan Museum of Art Bulletin featured a lavishly illustrated article contrasting the black-and-white images of the tomb with richly saturated photographs of the touring objects. It concluded with a casket lid adorned with a naturalistic depiction of the pharaoh and his queen, Ankhesenamun, and Carter’s supposition that objects like this help us “to visualize that the young king must have been very like ourselves.”

But who was the man behind the gilded mask? Before Lord Carnarvon sponsored Carter’s expedition, he was more or less unknown—a minor ruler, overlooked by archaeologists. As Egyptologist Kate Liszka observes, “he was an insignificant historical figure until his tomb was discovered; he would not have lived on in the memories of Egyptians much later than the 19th Dynasty.” Becoming pharaoh at the age of nine in 1333 BCE, Tutankhamun inherited a kingdom in upheaval. Akhenaten before him had shifted Egyptian religion to monotheism for the Sun god Aten; under Tutankhamun’s rule, the earlier religion was restored. His sudden death in 1323 BCE, which led to his mummification and interment (his tomb was later hidden by additional tombs and workers’ homes), was forgotten for more than 3,000 years. In that time, the cause of his death became a mystery that is still under debate today. Research on his preserved body with its clubbed foot suggests a degenerative disease, a conclusion which some say is reinforced by the more than 100 canes in his tomb. Others argue that he was a fearless warrior whose intrepidness in battle may have brought his early end. Egyptologist W. Raymond Johnson observes that the reliefs depicting battles on his “mortuary temple and from the painted casket from his tomb may commemorate the king leading Egypt’s armies into battle against Syrians and Nubians.”

After many delays, the Grand Egyptian Museum in Cairo is expected to open in 2023 with the full display of Tutankhamun’s treasures as a centerpiece. Alongside are exhibitions, including Tutankhamun: Excavating the Archive at the Bodleian Libraries in Oxford, England, that center the work of Egyptians who were integral to the tomb’s discovery and consider what (or who) has been left out of one of the most examined archaeological finds in history. The story of golden treasures lost in the sands may astonish viewers for another century, with Tutankhamun’s posthumous admirers far outnumbering those he had in life, his face immortalized in gold, lapis lazuli, obsidian, and turquoise offering a gaze into a now arcane past.

Editor’s Note: This story has been updated to provide the new projected opening date of the Grand Egyptian Museum in Cairo and to delete a repeated word.