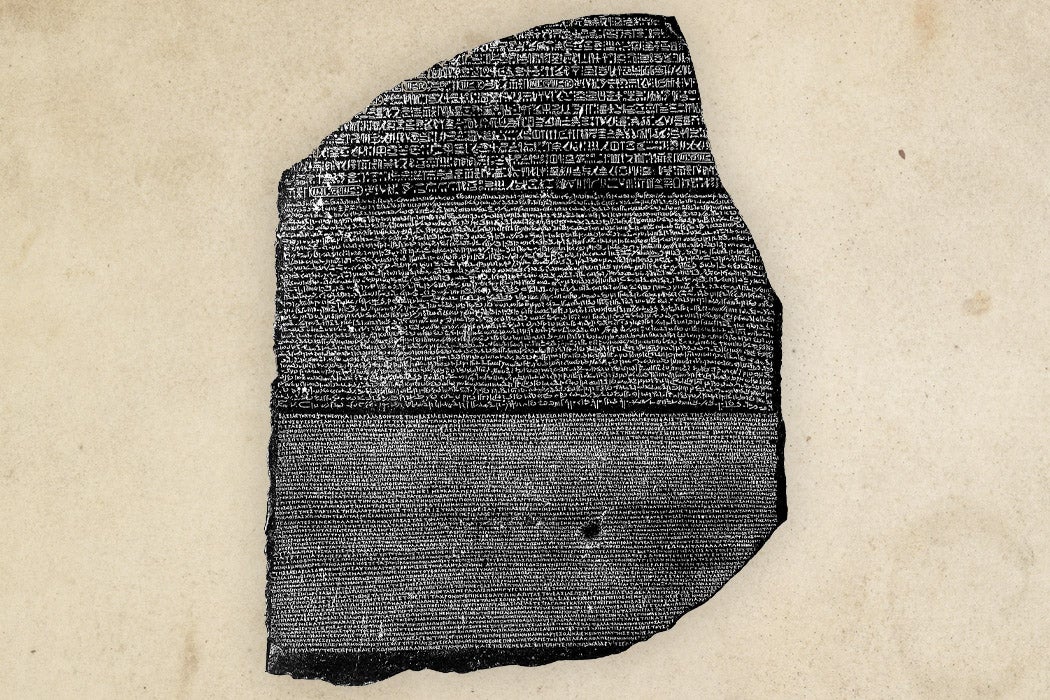 Two-hundred years ago, French scholar and polymath Jean-François Champollion announced he had deciphered the Rosetta Stone. His September 27, 1822, presentation to the Académie des Inscriptions et Belles-Lettres in Paris—where the audience included his main rival, English polymath Thomas Young—would radically change the study of ancient Egypt. For the first time in centuries, Egyptian hieroglyphs could be understood, leading to a new wave of research into this lost language and the distant past it recorded.

When the Rosetta Stone was inscribed, it wasn’t a singular object; rather it was one of many of its type. Its text praising the divine virtues of the pharaoh Ptolemy V (crowned in 196 BCE) was spread across Egypt through the erection of similar stelae (stelae, sing. stele or stela, were upright stones upon which commemorative or declaratory texts and images were inscribed). These particular stelae were raised during a tumultuous moment of uprisings against the Ptolemaic Kingdom, which, though its rulers were portrayed in Egyptian-style dress on their monuments, was governed by Greeks who imposed their Hellenistic beliefs and systems upon their subjects.

The Rosetta Stone was a form of propaganda, then.

The Rosetta Stone was a form of propaganda, then. The inscription, written in three languages—formal hieroglyphs, demotic (the “everyday” Egyptian script), and ancient Greek—declared that its readers must hail Ptolemy V, “the god who maketh himself manifest, whose deeds are beautiful.”

Archaeologist Jason Urbanus observes that the “tripartite inscription can be understood to have been designed by the Ptolemaic regime to ensure that the diverse populations of ancient Egypt would be able to read and understand its message extolling the sovereignty and legitimacy of the Greek pharaoh.”

Carved in granodiorite—stone that likely “originated from Ptolemaic quarrying sites to the south of Aswan, where dark-colored rocks such as this, sometimes cut by veins of pink granite, are to be found,” according to researchers Andrew Middleton and Dietrich Klemm—the stele was left unfinished on the side that probably wasn’t intended to be seen by readers. The stele later broke, but it was sturdy enough that much of the message remained intact. The repetition of the king’s name in three languages would make it a watershed discovery for understanding not just the era of Ptolemy V but of all of ancient Egypt.

As historian Jennifer Westerfeld writes, the Roman occupation that followed Greek rule led to a further decline of hieroglyphic writing, such that the “last known hieroglyphic inscription, a graffito from the temple of Isis at Philae, was produced in 394 CE. By that time, the graffiti writer, a priestly scribe named Smet, was one of the very few individuals who possessed any knowledge whatsoever of the hieroglyphic script, and by the early fifth century that knowledge would be effectively extinct.”

By the time of Napoleon Bonaparte’s campaign in Egypt in 1798, hieroglyphs were impenetrable, with researchers unsure if they operated like pictograms or phonetic symbols. The exact story of the Rosetta Stone’s rediscovery is a little ambiguous, but it’s largely held that on July 15, 1799, French soldiers excavating for work on a fort near the port city of Rosetta (today’s Rashid) on the Nile delta found the fragmented slab. Because ancient Greek was still a known language in the late eighteenth century, the trilingual text spurred excitement about the possibility of interpreting the inscribed hieroglyphs.

The stone was only briefly in French hands; as a spoil of war, it was transferred to the British after the defeat of Napoleon and the signing of the Treaty of Alexandria in 1801. Historian David Gilks notes that in the eighteenth and nineteenth centuries, the British and French paid little attention to “international norms” for the objects they spirited out of the Ottoman territories (see: the Parthenon marbles).

“The implicit rhetorical justification in France during Bonaparte’s expedition was that gathering study materials was part of a broader civilizing mission to regenerate Egypt by restoring the land to its ancient greatness under the Pharaohs,” he explains.

In 1802, the stele was moved to the British Museum, where it’s been ever since.

There had been efforts to read hieroglyphs before Champollion addressed the task, such as those undertaken by the ninth-century Arab alchemist Abu Bakr Ahmad Ibn Wahshiyah, who successfully deciphered several signs. Yet the finding of the Rosetta Stone and the subsequent wide circulation of reproductions of it and its text led to renewed efforts. (Champollion, for instance, never saw the stone in person.) Thomas Young, a British natural philosopher who started his research in 1814, connected the hieroglyphs in the oval cartouches to phonetic sounds for Ptolemy’s name. Champollion then went deeper, analyzing not just the Rosetta Stone but also the relationship between languages such as Egyptian Coptic and the scripts, thus creating an alphabet through which the sound of hieroglyphic language could finally be heard.

Centuries later, the Rosetta Stone’s impact on culture stretches far beyond the study of the ancient world. In the nineteenth century, it spurred a wave of Egyptomania in art and design, the same way the opening of King Tut’s tomb would a century later. Its name has now graced a space probe to study the early solar system as well as a popular language app, and it’s shorthand for a key to understanding anything. At the British Museum, it remains one of the most popular displays, with themed snow globes, shoulder bags, t-shirts, and totes available in the gift shop.

Amidst renewed calls for its return to Egypt, including from archaeologist and former antiquities minister Zahi Hawass, the British Museum is making it the centerpiece of its Hieroglyphs: Unlocking Ancient Egypt exhibition, which opens on October 13, 2022. In France, there are now two museums dedicated to Champollion, one at his family home in Vif, which reopened last June after being named a Musée de France by the Minister of Culture. Meanwhile, the Louvre-Lens outpost is opening an exhibition on Champollion on September 28, 2022.

With all this attention paid to the Rosetta Stone, its meaning beyond an object used by European scholars to unlock an ancient script is frequently overlooked. The moment in which it was created to spread the reputation of a ruler—literally as the stelae were erected around the kingdom—and the use of language to assert that ruler’s power is also a part of its history. As museums are now reckoning with the looted provenance of many objects in their collection, the stone is also an object inextricably linked with the conquests of colonial powers in the eighteenth century. The Rosetta Stone is a key to the past, but it also carries forward these colonial legacies and reckonings toward the future.

In the Time of the Rosetta Stone
By: Jason Urbanus
Archaeology, Vol. 70, No. 6 (November/December 2017), pp. 50–55
Archaeological Institute of America
The Geology of the Rosetta Stone
By: Andrew Middleton and Dietrich Klemm
The Journal of Egyptian Archaeology, Vol. 89 (2003), pp. 207–216
Sage Publications, Inc.
Decipherment and Translation: An Egyptological Perspective
By: Jennifer Westerfeld
CR: The New Centennial Review, Vol. 16, No. 1, Translation and the Global Humanities (Spring 2016), pp. 29–36
Michigan State University Press
Attitudes to the Displacement of Cultural Property in the Wars of the French Revolution and Napoleon
By: David Gilks
The Historical Journal, Vol. 56, No. 1 (March 2013), pp. 113–143
Cambridge University Press 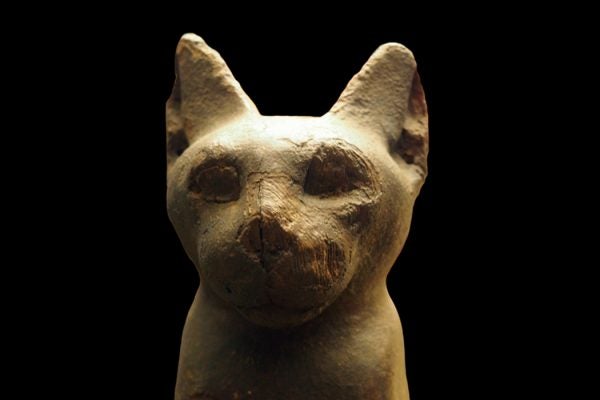 Ancient Egyptians' love of cats developed from an appreciation of their rodent-catching skills to revering them as sacred creatures.