The bankers and entrepreneurs of Montana Territory turned to the race track to bolster their reputations. The men of Montana had an image problem. Many had arrived from the Eastern seaboard seeking fortune, whether earned through raising cattle or mining ore. But when the luckiest among them struck (or ranched) it rich, they still seemed to feel a sense of inferiority—too rough, too tumble—when compared to the businessmen back home. One way to counteract this feeling was to meet Eastern interests where they stood, which, in the late nineteenth century, was very often at the racetrack.

As historian Catharine Melin-Moser explains, in the late nineteenth century, “horseracing was the dominion of wealthy industrialists and financiers, who unstintingly supported the region’s tracks and owned the breeding farms.”

Montana-raised horses “would be endowed with superior lung capacity, strength of bone, and endurance.”

Westerners like Noah Armstrong, who made his fortune managing silver, gold, copper, and lead mines, believed Eastern supremacy at the track could be undermined with tough Thoroughbreds “nourished by native bunchgrass and toughened by high altitude.”

Montana-raised horses “would be endowed with superior lung capacity, strength of bone, and endurance. Pitting the horses against the East’s finest, and winning, would prove legitimacy of the breeding operations. The state itself would benefit. To Montana’s most prominent industries—agriculture, mining, and timber—would be added a fourth, horse breeding.”

Armstrong certainly put his money where his mouth was, sinking thousands of dollars into developing his Doncaster Ranch and filling it with notable bloodstock. His most significant investment was a Thoroughbred colt sired by Hyder Ali out of the mare Interpose. Though bred in Illinois, the colt was foaled in Armstrong’s barns, re-rooting its lineage in Montana Territory.

In a strategic move, Armstrong named the colt “Spokane,” forever linking it to the geography and colonial history of its home. “I had two reasons in view,” Armstrong claimed, “first to honor Spokane Falls Washington Territory and secondly, because of an old Indian tradition. … In the language of the Spokane tribe, the word Spokane means ‘Children of the Sun.’”

As a three-year-old, Spokane dominated the Kentucky Derby, setting a new world record. Follow-up wins at the Clark Stakes and the American Derby seemed to confirm Montana’s potential as breeding grounds for top-notch racehorses—at least in the eyes of Montanans. “The whole civilized world knows what Spokane has done, and they know that Spokane is a Montana production,” boasted a newspaper out of Helena.

Other Montanans also attempted to gain legitimacy through horse racing. Even before Armstrong sent Spokane to the post for his first race, Samuel E. Larabie, a banker out of Deer Lodge, was acquiring racehorses in Kentucky and managing their training remotely. And as these horses, including Poet Scout, victor of the 1891 Hickory States, were making headlines, “Copper King” Marcus Daly began putting up jockeys on horses trained on his own Bitter Root Stock Farm south of Missoula. At one time, Daly’s barns held some 1,200 horses, demonstrating his capacity for spending, if nothing else.

Some of Daly’s investments paid off, first on the back of Tammany, a chestnut bred in Tennessee. Running as a 60-to-1 dark horse in his debut race, Tammany won by two lengths, much to the dismay of the bookmakers. After winning several more major stakes races, Tammany entered the starting box for an 1893 East vs. West match race, lining up against (also) Tennessee-bred Lamplighter. Tammany’s win by three lengths was the ultimate confirmation of Western superiority—again, at least for Montanans.

“Montanans had laid down their last dollar on Tammany,” Melin-Moser notes, “one thousand of them milled around a Butte pool hall waiting for dispatches.”

Despite the reputations quickly gained by Spokane, Poet Scout, and Tammany, their names are hardly familiar to today’s racegoers. It would seem that Montana bunchgrass never truly overtook Kentucky bluegrass in the high stakes game of Thoroughbred horseracing.

Editor’s Note: This article has been updated to expand a date range, correct a name, add a missing word, and delete an extra preposition in a quote. 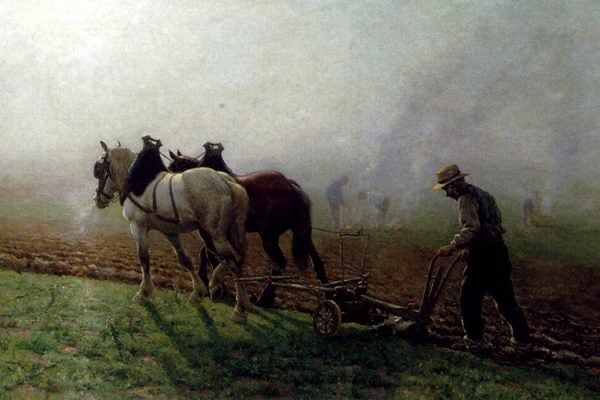