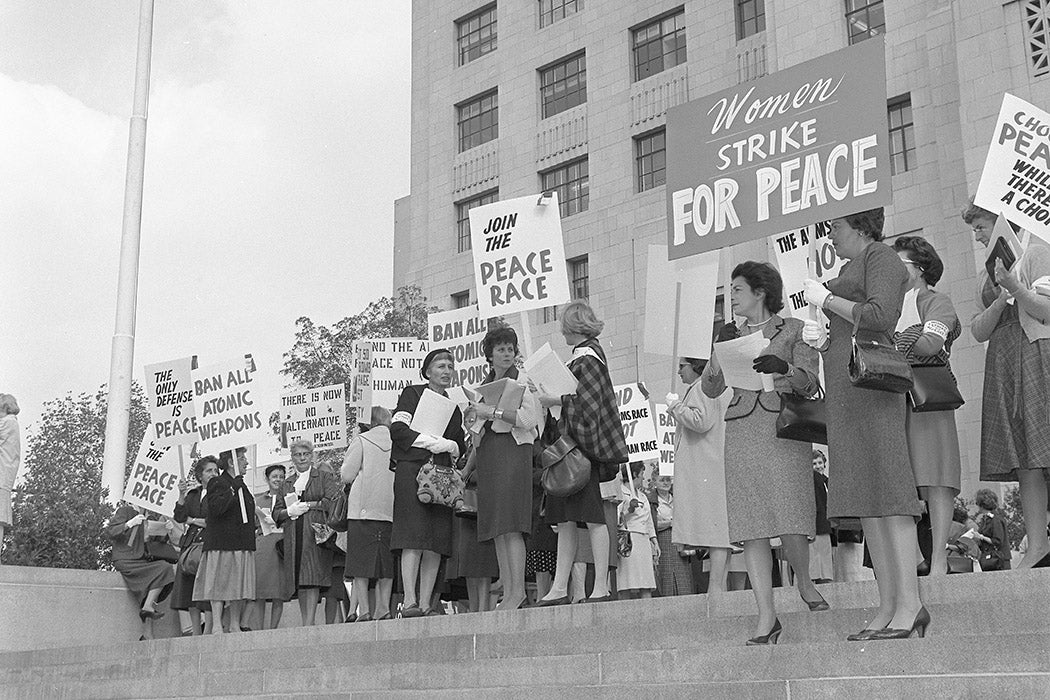 On November 1, 1961, some 50,000 women in sixty US cities came out to protest nuclear war and atmospheric nuclear testing, compelled by revelations of radioactive contamination of cow’s milk from fallout. It wasn’t the first time a group of women came together for peace in the US. A decade earlier American Women for Peace had organized the Women’s Workshop at the 1961 American People’s Peace Congress, but this was the largest women’s peace protest America had ever seen up to that date.

This was the inauguration of Women Strike for Peace (WSP), a new organization that wasn’t very organized, at least in the traditional top-down sense.

“This spontaneous women’s initiative baffled both the press and the politician.”

“Coming on the heels of a decade noted for cold war consensus, political conformity, and the celebration of female domesticity, this spontaneous women’s initiative baffled both the press and the politicians,” writes historian Amy Swerdlow.

They were “perfectly ordinary women, with their share of good looks,” wrote a Newsweek reporter, describing them with the naked sexism of the day. And the women “seemed to have emerged from nowhere,” notes Swerdlow. They had organized by word of mouth, telephone, church groups, and Christmas card lists. “They belonged to no unifying organizations, and their leaders were totally unknown as public figures.”

Which made it all the harder for the House Committee on Un-American Activities (HUAC) to get a grip on them. True, the FBI spied on WSP from its first public meeting in October 1961, but the committee took a full year before subpoenaing a baker’s dozen members, including national spokesperson Dagmar Wilson, to testify in Congress about supposed communist influence on the group.

HUAC would exist until 1975, but in December 1962, it already wasn’t what it had been in the peak of Cold War hysteria. The confrontation with the women of WSP, so soon after the Cuban Missile Crisis brought the world to the brink of nuclear war, turned out to be rather more than HUAC could chew up and spit out.

“This three-day battle of political and sexual adversaries, […] resulted in a rhetorical victory for the women of WSP and a deadly blow to the committee,” writes Swerdlow.

WSP didn’t have membership lists, so witnesses couldn’t name names even if they wanted to. But the point was: they didn’t want to. They made a decision not to “cower” before HUAC, “to resist the demonology” of the Cold War’s domestic terror, and to support a “sense of sisterhood, on feelings of identification with and empathy for the women singled out for attack.”

Stating that it didn’t matter if participants in WSP activities had communist pasts—or presents—the HUAC witnesses re-wrote the strategy of American dissent. Organizations like the Committee for a Sane Nuclear Policy (SANE), the established ban-the-bomb group, had been Red-Scared into dutifully purging those with, or rumored to have, tainted pasts. WSP would boldly not do the same, declaring, “The time is long past when a small group of censors can silence the voice of peace.”

Women filled the hearing room, some with their babies, standing en masse as witnesses were called. They also handed bouquets of flowers to those testifying and gave them standing ovations when finished. Neither HUAC nor the press had ever seen anything like it. And the press, if not the committee members, loved it.

The FBI had in fact found some women strikers with communist associations. For instance, Blanche Posner, a retired NYC high school teacher, was the volunteer office manager for New York WSP. She invoked the Fifth Amendment forty-four times—once a sure way of being shunned if not prosecuted, but now earning applause. Posner also “took matters into her own hands, lecturing the committee members as though they were recalcitrant boys.”

Noting that WSP’s press strategy was to pitch two stories, “motherhood under attack” and the “battle of the sexes,” Swerdlow writes that the women “relied heavily upon sex role stereotypes to legitimize opposition to cold war policies.” It was precisely as mothers that they stood against the bomb and radioactive milk. HUAC couldn’t gain any traction by being against mothers.

John F. Kennedy and others credited WSP for helping to push for the Partial Test Ban Treaty, which was signed in August 1963. That wasn’t the end for WSP, though: the next month, they set up a committee to study the “Vietnam situation”—more than a year and a half before the first national anti-war demonstration.