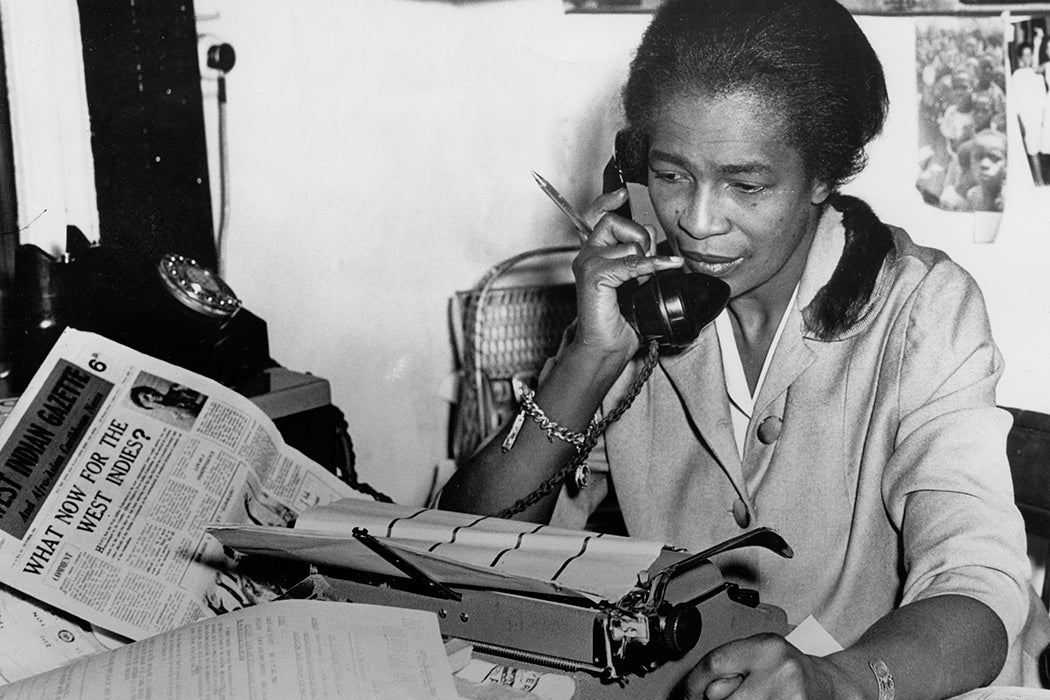 Trinidad-born journalist and activist Claudia Jones at the offices of The West Indian Gazette in 1962. Jones joined the Communist Party in 1936.
Getty
By: Matthew Wills
3 minutes
Share Tweet Email Print

During the 1930s, the New Deal’s efforts to drive economic recovery had a dirty not-so-secret. To get the support and votes of southern whites in Congress, President Franklin Roosevelt had to water down relief efforts for African Americans. Even with programs that attempted to be race-blind, the South’s white administrators did their best to deny federal assistance to African Americans. Discrimination and segregation were still the name of the game, even in economic collapse.

In response to the grim conditions of the Great Depression—which exacerbated already terrible conditions for many African Americans—some Black activists turned to radical venues. Some joined the Communist Party of the United States of America (CP), including notable African American women. Historian Lashawn Harris explores their motivation: “Many working-class black women looked to the CP and other militant groups for assistance in confronting the day-to-day problems of unemployment, unfair relief distribution, and persistent race-based discrimination.”

Until fairly recently, historians have often glossed over what Harris calls “the dynamic role of African American women within the CP.” Citing the growing literature, Harris looks into the experience of the “many African American women who came from various socioeconomic backgrounds and geographical regions and who possessed varying levels of political experience and education” who became CP activists in the 1930s.

This required courage. For one thing, it meant defying social expectations for Black women at the time. “By transcending middle-class notions of respectability,” Harris writes, “African American women leaders within the CP offered alternative images of female reform, and demonstrated their willingness to embrace radical strategies for relieving the suffering that workers—male and female, black and white—experienced during the depression decade.”

The reason the party appealed to some African American women was that the it made a point of campaigning against “racism, inadequate relief payments, and unemployment” and for uniting Black and white workers. Communist organizations, like the League of Struggle for Negro Rights and the Unemployed Councils, were focused on activism: they did things on the streets; you could call on them when the eviction notice came.

The International Labor Defense, another CP group, helped in the decade-long legal defense of the “Scottsboro Boys”—nine African American teenagers sentenced to death for rape—which “galvanized African American support for the CP.” Overseas, the Soviet Union seemed to have enlightened views toward minorities, and the Comintern (Communist International) “endowed” the struggle of African Americans with “unprecedented dignity and importance.”

Harris notes that African American women in both the rural South and the urban North felt empowered by party membership. Black Communist women flipped the script on the way African American activist women were supposed to act. “Respectability” was key to traditional activists, who sought to counter racial stereotypes. This did not include making street-corner speeches, leading boycotts, or joining picket lines, things Communist women—sometimes against the wishes of Communist men, black and white—were at the forefront of.

As Harris notes, all this worried less-radical African American leaders and their white allies. Communism signified the Soviet Union—and, in fact, the USSR kept a tight rein on the American party through the Comintern. In 1931, the head of the NAACP called out CP women as “ignorant and uncouth victims who were being led to the slaughter by dangerously bold radicals.”

The CP’s involvement in the Black freedom struggle would, of course, be used against it. Decades later, at the height of the Cold War, it was still standard operating procedure for segregationists and the FBI alike to declare that the movement for civil rights was directed from Moscow.

Editor’s note: The title of this article was updated–“African-American” was changed to “Black.”