Everyone in Pompeii Got Takeout, Too

Archaeologists have found that snack bars called tabernae fed much of the city in the shadow of Mount Vesuvius. 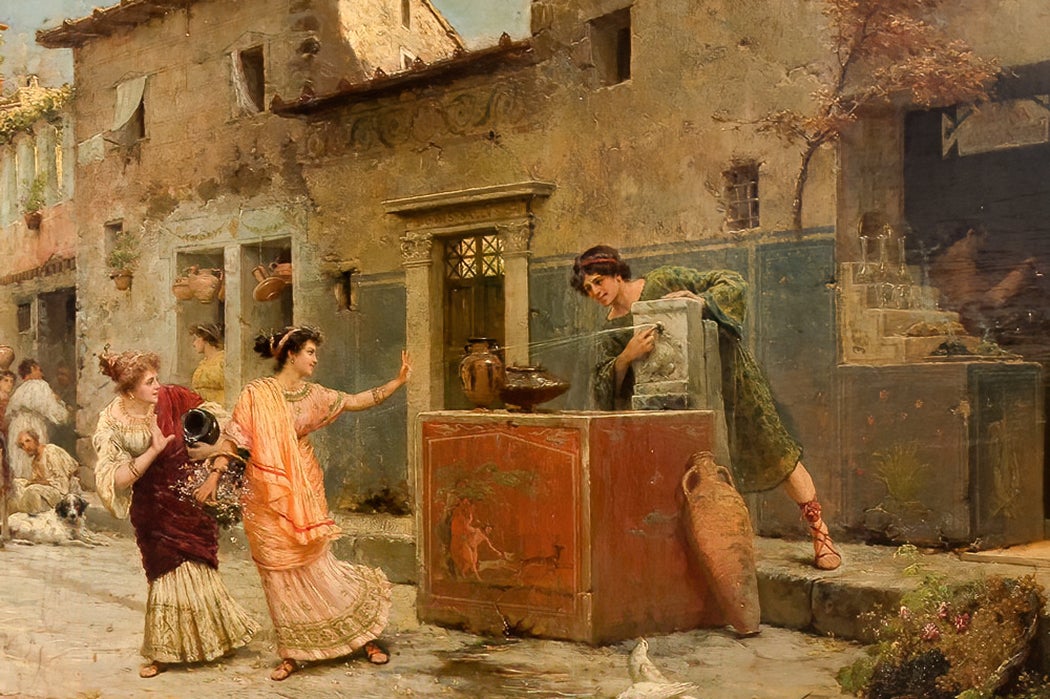 As we witness food takeout proliferating in the place of sit-down restaurants, it’s a good time to look back to earlier forms of grab-and-go eats. For example, in the ancient city of Pompeii, archaeologists have identified 158 separate snack bars, known as tabernae or thermopolia in Latin. They were especially abundant near the city’s gates, baths, forum, and amphitheater, according to ancient historian Wilhelmina Jashemski.

Roman tenement kitchens were either nonexistent or major fire hazards, so cooking at home was dangerous at best.

Tabernae provided a bevy of hospitable services, from hostel rooms to food and wine. They were often located on the first floor of apartment blocks (insulae). Pompeiians living in the teetering tenements could shuffle down the fragile staircases and spend a handful of hard-earned sestertii to get a meal to go before heading off to work. Roman tenement kitchens were either nonexistent or major fire hazards, so cooking at home was dangerous at best, impossible at worst. The presence of tabernae was an economic necessity.

Tabernae beverage menus ranged from the cheapest items, like posca, a vinegar-and-wine mixture common to the army, to more mature vintages from vast vineyards on Mount Vesuvius or the city itself. They also offered plenty of food not too dissimilar from our own. For example, botanist Frederick G. Meyer collected data sets of preserved food found in Pompeii and its surrounds. Meyer noted that, remarkably, “these materials were recovered principally from dolia [jars] and other storage containers in commercial shops and in houses.” Among those dried goods found were remnants of fruits, namely figs, plums, and grapes, not to mention chestnuts and lentils. Excavations from tabernae in nearby Herculaneum yielded more figs, plus legumes and pine nuts, which would be served alongside plenty of meat dishes.

How did Pompeiians experience tabernae? In a study of Pompeiian hospitality, business historians Kevin O’Gorman, Ian Baxter, and Bernadette Scott identified a taberna in the archaeological record by its  “simple L-shaped marble counter, six to eight feet long, with a simmering pot of water and shelves of other food on the back wall of a tiny room[.]” Large storage vats for wine were built into the shop counters, making it easier for a waiter to get a cup of wine or a scoop of garum, fermented fish sauce, to season a dish. O’Gorman, Baxter, and Scott noted that tabernae and other public spaces “have been found together with detailed kitchens and bakeries, some with fossilized loaves of bread,” which provides “proof of the advanced technology used on a daily basis by the people within organised and structured social spaces[.]”

While that technological know-how didn’t result in the third-party food-delivery apps we know today, a quick bite from the shop downstairs was a necessary part of daily life in ancient Roman culture. So, when in Rome…