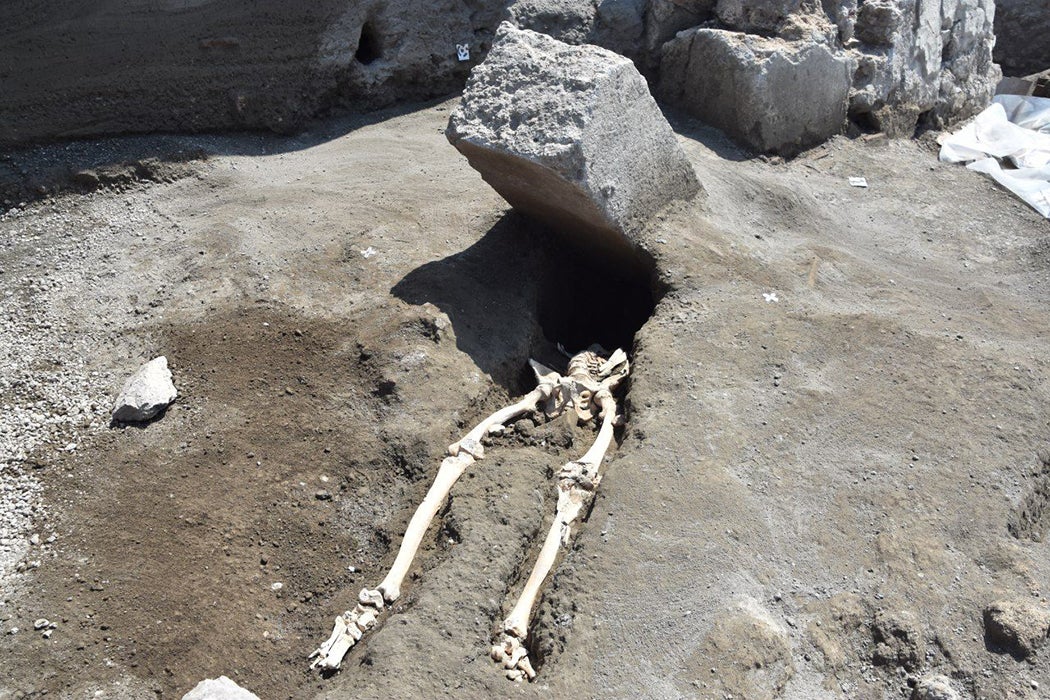 The site of the Roman city of Pompeii was discovered by workers digging a canal in 1748. As Pliny the Younger described it, in 79 C.E., nearby Mt. Vesuvius erupted violently, bombarding the city, which was still recovering from an earthquake in 62 C.E, with ash and pumice. Many survivors were subsequently overcome by a second cloud of ash and gas that completely buried the city. Recent excavation work has unearthed previously undiscovered remains, including the skeleton of someone who was crushed by a huge rock, presumably while trying to flee the ash cloud.

But after more than two hundred years of excavation, the bar for what makes an exciting discovery is set pretty high. The ash rapidly covering the city preserved not just the city’s structures, but its inhabitants as well. People were covered by the ash, which perfectly formed around their bodies. When the bodies decomposed, the hardened ash made exact molds of the people. Excavators were careful not to break these cavities. By drilling a small hole into the mold and filling it with plaster, they were able to create perfect sculptures.

At Pompeii, a complete cross section of Roman society is on display.

An 1877 description of the site in Scientific American conveys how these intimate, almost obscene, portraits of ordinary lives at their end have always fascinated people. The anonymous author of the article viewed the sheer volume of the dead as “food for sad thought.” Death scenes are embellished with speculation about the final moments and described in poetic terms: a young woman’s body leaving an impression in the ashes “like a seal of softened wax;” victims huddled in “their agony of fear.”  While they died centuries ago, their afterimages still haunt us. A woman leading three children by the hand toward safety they would never reach; a dove still sitting on its eggs; a young couple embracing as they fell. In a truly remarkable display of Roman military discipline, a sentry remained at his post, face covered to keep out the choking ash, his sword still in hand after 1,800 years. Other discoveries were equally remarkable; an oven was found full of bread loaves still bearing imprints of the long-ago baker’s fingers. A restaurant contained fried fish and various preserved treats.

Pompeii was a regular working town, not a military garrison or other specialized site. A complete cross section of Roman society is on display, all practically intact. Restaurants, taverns, brothels, the public baths, the forum, and the amphitheatre all remain almost as they were the day they were buried. But as described by Amadeo Miaduri, the houses are the real treasure. Houses of the rich, poor, and middle classes, urban and suburban, were all were equal under the ash. Many houses had perfectly preserved statues, wall paintings, even elaborate mosaic floors or private adjacent orchards.

The really amazing thing about Pompeii is its ordinariness. It portrays regular life, and eventually death, preserved in almost perfect detail. Walk the streets today, tune out the tourists and the hucksters, and one can almost imagine the town as it was.