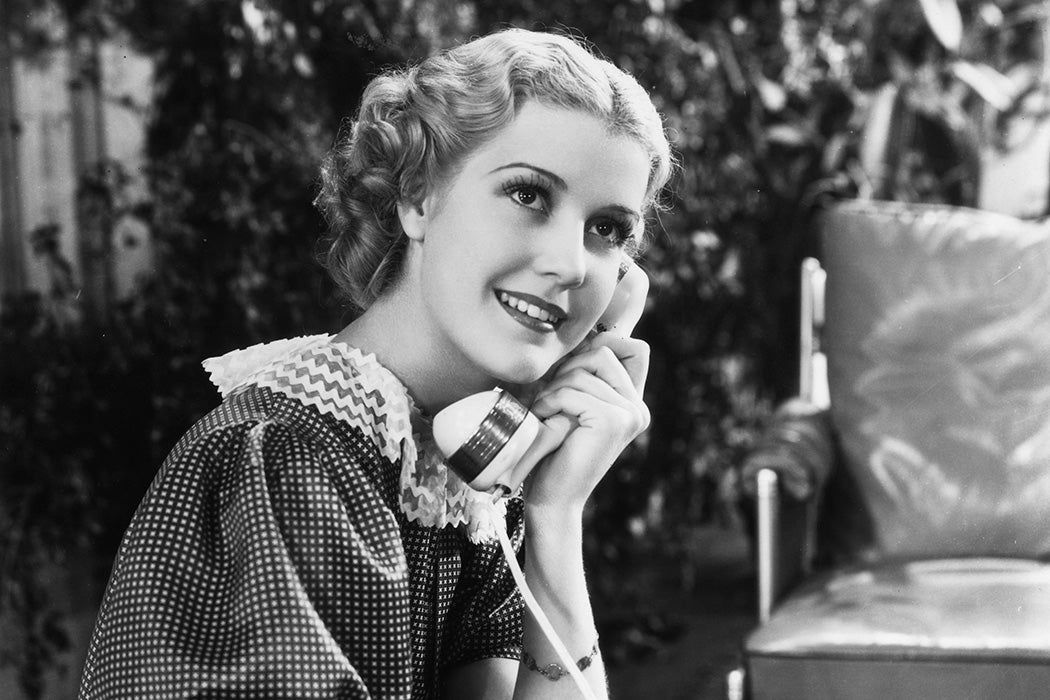 Anita Louise chats on the telephone in a scene from The Gay Lady, 1935
Getty
By: Livia Gershon
3 minutes
Share Tweet Email Print

As many of us have started spending hours on Zoom, we’ve learned new ways to present ourselves, adjusting speaking styles, lighting, and camera angles. In the late nineteenth century, English and media studies scholar Stefan Schöberlein writes, the telephone encouraged similar changes, in distinctly gendered ways.

In the 1870s, before most people had ever talked on a telephone, the technology was already seen as feminine. In many romantic stories of that time, men struggled with phones while women used them with ease. Schöberlein describes the dynamic in Mark Twain’s 1878 science-fiction romance “The Loves of Alonzo Fitz Clarence and Rosannah Ethelton”:

The woman authoritatively defines the parameters of calls and has the power to terminate communication—leaving men to respond only with a sort of “telephonic madness”: Rosannah’s future husband goes temporarily insane and begins perching on telegraph poles…

Other stories revolved around a man’s pursuit of a phone operator he met by chance while making a call. Schöberlein writes that the women in this kind of story displayed little personality, though they did inevitably have one remarkable trait: a good voice.

“If one desires to select the right kind of wife, one should never see the lady, but should talk with the applicants over the phone first…”

If one desires to select the right kind of wife, one should never see the lady, but should talk with the applicants over the phone first… Selfishness, sympathy, shallowness, cultivation, reserve strength, control, and the capacity to bore—all these things and many more are revealed in a women’s voice.

For both men and women in the telephone era, a good voice came to be connected with the use of Standard English. In previous times, Americans enjoyed regional dialects in both real life and written work. But, given the low-fidelity sound of early phones, many listeners found it hard to understand regional speech patterns. Men, in particular, were apparently hard to understand. As a turn-of-the-century encyclopedia explained:

If you listen to an average woman speaking and compare her voice with that of an average man of her own class, you will notice, among other things, that her enunciation of words is better; also that there is less tendency to cut the ends of words or to drop the voice and mumble the terminations… [T]here is a natural purity of diction.

Actually, Schöberlein points out, there was nothing particularly natural about this difference. Given the growing importance of the voice, in the late nineteenth century educational institutions from elementary schools to universities began offering voice instruction to female students. They learned to speak clearly and precisely without straining their vocal cords.

All this meant that men who spoke clearly over the phone might come across as feminized. In one 1895 romantic story, when a man speaks through a telephone, his voice “became very soft…and very distinct,” even “cooing.”

Today we may have parallel worries about self-presentation on Zoom, but at least if we want to find instructions on how to do better, we can probably find them on YouTube.

A German musicologist complained in 1954 that they reminded him of "barking hell-hounds."