When Chestnuts Were an Everyday Food

Even if you haven’t actually roasted chestnuts on an open fire, you probably associate them with winter. But once they were a common year-round food. 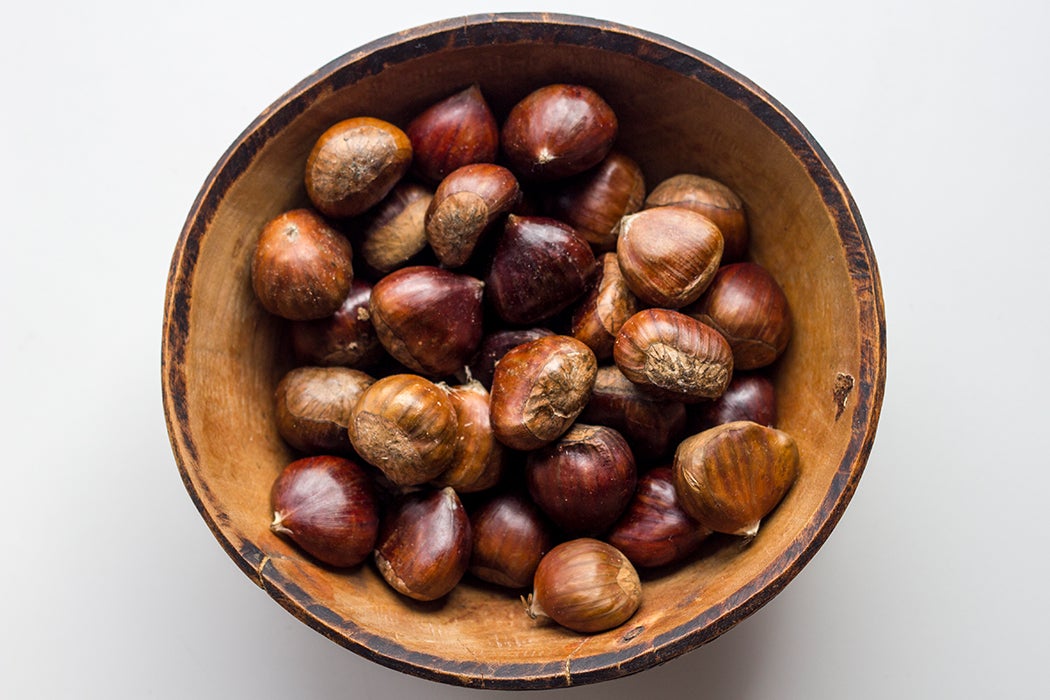 There are few foods more specific to the winter holiday season than chestnuts. Whether we’re mixing them into stuffing or roasting them over an open fire (or just singing about it), they’ll probably be gone from our kitchen after the New Year. Historian Ralph H. Lutts reminds us that until about a hundred years ago, however, chestnuts were a staple food for many Americans.

Enormous American chestnut trees flourished along the eastern United States, from southern Maine down to Georgia and as far west as Ohio. Lutts focuses on southern Appalachia, where the trees were especially dominant. In many cases, the trees were part of large tracts of common land, open for all to forage. That made them particularly valuable to enslaved and impoverished people.

As one mountain woman put it, “A grove of chestnuts is a better provider than a man—easier to have around, too.”

Appalachians depended on chestnut trees for strong, easily-worked wood, for tannins used in the tanning industry, and for folk medicines that could be made from its leaves. They also ate a lot of them—if they could beat the animals to the windfall. “You had to beat the turkeys to the chestnut tree in the morning if you were to get very many,” one Floyd County resident wrote.

Another Virginian recalled the respite from hunger that chestnut season offered. “There was a time of year when we had food,” he wrote. “That was in late fall after the gusty winds of a chestnut storm left the ground strewed with nuts. Pa and Ma would take us out by lantern light to beat the hogs to them.”

Of course, Lutts writes, letting pigs or turkeys feed on chestnuts indirectly fed the people too. So did selling the nuts at local general stores. One Georgian remembered seeing country families who rarely travelled into town lugging sacks to the store in the fall. “They’d all trek to the store and they’d swap that for coffee and sugar and flour and things that they had to buy to live on through the winter,” he remembered. “That’s the way they made their living.”

As one mountain woman put it, “A grove of chestnuts is a better provider than a man—easier to have around, too.”

Selling the chestnuts required a willing buyer, but they were free for the taking locally. In Kentucky, sending chestnuts elsewhere for sale became possible starting in the early 1860s, thanks to steamboats. In the decades that followed, roads and railroads expanded the trade throughout the region. Some locals sold their chestnuts to general store owners or door-to-door peddlers who acted as middlemen. Others made their own deals with wholesalers, shipping packages of nuts at the railroad stations. By 1914, Lutts writes, records suggest Virginia’s cash crop of chestnuts added up to two million pounds.

Already, however, it was the beginning of the end for the American chestnut. A massive blight had begun to spread. By 1940, almost eighty-five percent of the chestnut trees in the Great Smokey Mountains were dead and the chestnut was receding into a nostalgic novelty in the American diet.