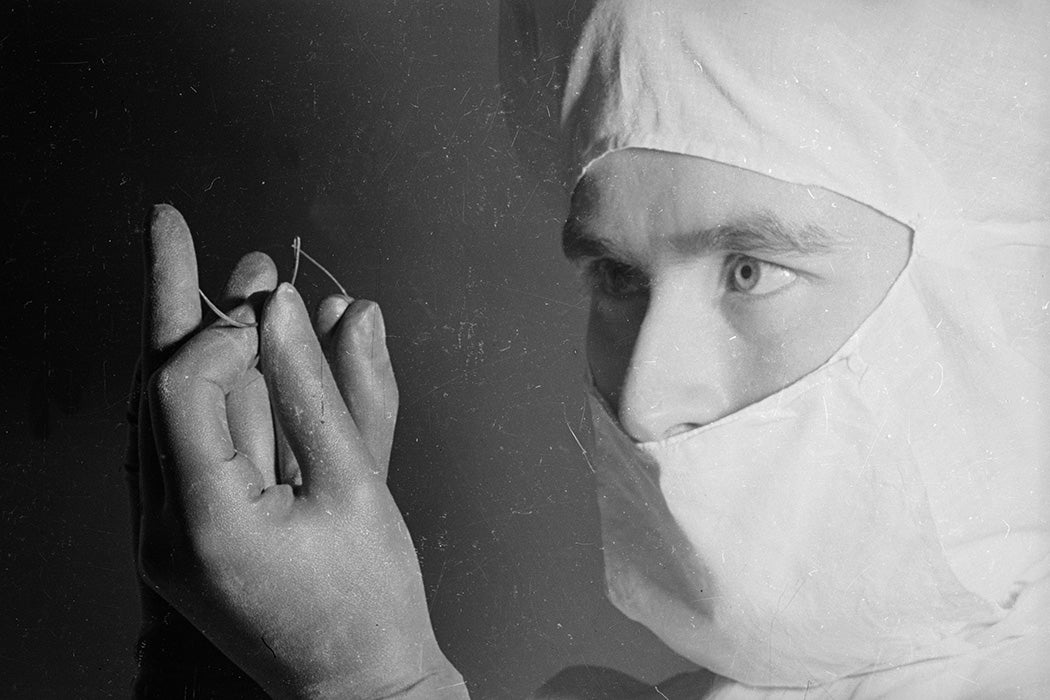 A man wearing a surgical mask and gloves threading his needle with suture before an operation, 1940
Getty
By: Jess Romeo
3 minutes
Share Tweet Email Print

As certain sectors of American society “debate” wearing masks in public during a pandemic, scientists are baffled. How can people avoid facing such an obvious medical reality? But this isn’t the first time groups have resisted the adoption of a new accessory designed to protect others.

“Many historical accounts show deep impatience with past surgeons’ hesitation to adopt surgical gloves,” writes Thomas Schlich, historian of medicine. Before gloves, surgeons would root around in their patients’ body cavities with their bare hands. It would take “more than a decade of passionate argument” before surgeons finally accepted gloves as a necessity.

“A whole apparatus of pseudoscience was mobilized to inaugurate the new fashion of the surgeon in gloves.”

The controversy surrounding surgical gloves was spurred by a growing movement promoting asepsis (complete sterility) over antisepsis (killing bacteria after they got into a wound). Asepsis, a concept championed by surgical pioneer Joseph Lister, required the doctor to completely sterilize instruments before surgery, usually by boiling them. Hands, unfortunately, are classified as “non-boilable” objects.

And so it was that on April 13, 1898, the Twenty-Seventh Congress of the German Society for Surgery devoted an entire afternoon session to the topic of gloves.

The Austrian surgeon Alexander Fraenkel wrote of the session that it “felt like a commercial fair, not like a scientific meeting befitting the dignity and importance of the occasion.” He continued: “For a whole afternoon participants discussed the best glove models.” In a sort of proto-fashion show, people were “marching up all the various specimens made from different materials, in all sizes and price ranges…. A whole apparatus of pseudoscience was mobilized to inaugurate the new fashion of the surgeon in gloves.”

Fraenkel would later publish an article decrying the use of gloves altogether, proclaiming them, in Schlich’s analysis, to be a “bizarre aberration, part of the equally bizarre ‘surgical costume’ with bonnet, mask, and veil that some of his colleagues had thought up to achieve the erroneous goal of complete sterility in operations.”

To be fair, some of the earliest attempts at surgical gloves seem a little bizarre today. Elbow-length fabric gloves of cotton or silk quickly became soaked with blood during surgery. Leather military gloves were tested but deemed too clumsy. One surgeon tried treating the fabric of his gloves with wax before surgery, in an attempt to make them less permeable. Some suggested putting wax directly onto the surgeon’s hands and forgoing gloves altogether (the idea never took off).

After much debate, and trial and error, one surgeon proposed that “the ideal glove had to fulfill five conditions,” writes Schlich. “It had to be (1) impermeable, (2) flexible, and (3) tear-resistant, (4) it had to not squeeze the skin too tightly and not get too hot, and (5) it had to be sterilizable.”

By 1907, impermeable rubber gloves had become cheaper and more durable, and their use began to grow more widespread. The technology was still imperfect: Schlich writes that these early rubber gloves “were easily torn by instruments and bone edges, and they still impaired surgeons’ sense of touch and…their slipperiness made it difficult to grasp and hold smooth organs such as the bowels.”

Despite these imperfections, doctors were forced to acknowledge that it was probably better not to spread their germs to other people, even if they had to be a little uncomfortable. Sound familiar?

Negotiating Technologies in Surgery: The Controversy about Surgical Gloves in the 1890s
By: THOMAS SCHLICH
Bulletin of the History of Medicine, Vol. 87, No. 2 (Summer 2013), pp. 170-197
The Johns Hopkins University Press 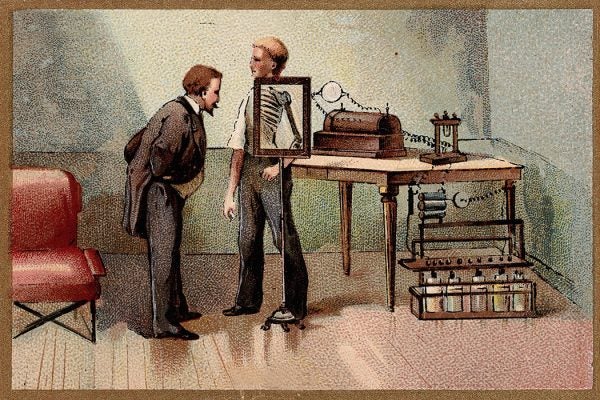