In the 17th century, these animals were prized for their musk. So when the not-yet-famous writer Daniel Defoe needed quick cash, he turned to civets. 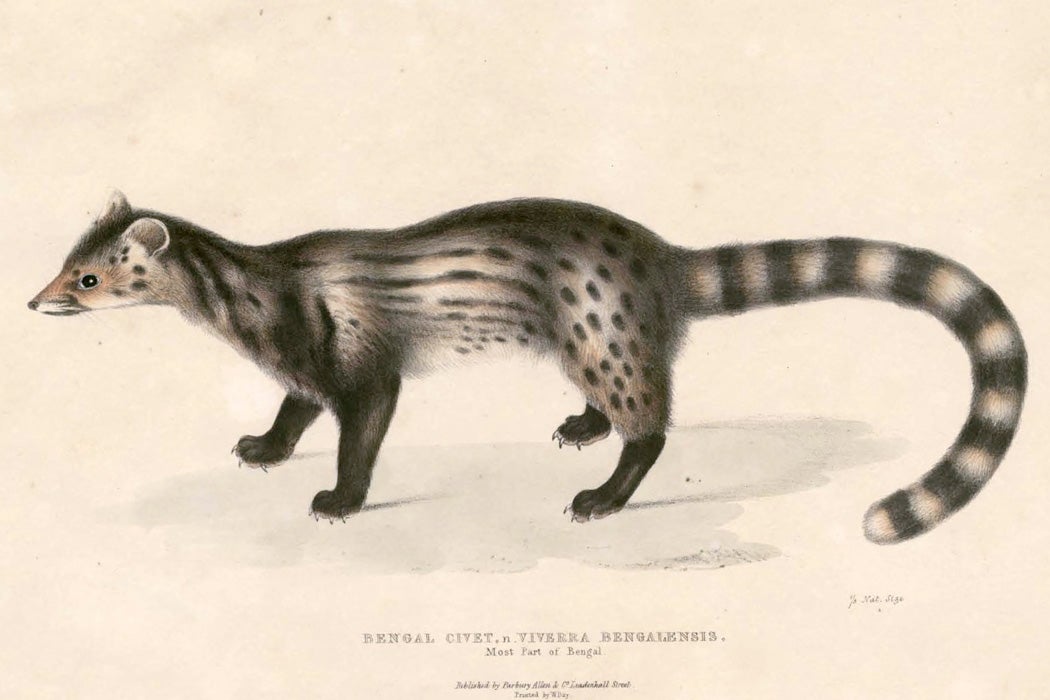 Today Daniel Defoe is best remembered for his books, especially Robinson Crusoe, Moll Flanders, and A Journal of the Plague Year. These were all later-life works. In his earlier days, he was focused on his financial books…which were a disaster. Inflation and the crash of the speculation frenzy had all combined to bring him to ruin in the early 1690s. He’d even burned through his wife’s £3,700 dowry (close to a million dollars in today’s money). His creditors were hard at his heels, threatening to send  him to debtors’ prison.

So what was the “harried and hunted” merchant to do to try and recoup his losses? Invest in “Civet Catts,” obviously. Scholar Theodore F.M. Newton details what was uncovered about Defoe’s get-rich-quick scheme from old court records dug up nearly 250 years after the fact. It is a “curious little story whose ill-assorted principals are our luckless merchant, his outraged mother-in-law, and seventy live civet-cats.”

Civet was used as a base for perfumes: the iconic Chanel No. 5 was boycotted in the 1970s for using it.

Civets aren’t actually cats, but in Defoe’s day they were thought to be some kind of feline, badger, or skunk. The last comparison is telling: Abyssinian civets in particular were prized for their smell. This was caused by a “buttery oil” extracted—usually by a painful scraping—from a pouch under the tail. The musk was used as a scent, also called civet, that was very popular in Defoe’s day. It was used as a base for perfumes: the iconic Chanel No. 5 was boycotted in the 1970s for using it. Civet was also considered a “cure-all for certain diseases of the head and brain, for fits and vapours, for bad hearing, barrenness, and depression of spirits.”

Newton’s verdict on the “wily” Defoe’s chicanery was that

the picture of Daniel Defoe put together from ten thousand words of litigation in the year 1693 is hardly a very pleasant one. In the shadow of the debtors’ prison, a fate in those days horrible to contemplate, he gambled for relief; and when he lost he turned to knavery.

The fate of Defoe’s civets, which seem to never have been his in the first place, is unclear. Newton found a later offer of sale for them. He also notes that Defoe and his mother-in-law eventually reconciled. Defoe went on to try his hand at journalism and fiction, and the rest is literary history.

Civets, meanwhile, have had a rough time of it. There are fifteen to twenty species, depending on who is counting. A couple of the species are in danger of extinction. In some parts of the world, people eat them. Since the civet coffee bubble burst, the animals only tend make the news in discussions of potential reservoirs for transmissible-to-human diseases like SARS. Perhaps the persecuted “cats” are getting their revenge.