The Story Behind “This is Your Brain on Drugs”

How did the campaign behind the Partnership for a Drug Free America’s iconic commercials develop, and why were its products so memorable? 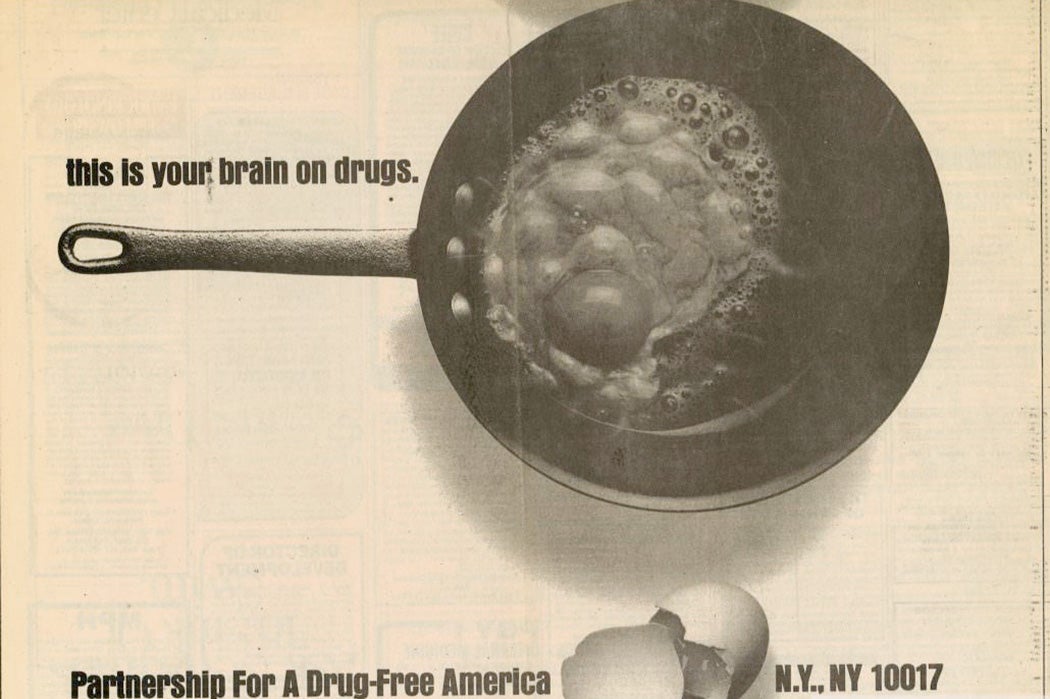 An advertisement by the Partnership for a Drug-Free America
By: Livia Gershon
3 minutes
Share Tweet Email Print

Decades before the meme age, it was the public service announcement (PSA) that sparked a thousand parodies. The egg. The frying pan. “This is your brain on drugs. Any questions?” What made this and other commercials created by the Partnership for a Drug Free America (PDFA) so iconic? What was the origin of the campaign? Joseph Moreau explores these questions in the Journal of Social History.

Moreau writes that the PDFA ads showed up on television in the 1980s, entering a conversation about how to talk to kids about drugs that had been going on for decades. In the postwar era, educators showed Reefer Madness-style educational films in classrooms, attempting to terrify students into abstinence from drugs. But the 1970s brought a wave of non-judgmental materials for students that invited them to learn about the effects of various substances and make informed decisions. To some parents, this seemed like a disturbingly blasé approach to the rising use of marijuana and cocaine among teenagers, and an ascendant conservative movement picked up on and amplified these concerns.

But what message did the PSAs send? One part of it was that “drugs” were a terrifying and monolithic evil.

It was in this environment that the American Association of Advertising Agencies coughed up $300,000 in seed money for the PDFA in 1986. At the time, its president, Lou Hagopian, suggested that the effort could improve the reputation of an industry “credited with—or sometimes blamed for—selling Americans fast food, soft drinks, cars and jeans.”

Ad firms donated time and talent to creating ads, which the PDFA curated and passed along to networks and TV stations. Many at the agencies saw this as a chance to do something positive while exercising creativity outside the oversight of their regular paying clients.

But what message did the PSAs send? One part of it was that “drugs” were a terrifying and monolithic evil—something exemplified in the frying-pan ad.

“Television advertising necessitates a relatively straightforward style, but this spot goes well beyond the demands of the medium,” Moreau writes. “It relies on a conscious, unapologetic refusal to engage in debate with a hypothetical opponent.”

Many of the ads used intense scare tactics, as in one where a teenage boy appears to be preparing for a big night out only for it to be revealed that he’s actually being dressed for his funeral.

Another unstated message of the spots was that it was only illegal drugs that should be feared. Moreau notes that it was essentially impossible for the PDFA to target legal drugs even if ad-makers wanted to. Television stations depended on revenue from beer and wine companies, and while tobacco ads were banned from TV by this point, they still appeared in the same newspapers and magazines that ran PDFA material. Even more tellingly, as the Nation reporter Cynthia Cotts discovered in 1992, the PDFA received funding from pharmaceutical, alcohol, and tobacco companies for years.

Beyond any questions of whether the sensationalist ads worked, Moreau suggests, the unmitigated activities of these corporate players “compromised any effort to make America truly ‘drug-free.’”

“I Learned it by Watching YOU!” The Partnership for a Drug-Free America and the Attack on “Responsible Use” Education in the 1980s
By: Joseph Moreau
Journal of Social History, Vol. 49, No. 3, Changes in Medical Care (Spring 2016), pp. 710–737
Oxford University Press