The Rise and Fall of Fanny Cradock

Cradock was one of Britain’s first celebrity chefs, but in what her viewers called “the Gwen Troake Incident,” she fell from her pedestal—hard. 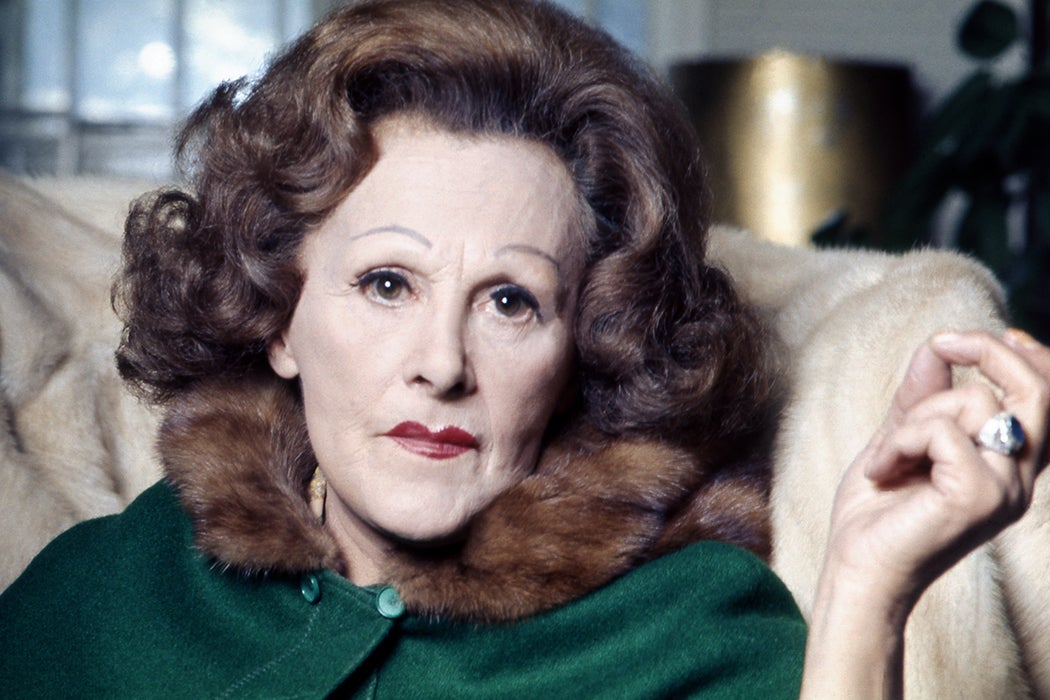 Fanny Cradock was a star. As literature scholar Marc Muneal explains, British media couldn’t get enough of their culinary queen. She “was an inescapable, larger-than-life personality on the airwaves, in print, and at live performances.” Cradock engaged audiences with cooking instruction in a style that was both effortless and, as Muneal notes, not a little intimidating. With husband Johnnie at her side, she set the tone for the country’s food entertainment in the 1950s and ’60s, even influencing American household names like Julia Child. But her legacy as celebrity chef would be tainted by a TV appearance gone wrong.

She and Johnnie first made their mark under the name Bon Viveur, the joint-pseudonym used for their hotel and restaurant review column. Later, under their own names, they became go-to experts on the subjects, leading to cookbooks and public shows. One performance, held at the Royal Albert Hall in December 1956, was sold out. Cradock arrived on stage draped in fur, Johnnie in a tux and with his trademark monocle. The monocle was a Cradock-approved affectation, Muneal explains, “believing that it looked more distinguished, more aristocratic.”

Though a team, “only Fanny was the star of the show, and she made sure that everyone knew it,” Muneal writes, and that set her apart. “Comparatively few women had such an opportunity on television—or in a very public marriage.”

As food writer Gwen Hyman points out, connecting with audiences is possibly more important than the food.

But don’t call Cradock a feminist. “[W]e are both anti-feminists,” the pair wrote in their autobiography. “Down with equality, we say.”

But even with this messaging (or maybe because of it), the public was still invested in the duo. Fanny had found a way to connect with her audience, “she attempted to make cooking more accessible and interesting through the medium of television.”

As food writer Gwen Hyman points out, connecting with audiences is possibly more important than the food. Chefs who brought their kitchens into living rooms across America, for example, “could become bona fide personalities […] Cooking…could make great TV when it was done right.”

Cradock had her finger on the pulse when it came to celebrity. But the same medium that brought her fame would be her undoing.

There were hints along the way that Cradock was slipping from her throne. One of her assistants, Sarah, who appeared on the 1975 special Fanny Cradock Cooks for Christmas, was part of an uncomfortable viewing moment. As Hyman described, Cradock yelled at her, “literally snap[ping] her fingers when something [was] necessary” from “a sheepish and visibly shaken Sarah.”

While this might have been a tough watch in the ’70s, Hyman points out that, in modern food TV, it would hardly be worth a mention. As food television evolved, so did its stars. They were “brash, exuberant, physical.” But maybe Cradock was ahead of her time—her brashness was her downfall.

Home cook Gwen Troake won a 1976 competition that gave her the chance to cook for “various nobles and officials,” and that meal would be aired as a reality show. She was assigned a mentor—Fanny Cradock. And Cradock, rather than offering the gentle advice that may have been expected, chided her by saying “you’re among professionals now.” On air, Cradock “twice pretend[ed] to throw up a little in her mouth.” It didn’t go over well, and following the “Gwen Troake Incident,” Cradock mostly faded from the screen.

A predictable result, Hyman explains, as “the cannibal act of celebrity is an act of immaculate consumption.” Once the persona no longer fits, the illusion is over. This was bad news for Cradock, Muneal writes, her “antics—considered mild by current reality television standards—could no longer be deemed suitable television viewing.”