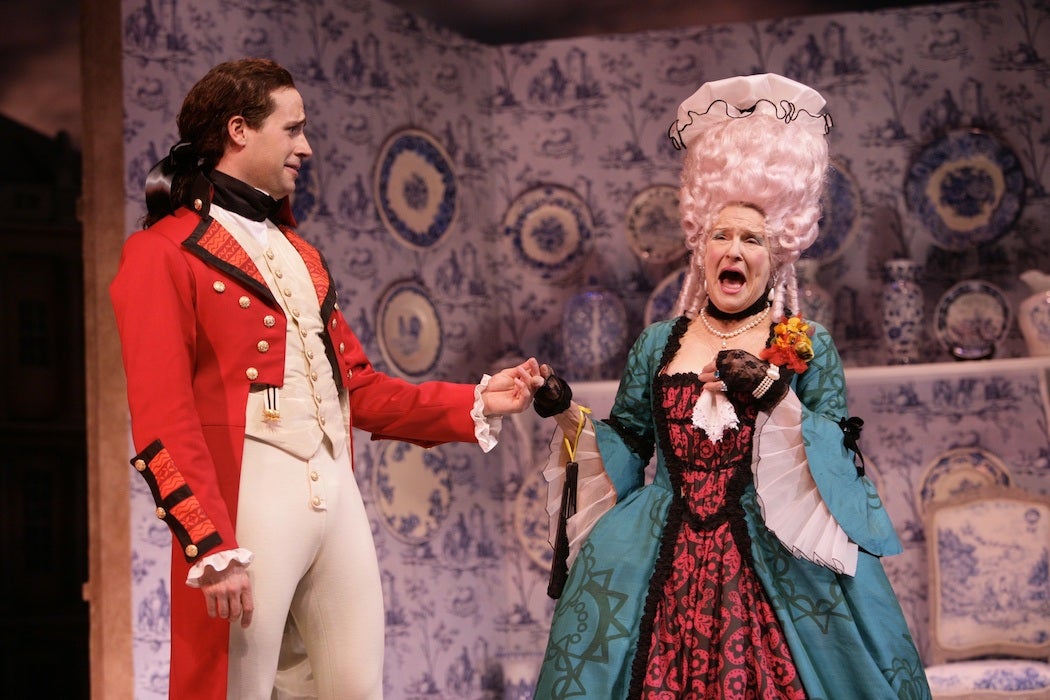 Mrs. Malaprop (from whom the malapropism got its name ) in a production of "The Rivals."
via Flickr user T. Charles Ericsson
By: Chi Luu
7 minutes
Share Tweet Email Print

“You have hissed all my mystery lectures. I saw you fight a liar in the back quad; in fact, you have tasted a whole worm. You will leave by the next town drain.”

Perhaps no Oxford don has been quite so celebrated for his error-prone speech than the absent-minded Reverend William A. Spooner, who lent his name to the often comical practice of switching around the speech sounds of different words. (“You have missed all my history lectures. I saw you light a fire in the back quad; in fact, you have wasted a whole term. You will leave by the next down train.”). Whether Reverend Spooner ever said those actual words or not, it’s true that spoonerisms and other such slips of the tongue can reveal some pretty interesting things about language—how we associate and map words and sounds in our brains.

We’re often told we should use language “correctly” but in fact performance errors are a natural part of speaking language. Everyone makes speech errors, and not just while attempting tongue twisters. From spoonerisms (“Can I sew you to another sheet?”) to malapropisms (“No one is the suppository of all wisdom”)  to portmanteaus (“And you quit footing the bill for these nations who are oil-rich, we’re paying for some of their squirmishes that have been going on for centuries.“), unintentional speech errors, as we’ve seen, are often accidentally humorous. The same innovative linguistic processes can be used to develop neologisms to great effect, not just for comedic purposes like punning but for attention-grabbing memorability in naming. From Brexit to Brangelina, whether you stick a spork in the tofurkey just before your Jazzercise class… or neither of these things, it’s curious how these Frankensteinian word forms, accidental or deliberate, still maintain a palpable sense of their own original identity, even as they’ve been broken apart and cobbled back together into monstrous new creatures.

Mentally, we’re already prepared with a map of the right sounds to produce, so that sometimes they influence each other during the speech performance.

Linguist Victoria A. Fromkin, an enthusiastic collector of speech errors, shows how these twists and turns of the tongue reveal the real underlying structures of language. Speech error data can tell us a lot about how we mentally anticipate the discrete speech sound segments that we inadvertently swap around and substitute for others as we stumble over our words. Speech errors occur for all sorts of sound structures from substitution (“cuff of coffee”), omission (“fresh clear water” -> “flesh queer water“), perseverance of the same sound (“irrepraceable”) to metathesis (transposing elements such as in the classic spoonerism) (“ad hoc” -> “odd hack“). This can also happen with full syllables, not just single consonants or vowels (“stress and pitch” -> “piss and stretch“). Mentally, we’re already prepared with a map of the right sounds to produce, so that sometimes they influence each other during the speech performance.

Then there’s the question of what speech errors reveal about how we organize our mental lexicon. David Fay and Anne Cutler look at malapropisms and the related semantic errors we often make in speech. Malapropisms of course are so named from Mrs Malaprop (from the French mal à propos, or inappropriately), a character from Richard Sheridan’s The Rivals, who was wont to use wrong words that happened to sound like the ones she wanted to use (“He is the very pine-apple of politeness!” -> pinnacle). Though it’s often viewed as stemming from ignorance, especially when politicians are making these amusing gaffes, it’s a fairly common speech error that can occur even if the speaker knows full well what the meanings of both the words are. In a similar way, we may naturally make other semantic speech errors such as anticipating what we mean to say in our heads… and confusingly replacing it with its opposite. We may also replace the word with a related word (“Don’t burn your fingers“/”Don’t burn your toes“) or in an even more confusing operation replace the word with another word that sounds like a related word (heritage/legacy -> heresy). As Fay and Cutler show, we mentally recognize and associate similar features of words, in terms of phonetics, stress patterns, and even related syntactic and semantic features in our mental lexicon. The more features two words have in common, the more easily they can be malapropped.

It’s these kinds of natural speech processes that also allow us to be playful with language in the way we coin new words. In the case of the portmanteau word (as popularized by Lewis Carroll) or blend (as linguists would have it), it’s developed into a trend, with new portmanteaus of all kinds abounding in modern speech. In a portmanteau, parts of words are stitched together resulting in a lexical monster of a word. Margaret M. Bryant states that blends are definitely on the increase in English, particularly since the early 19th century, when this method of coining new words was relatively rare. Robert Withington points out that (at least by the 1930s), it was also fairly rare to use proper names in a portmanteau. Fast forward to present day and we’re up to our eyeballs in portmanteaus, both good and bad. It’s not uncommon to have novel blends like Brangelina (Brad + Angelina) and Brexit (Britain + Exit) being bandied about, sometimes even found in serious publications discussing serious news, which is unprecedented for the oft-comical neologism.

Who would even remember that “vitamin” once came from “vital” and “mineral“?

So there are a couple of interesting things to say about that. Now, instead of just regular words being pulled apart and then merged into an often unholy marriage (I’m just going to leave jorts and jeggings here), fans and social observers of celebrities may mark a (well-known) couple’s relationship by lexically joining them at the hip. And just like other speech errors, there’s a science to how these blends can be best stitched together. For example, why wouldn’t we refer to Brad Pitt and Angelina Jolie as “Angelinad” or any number of possible permutations of bits of their names?

While blends have been increasingly used in many different areas, from the media, science, sport, politics to naming companies and products, many of these are now accepted as lexicalized, regular words. Who would even remember that “vitamin” once came from “vital” and “mineral“? In the same way we can still understand words and their meanings, even if they’ve undergone a kind of linguistic mutation process, the blends that work best still retain a memory of the parts of the words they’re composed of and bring those meanings to the neologism they’ve formed. One might say that Brexit was a socially successful branding exercise in this sense.

When they’re formed of names, those names have to be fairly well-known for the meaning of the word to be derived from their parts. At the same time, the two parts to the portmanteau have to be somewhat recognizable as those names, at least until the neologism becomes more widely known. There has to be an “instantaneous suggestion of its component parts”, as Withington puts it. In “Brangelina” the first syllable “Bran” has enough of a phonetic resemblance to “Brad” that fulfills this requirement, both in sound and in stress, and also happens to completely contain “Angelina.” The opposite rendering “Angelinad” does not have enough of a phonetic resemblance to “Brad” that it would be a failed blend. Consider other popular pairing portmanteau names such as Kimye (Kim + Kanye), where “Kimye” has enough of a phonetic and stress similarity to “Kanye” and also contains Kim, that it likewise works as a joint celebrity couple name.

Increasingly, blends are being used to draw two disparate suggestions into one concept. Though portmanteaus have been seen as comical, their increasingly widespread use shows they can also be an effective and innovative way to pair up two ideas succinctly, the reverse of speech errors like malapropisms and spoonerisms, with all their surreal whimsy. Not bad for a weird marriage of words, introduced by a slip of the tongue. At the very least, perhaps they’ll give us “a few laughs to break up the monogamy.” 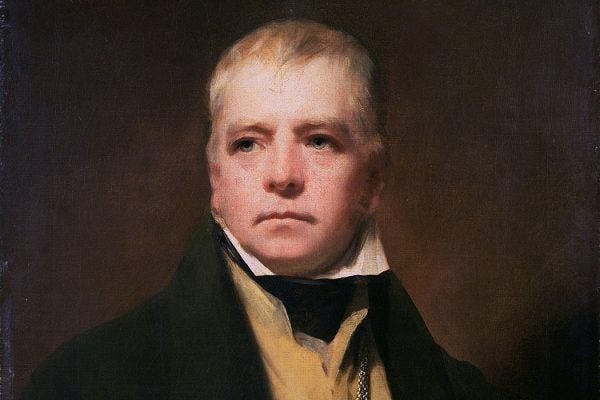 What Sir Walter Scott’s Historical Fiction Reveals About the Brexit

A scholar locates early European Unionism in the works of Sir Walter Scott. How would Scott have voted in the Brexit referendum?