Maria Sibylla Merian’s work in the natural sciences was overlooked for centuries. Now a rare butterfly has been named in her honor. 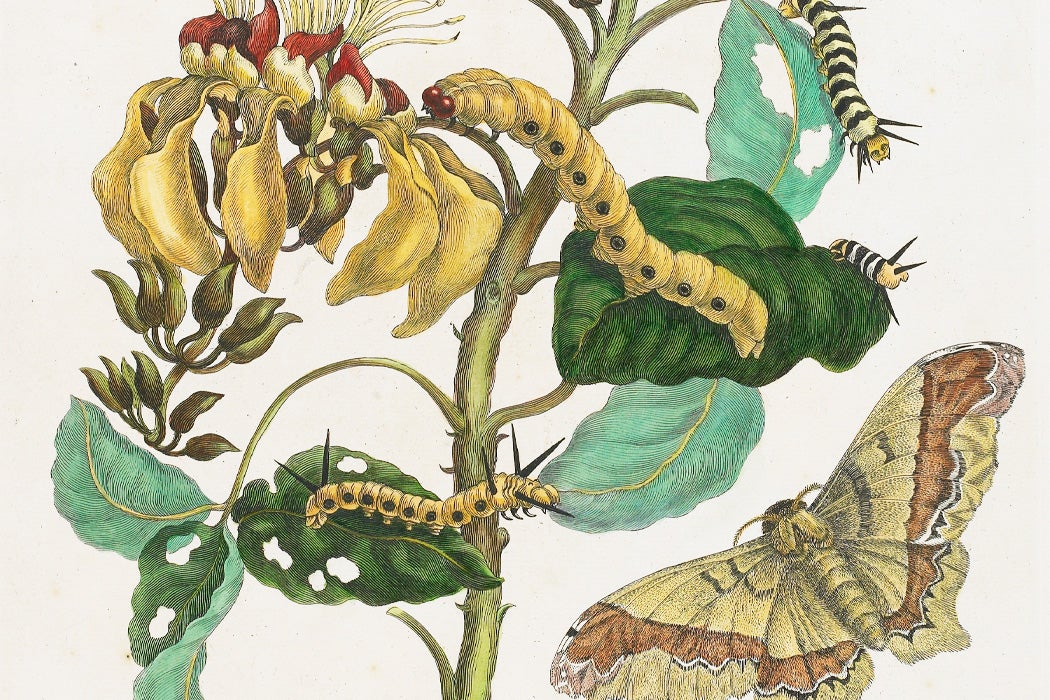 From an early age, Maria Sibylla Merian forged her own path in art and science. Born in 1647 in Frankfurt, she was the daughter of engraver Matthäus Merian, and following his death trained with her stepfather, still-life painter Jacob Marrel. It was her self-taught scholarship in the life cycles of insects, however, that set her work apart. Merian’s vivid illustrations portrayed insects in their habitats, showing the link between their lives and the plants in their environments.

This perception of their close interrelationship, almost unique when she began, had its origin in her childhood when as a girl in Frankfurt am Main she reared silkworms and watched their development from clusters of eggs to voracious caterpillars, their change into cocoons of silk and the surprising ultimate emergence of moths, with each stage wonderfully different from its predecessor.

She later married artist Johann Andreas Graff, with whom she had two daughters, and they lived a comfortable middle-class life in Nuremberg. Then in 1685, at the age of 38, Merian made the radical choice to leave her husband and move with her daughters into a Labadist religious community. “Taking advantage of the sect’s belief in absolute equality between the sexes, the artist devoted all her time to scientific study,” notes art historian Lucia Tongiorgi Tomasi in Studies in the History of Art.

At 52 years old, Merian finally had the resources and independence to set out on her own scientific expedition to Surinam.

After just a few years, she left the religious settlement, got a divorce, and relocated to Amsterdam to pursue her passions, including work on a treatise on caterpillars and butterflies. In 1699, at 52 years old, Merian finally had the resources and independence to set out on her own scientific expedition to Surinam. There in the South American Dutch colony, accompanied by her daughter Dorothea, she studied the cycles of nature. They returned to Amsterdam in 1701 with watercolors and insect, plant, and animal specimens.

“The paintings, tightly sealed in wooden boxes, and the once-living creatures, preserved in jars of brandy, would provide the basis for Merian’s greatest artistic achievement, the Metamorphosis insectorum Surinamensium, or Metamorphosis of the Insects of Surinam,” writes art historian Hannah Blumenthal in Gastronomica. “This volume of sixty engraved prints documenting the life cycles of Surinamese insects, each one shown on the plant on which it fed, was published in Amsterdam in 1705.”

Much about this publication was revolutionary. In a single illustration, Merian portrayed the whole life of an insect, emphasizing its natural environment at a time when biological study often took place in laboratories and focused on dissection. While her work was recognized by leading scientists of the day, such as naturalist Carl Linnaeus, by the nineteenth century, her reputation started to erode.

In Eighteenth-Century Studies, historian Sharon Valiant observes that one reason for this slide was that each of the five editions of Surinam was issued in a painted and unpainted version, with the unpainted books sometimes colored inaccurately by later hands. Furthermore, the relentless scrutiny of errors in Surinam often seemed to be a personal attack on Merian as a woman who acknowledged her debt to the non-white people of Surinam who helped her studies. “It is of special interest that this controversy took place in the era when natural history was becoming an academic discipline,” Valiant states. “The nineteenth century chose to change the history of science rather than to acknowledge the work of a woman, particularly a woman who credited Africans and native Indians who helped her.”

Finally, in the later half of the twentieth century, Merian rebounded. Several new publications revisited her legacy, and in 1992 she was commemorated on the 500 DM note in Germany. Just this month, a new Central American butterfly species was named in her honor. Catasticta sibyllae is a stunning black butterfly with rows of white dots lining its wings and bits of red where they meet the body. Examples have only been identified twice, one in a drawer at the Smithsonian National Museum of Natural History where it’s been stored since 1981, and the other collected this May in Panama. As Shinichi Nakahara, lead author on its study and a lepidopterist at the Florida Museum of Natural History, stated: “Since this is such a distinctive butterfly, we wanted to name it after someone who would deserve it.”