Astronomers who noticed a slight blip in space’s background radiation got an insight not just into the early stars but into the age and nature of the early universe. 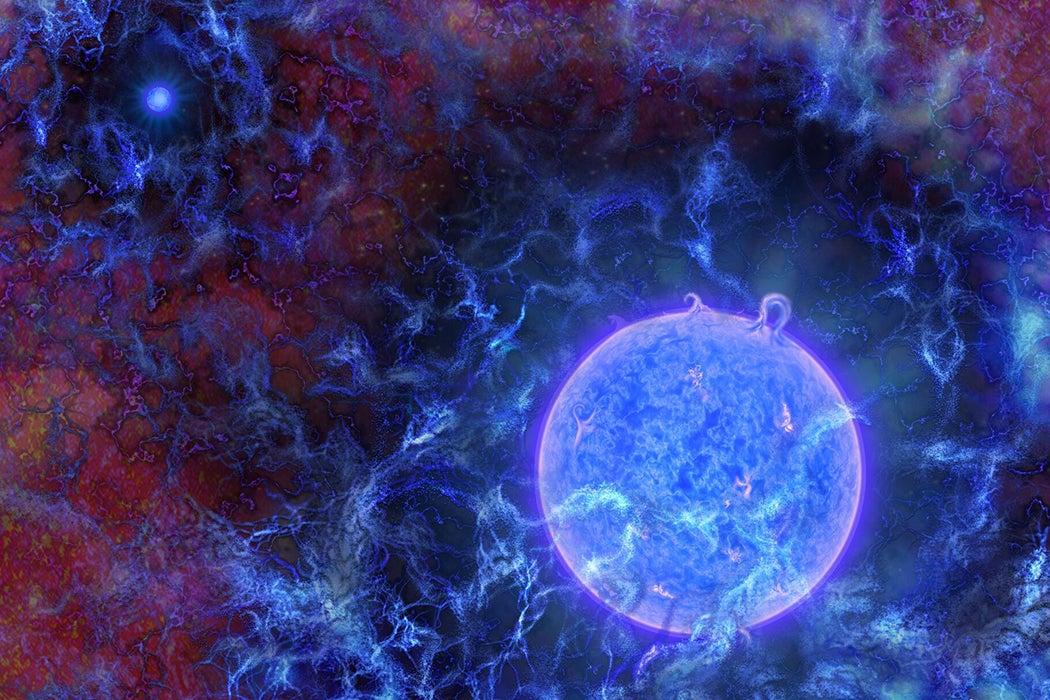 Astronomers examining a slight blip in background radiation left over from the Big Bang have caught a glimpse of the earliest stars observed to date; stars that started shining only about 180 million years after the universe began. For decades, astronomers have been seeking, and finding, early stars, peering further and further back in time. These glimpses provide insight not just into the early stars but into the age and nature of the early universe. After all, when you look at a star, you are looking back in time. You see the star not as it is, but as it was when the light you see first left the star.

Generally, as astronomer Max Pettini points out in his article “The First Stars: Clues from Quasar Absorption Systems,” the earliest stars are the most distant stars. Just after the universe first exploded into being, it expanded rapidly outwards, and everything in the universe is constantly moving apart to this day (at an increasing rate). It’s not a perfect analogy, but think of a balloon with two dots right next to each other. As the balloon inflates, the dots will be farther and farther apart. So the most distant space is the earliest, since the light reaching us had to have left so long ago that the universe was relatively young.

Examination of the earliest observable galaxies has revealed that the early universe was not terribly complex.

The rate of universal expansion is sometimes calculated by measuring the distance to these most distant stars. As scientist Andrew Watson writes for Science, astronomers were embarrassed after calculating from the expansion rate that the oldest (not earliest) stars were older than the calculated age of the universe. Clearly, somebody had calculated something wrong. Fortunately, more precise observations soon rectified the error, placing the age of the universe at about 13.7 billion years old, much older than the oldest stars (~8 billion years old).

Until this most recent discovery, the earliest observable galaxies were from about 600 million years post big-bang. Examination of these objects has revealed that the toddler universe was not terribly complex. Only light elements such as hydrogen, helium, and a teensy bit of lithium were present, as well as dark matter. These elements would have been conducive mostly to forming super massive stars, so all the earliest stars were large, instead of the range of sizes observed today. The huge stars were very hot and short-lived. Heavier elements were created in these huge stars and then distributed throughout the early universe when these stars expanded. These elements were used by the second generation of stars to make even heavier elements, eventually leading to the elements available today.

All of these observations are by necessity fairly indirect. It’s amazing that remnants from the very beginnings of existence are still around, let alone detectable. Of course, the very beginning, the Big Bang itself, remains mysterious. But astronomers continue to probe farther and farther back, getting closer to the very beginning.