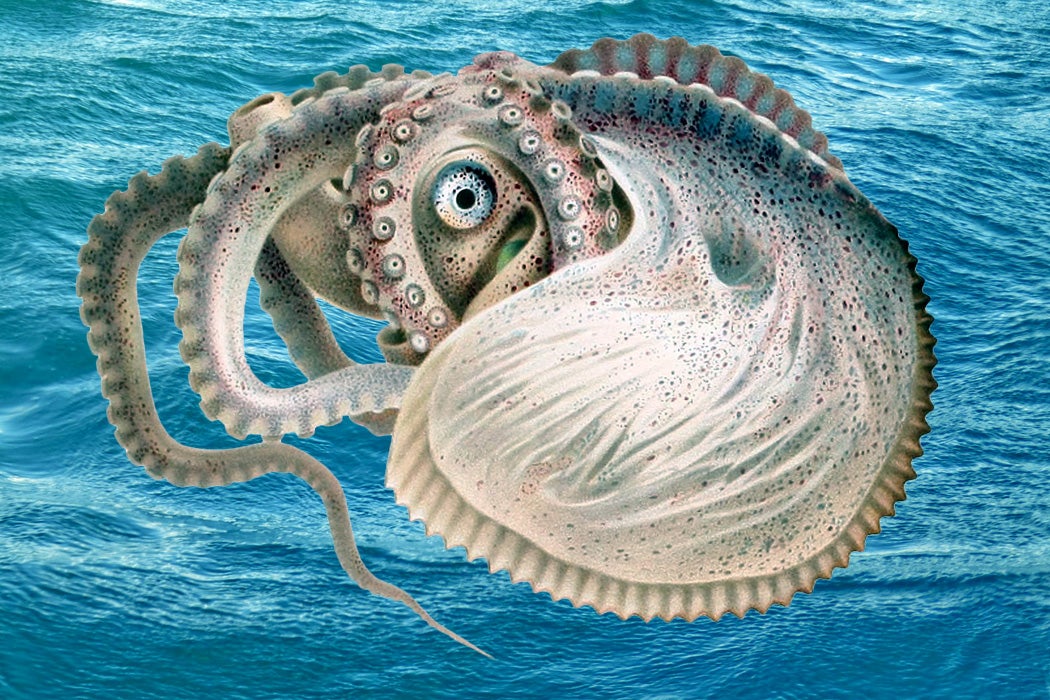 Walking along a shore facing the open ocean, a beachcomber may make an extraordinary find: a paper-thin spiral shell, anywhere from two to around ten inches across, intricately patterned with ridges. These aren’t snail shells. They’re the egg cases of the paper nautilus, the world’s only seafaring octopus.

Paper nautilus is actually the name for the shell of female Argonautidae. This family of small octopuses lives in the pelagic (open ocean) zone rather than near the seafloor like most octopuses. They are unrelated to the better-known chambered nautilus.

As discussed by zoologists Julian Finn and Mark Norman in Proceedings, the function of the paper nautilus shells has puzzled naturalists all the way back to Aristotle. It is now known that, unlike most octopuses, female argonauts do not lay their eggs in a hole. Rather, they use the shell as a mobile breeding chamber, and may breed several times in their lifetime.

Finn and Norman also determined that the shell has another function benefitting the pelagic lifestyle—it helps the female argonaut maintain buoyancy. At the surface, the argonaut sucks air into her shell. When she reachers her desired depth, she uses two modified tentacles that spread out like paddles to seal off the interior of the shell, trapping the air. The trapped air allows her to maintain neutral buoyancy and swim more efficiently.

Argonauts are unusual among octopuses in that they exhibit extreme sexual dimorphism.

Argonauts are also unusual among octopuses in that they exhibit extreme sexual dimorphism; females are gigantic compared to males, up to 600 times larger in some species. In 1827, Italian physician Stefano Della Chiaje found what he thought was a parasitic worm attached to the body of a female Argonaut. He named this “new species” Hectocotylus octopodus. The discovery fueled the mistaken belief that male Argonauts were parasites. Della Chiaje’s “worm” was actually the male reproductive organ of the cephalopod, an arm modified as a sperm delivery system. Named the hectocotylus in Della Chiaje’s honor, the arm either breaks off on a female or, in a stroke of evolutionary brilliance/nightmare fuel, in some species the arm lives autonomously by itself until a female is encountered.

As they roam the open seas, female argonauts feed on a variety of invertebrates, giving rise to a fascinating interspecies relationship. Writing in MEPS, researchers Thomas Heeger, Uwe Piatkowski, and Heino Möller observed an argonaut with its face partially inside a jellyfish that was secured near the shell mouth with the octopus’s arms. Heeger et al. suggest that such arrangements may provide camouflage, defense, or most incredible, the argonaut might have been feeding directly on food captured by the jellyfish. Juvenile argonauts have also been observed to associate with salps, drifting tunicates that form long chains.

These remarkable creatures are a monument to the beauty and diversity of nature. Unfortunately, given their thin shells, argonauts are especially vulnerable to ocean acidification, which is on the rise.