As chronicled by Chinese poet Yu Jianwu, the use of fire and smoke for time measurement dates back to at least the sixth century CE. 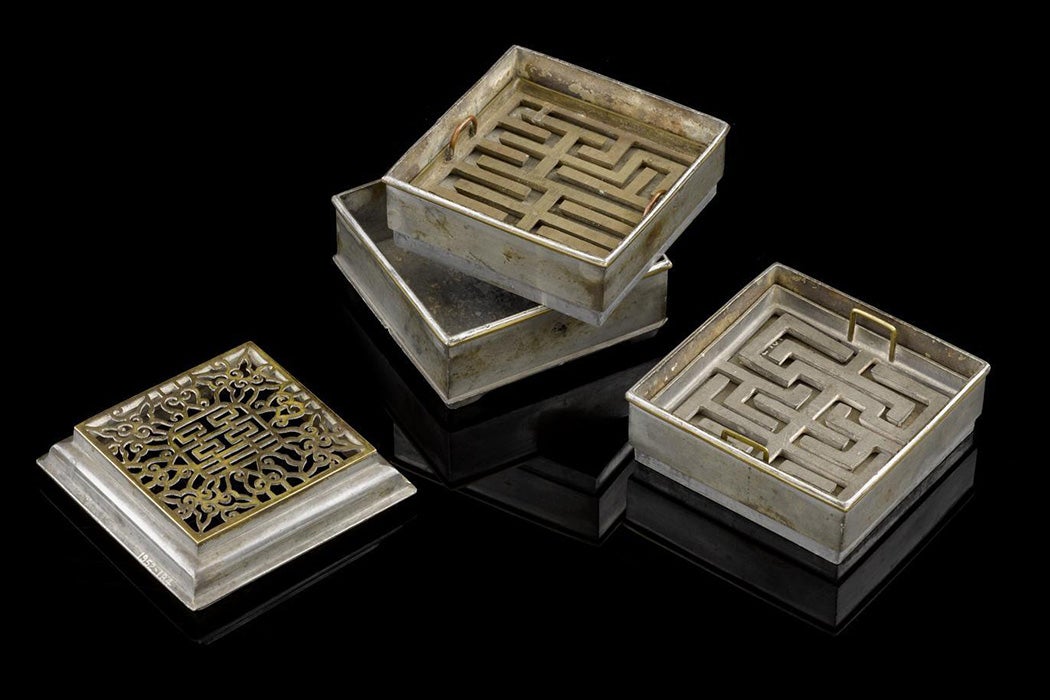 Chinese incense clock that measures time by burning powdered incense along a pre-measured path, with each stencil representing a different amount of time
via JSTOR
By: Amelia Soth
5 minutes
Share Tweet Email Print

How do you know what time it is? Throughout history, we’ve traced the hours with shadows, sand, water, springs and wheels, and oscillating crystals. We’ve even planted clock-gardens full of blossoms that open and close at each hour of the day. Anything that moves with regularity, really, can become a timepiece. But I only know of one kind of timekeeper that was driven by fire: the incense clock.

The incense clock takes the form of a maze of incense, with a tiny ember slowly burning through it. Early in the Qing dynasty (1644–1911), incense clocks burned all night in Beijing’s tall drum tower, measuring out the time until the beating of the huge drum announced the end of the night watch.

According to historian Andrew B. Liu, incense had been used to measure time since at least the sixth century, when the poet Yu Jianwu wrote:

By burning incense [we] know the o’clock of the night,
With graduated candle [we] confirm the tally of the watch.

The incense clock takes the basic concept—timing by combustion—and elevates it to a new level of gorgeous complexity. Examining the example held by the Science Museum, I was struck by its diminutive size: no larger than a coffee mug. Yet its small compartments are carefully packed with everything it needs to operate. In the bottom tray, you’ll find a bite-sized shovel and damper; above that, a pan of wood ashes for laying out the incense trail; then, stacked on top, an array of stencils for laying out the labyrinths. As Silvio Bedini, historian of scientific instruments, explains in his extensive study of the use of fire and incense for time measurement in China and Japan, the variety allows for seasonal variation: longer paths to be burned through the endless winter nights, while shorter ones serve for summer.

Some users may have used different kinds of incense at different parts of the path, or inserted scented chips along the way, so that they could tell the time with just a sniff.

To set the clock, start by smoothing the ashes with the damper until they are perfectly flat. Select your stencil, then use the sharp edge of the shovel to carve out a groove, following the pattern, and fill it with incense. Finally, cap it with the lacy lid to vent the smoke and control the flow of oxygen.

To track smaller intervals of time, place small markers at regular points along the path. Some versions had little chimneys dispersed across the lid, allowing the hour to be read based on which hole the smoke was venting through. And some users may have used different kinds of incense at different parts of the path, or inserted scented chips along the way, so that they could tell the time with just a sniff.

But just in case the scent of sandalwood wasn’t enough of an alert, people also contrived to create incense-based alarm clocks. A dragon-shaped fire clock offers a particularly beautiful example. The dragon’s elongated body formed an incense trough, across which stretched a series of threads. Small metal balls were attached to opposite ends of the threads. Dangling below the dragon’s belly, their weight held the threads taut. As the incense burned down, the heat broke the threads, freeing the balls to clink into a pan below and sound an alarm.

Bedini offers a description of incense clocks written by Father Gabriel de Magalhaen, a Jesuit missionary to China in the mid-1660s. De Magalhaen reported that he himself had made several clocks for the Chinese emperor, and he had observed the construction of many more, including a much more pedestrian version of the fire-clock concept, based around a spiral of hardened incense paste:

They are suspended from the center and they are lighted at the bottom end, from which the smoke issued slowly and faintly, following all the turns which has been given to this coil of powdered wood, on which there are ordinarily five marks to distinguish the five parts of the evening or night. This method of measuring time is so accurate and certain that no one has ever noted a considerable error. The literate, the travellers, and all those who wish to arise at a precise hour for some affair, suspend at the mark which they wish to arise at, a small weight which, when the fire has arrived at this spot, invariably falls into a basin of brass which has been placed below it, and which awakens the sleeper by the noise which it makes in falling. This invention takes the place of our alarm clocks, with the difference that they are very simple and extremely inexpensive…

By the 1600s, mechanical clocks were available, but only for the very wealthy; timing by incense was cheap, accessible, and, as the passage notes, perfectly functional. Hence, no doubt, its surprising persistence: well into the twentieth century, writes Liu, coal miners continued to use the glow of incense to track the time they spent underground, while tea-roasters used them to approximate the time it took to toast batches of tea.

Incense and Industry: Labour and Capital in the Tea Districts of Huizhou, China
By: Andrew B. Liu
Past & Present, No. 230 (February 2016), pp. 161–195
Oxford University Press on behalf of The Past and Present Society
The Scent of Time. A Study of the Use of Fire and Incense for Time Measurement in Oriental Countries
By: Silvio A. Bedini
Transactions of the American Philosophical Society, Vol. 53, No. 5 (1963), pp. 1–51
American Philosophical Society