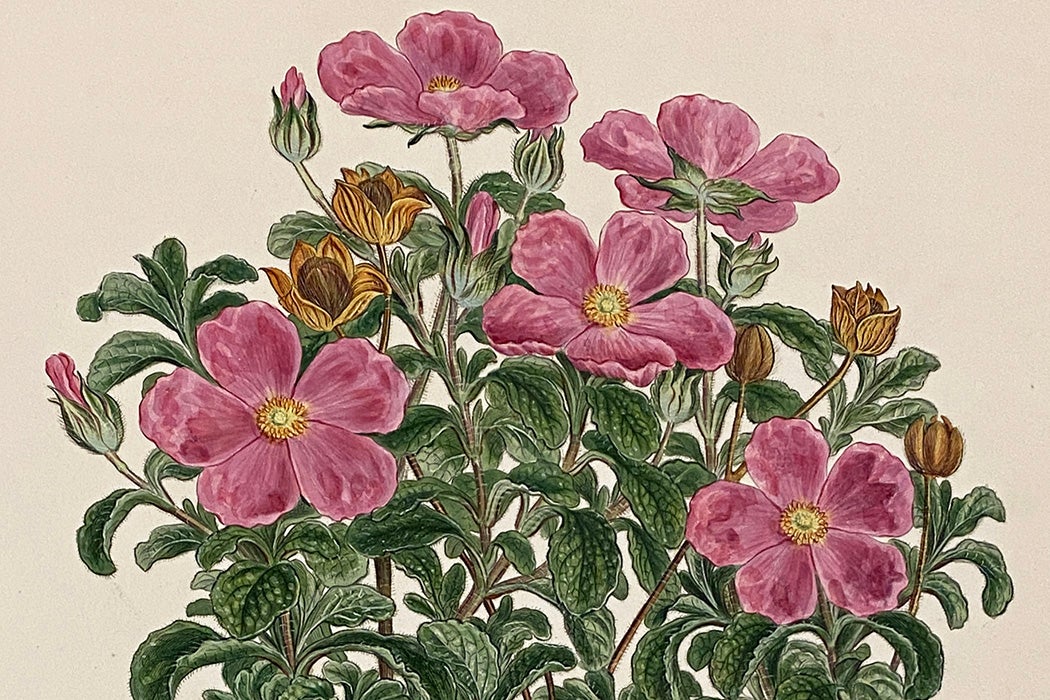 We are more than two years into a global pandemic that has claimed at least five and a half million lives, if not double or quadruple that. The staggering toll has reminded us that pathogens can upend our everyday lives and cause immense suffering. While COVID-19 has monopolized headlines, more than 700,000 people across the globe die annually of antimicrobial-resistant infections, ones that do not respond to our current arsenal of antibiotics. The number of these types of infections is projected to reach 10 million by 2050. While penicillin was a gamechanger in 1929, when it was discovered, no new classes of antibiotics have been brought to market since the 1980s.

The increasing challenge of drug resistance has fueled scientific interest in active phytochemicals (chemical compounds produced by plants) with therapeutic functions. Before the advent of synthetic pharmaceuticals in the late 1800s, most medicines were derived from plants, animals and minerals. Ethnobotanist Cassandra Leah Quave has noted in her book The Plant Hunter: A Scientist’s Quest for Nature’s Next Medicines that of the estimated 374,000 species of plants on earth, we have information for the medicinal use of at least 33,443. Not only has so much traditional knowledge about the medicinal virtues of plants been lost or ignored, but we are also unaware of the potential medicinal value of more than 90 percent of the plants known to us, let alone species not yet discovered. How can these valuable plants that will furnish us with new—or forgotten—cures be identified?

Ethnopharmacology is the scientific study of botanical and other remedies traditionally used by human communities, to discover or redeploy plant compounds for the development of new medicines. The Mediterranean region boasts a rich history of medicinal traditions, recorded in both textual and oral sources, and is therefore fertile ground for such inquiry. Within the broader region, a particular hotspot of biodiversity is the island of Crete, celebrated since antiquity for the rarity and potency of its medicinal plants. A species endemic to the island, Cistus creticus, is drawing fresh attention, but the plant’s history has been entangled with humans for three millennia.

Crete became a locus of pilgrimage for European naturalists seeking to witness with their own eyes the botanical riches recorded in the ancient sources.

Cistus creticus, or the Cretan rockrose, is a hardy shrub that grows in poor soils and harsh conditions. Glandular hairs on the surface of the leaves exude a resin, labdanum or ladanum (not to be confused with laudanum, an opiate) that contains more than 300 chemical compounds, with unique aromatic and medicinal properties. The two fascinating methods of harvesting labdanum in the southeastern Mediterranean were documented as early as 2500 years ago by the Greek historian Herodotus. The more unusual source was goat beards, where the resin coagulated while the animals grazed. A specimen of goat’s hair with labdanum attached is in the Economic Botany Collection at the Royal Botanic Gardens at Kew. The other method was by means of a bow-shaped instrument with straps—called ladanisterion—that was combed through the bushes to collect the resin, which was then scraped off and formed into lumps. Villagers in northern Crete today still rely on this tool to harvest labdanum.

The resin has been used since Biblical times as incense, in perfumes and cosmetics, and as a salve for many diseases. The Greek writer Dioscorides, whose De materia medica (written between about 50-70 CE) was the most important pharmacological work in Europe and Middle East for the next sixteen centuries, described labdanum’s medicinal use as a diuretic, a remedy against earache, for expelling afterbirth, treating tumors in the womb, and as a pain-reliever, cough medicine and warm compress. In the medieval period, we encounter labdanum in Byzantium, Italy, and northwest Europe “as an ingredient of medical preparations and perfumes.”

In later centuries, Crete became a locus of pilgrimage for European naturalists seeking to witness with their own eyes the botanical riches recorded in the ancient sources. Their accounts refer time and again to the wondrous Cretan rockrose. Pierre Belon visited Crete, then a Venetian colony, in 1548 and described the laborious resin collection under the hot sun. Bernard Randolph, in his 1687 The Present State of the Islands in the Archipelago, wrote of a drug called by the Venetians “oldani” that was bought by them and sent to Venice. The French botanist Joseph Pitton de Tournefort was accused of spying by the Turkish authorities for trying to observe the harvest of the precious substance during his 1700 visit to the island. He nevertheless succeeded, and his description in turn guided the footsteps of English botanist Robert Sibthorp a few decades later. Sibthorp’s Flora Graeca (1806-1840), held in the Dumbarton Oaks rare book collection, includes a magnificent hand-colored image of the plant’s ruffled beauty.

The Cretan rockrose seems to have faded into obscurity in Europe as a medicinal plant in the eighteenth and nineteenth centuries, following the Ottoman conquest of Crete in the late seventeenth century, but continued to be valued on its native island. The plant’s long entanglement with local communities is preserved in online documentaries, oral histories, and school projects. Past and present are woven together in the enduring use of labdanum in home remedies for children’s colds and tummy aches, as a culinary ingredient, as protection from the “evil eye,” and as one of dozens of herbal and medicinal compounds used in the preparation of the holy chrism for baptisms and the sanctification of new churches. In these living traditions, the accrued ritual, spiritual, and healing significance of the plant is perpetuated.

The millennia-old medicinal lore surrounding the healing properties of Cistus creticus is now attracting renewed attention as science turns to traditional knowledge and uses of plants to discover effective compounds again disease. A recent scientific paper from Germany concluded that “the application of C. creticus preparations by Lyme disease self-help groups may be considered as a reasonable therapy approach.” A 2020 article in Journal of Ethnopharmacology describes direct in vitro antiviral activity of Cistus creticus against dengue fever, and a 2021 review of Cistus species used in traditional Mediterranean medicine summarizes the evidence of their antibacterial, antifungal, antiviral and anti-inflammatory properties.

The plant’s iconic status in cultural histories of the region has guaranteed the survival of associated lore, and is fueling new studies by both Greek and international researchers. But the traditional labdanum harvest has dwindled to one or two Cretan villages. The uses and histories of so many other plants are obscure and in danger of being lost. Ethnographer and archaeologist of the Aegean archipelago Harriet Blitzer has undertaken fieldwork and conducted oral histories in the region since the 1970s; her microhistory of the Messara plain in Crete identifies more than 140 wild plants used regularly in the domestic sphere, many as medicines and disinfectants. During those decades she has witnessed the loss of local knowledge following World War II with the advent of mechanized agriculture, pesticides and artificial irrigation, and the flight of young people from the countryside.

At a global scale habitat loss, pollution, and climate change threaten two in every five plants with extinction. Ethnopharmacology is in a race against time to identify the unknown or forgotten life-saving properties of plants due to both the loss of local traditions and declining biodiversity. The Plant Humanities Initiative at Dumbarton Oaks researches and narrates these urgent questions to convey the extraordinary significance of plants to humans and the earth’s life systems.

The historical use of ladanum. Palynological evidence from 15th and 16th century cesspits in northern Belgium
By: Koen Deforce
Vegetation History and Archaeobotany, Vol. 15, No. 2 (March, 2006), pp. 145-148
Springer
Cycles of Social Complexity in the Mesara Region of Crete
By: L. Vance Watrous
The Plain of Phaistos
Cotsen Institute of Archaeology Press at UCLA