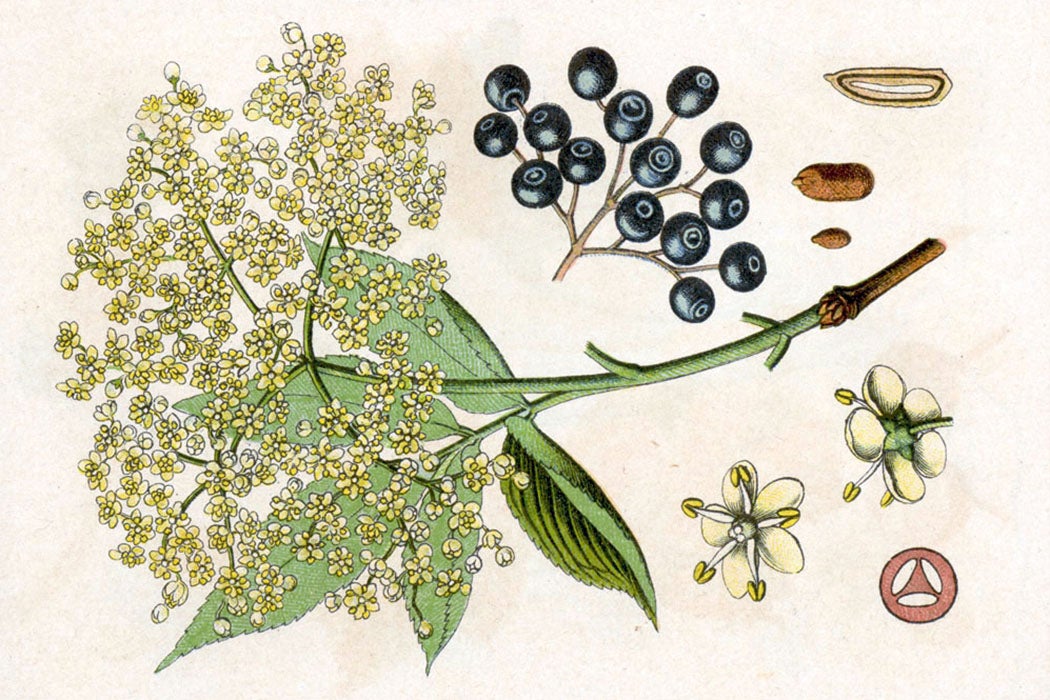 In 2020, herbal remedies had a bumper year. As one market report noted, it was the first year herbal supplement sales in the United States surpassed $10 billion. And, one supplement stands out as a leader in this endeavor: black elderberry. Since the winter of 2018, when a particularly harsh flu season led to shortages of the antiviral drug Tamiflu around the country, elderberry sales have climbed the ranks to become the “top-selling herbal dietary supplement ingredient in mainstream retail outlets,” according to the market report. In 2020 alone, consumers in the US spent over $270 million on elderberry supplements.

On the one hand, the rise of elderberry in 2020 might seem like a no-brainer: with the advent of COVID-19, and initial gaps in knowledge of potential treatment and prevention, populations worldwide have increasingly turned to natural remedies to bolster their immune systems. But, on the other hand, the immense popularity of elderberry also speaks to a broader trend of western science seeking to avail itself of Indigenous knowledge.

Hippocrates referred to the elder plant as his “medicine chest” in 400 BC for its breadth of applications.

Elderberries grow on the elder shrub, which is native to both Europe (species Sambucus nigra, most commonly) and North America (Sambucus canadensis). The shrub grows in open, wooded areas, often along streams or rivers as well as sites as commonplace as the side of a road and in backyards. It’s a hardy, adaptable plant, as described by the US Forest Service, found in nearly all of the continental United States, with woody stems and branches that can reach eight feet tall in North America, with lacy white elderflowers in the spring.

The history of humankind’s fondness for Sambucus is long. Hippocrates referred to the elder plant as his “medicine chest” in 400 BC for its breadth of applications. His observation has echoed through the centuries across European and Indigenous American healing traditions. One English reference text, The family herbal, first published in 1754 and held by Dumbarton Oaks Library, remarks that the “inner bark” of the elder served as a “strong purge…known to cure dropsies [a term thought to refer to edema or congestive heart failure] when taken in time.” According to this text, elderflowers could be boiled in lard to produce a cooling ointment, while the berries could be used to make wine or “boiled down with a little sugar” to produce “the famous rob of elder, good in colds and sore throats.”

S. canadensis would have been easily recognized by European colonizers in North America, since it presents as a shorter cousin of S. nigra. One 1898 guide on medicinal plants published in Cincinnati titled the King’s American dispensatory describes S. canadensis as a “common, well-known plant,” suggesting its widespread use in nineteenth-century America.

In contrast to The family herbal, elderberry’s utility to medical practice in the King’s American dispensatory is expressed in terms of its chemical makeup rather than through clinical observation or cultural tradition. As it notes, elder is a “purgative” force useful in reducing swelling by encouraging secretion from fluid-filled tissues as well as in “febrile diseases,” including scarlet fever due to its “diuretic properties” and its levels of “malic acid, citric acid, resin, fat, sugar, gum, and tannin.”

This dedication to uncovering elderberry’s chemical mechanisms hints at the rising authority of biomedical knowledge and research in western medical practice at the turn of the 20th century. Breaking down elderberry into its constituent pharmacological pieces illustrates a shift in the culture of western medicine that facilitated the separation of “traditional” and “conventional” medicine.

In the late 19th and early 20th centuries, with the emergence of laboratory science and the professionalization of medicine in Europe and the United States, allopathic physicians sought to distance themselves from traditional herbalist practices, claiming authority over knowledge of sickness and health that could be “ostensibly independent of cultural restraints or meaning.” Ingredients like elderberry, and especially the healers who utilized them, were thus exiled from the official canon of “scientific medicine” and relegated to the “complementary” or “alternative” sphere. Abraham Flexner, the American educator and author of the 1910 Flexner Report that “transformed the nature and process of medical education in America”, scornfully dismissed homeopaths, including herbalists, as “drugless healers” who were at best members of pseudo-medical “sects” and at worst “unconscionable quacks” with “fatally defective” medical knowledge.

And yet even as natural remedies like elderberry found themselves on the margin of mainstream scientific practices in the US, they never went out of vogue in some communities. “Elderberry is one of our most important traditional medicines and we’ve never stopped using it,” Sage LaPena, a Nomtipom and Tunai Wintu ethnobotanist and medical herbalist, explained in an interview with the University of California. Elderberries and elderflowers have long been used by Indigenous healers for treating fevers and swelling and to induce sweating. The berries, which feature prominently in some Indigenous folklore, are also often dried and stored for the winter for later consumption.

The recent entrance of elderberry into mainstream popularity and market success is marked not only by an increasing popular desire to engage with traditional, “natural” remedies but also the impact of scientific “confirmation” of elderberry’s advantageous bioactive components and potential for drug development.

Published, peer-reviewed scientific studies and clinical trials focused on elderberries have greatly increased in number since the late 1990s. These studies have elucidated varying biomedical explanations for elderberry’s ability to modulate the activity of our immune systems and combat viruses like influenza-A. Elderberry’s utility as a “purgative,” as described in the King’s American dispensatory, and for fevers or inducing sweating, as in LaPena’s practice, have been attributed to flavonoid compounds that stimulate the release of pro-inflammatory cytokines in the body, small proteins critical to our innate immune response that encourage the migration of immune cells to infection sites. Regarding elderberry’s efficacy in alleviating viral cold and flu symptoms, other research has shown that elderberry can neutralize distinctive glycoproteins found on the surface of viruses like influenza, inhibiting the ability of the virus to enter human cells and replicate.

Many scientific studies of elderberry gesture, in vague terms, to the berry’s “well known” efficacy and “extensive use as a natural remedy.” Usually located in the introductory paragraph, such statements assert the authority of these studies to then either confirm or deny long-standing traditional knowledge and practice.

And, beyond seeking to ascribe scientific legitimacy to elderberry’s abilities, some studies also seek to direct future research, production, and use of the plant as well as pharmaceutical abstractions of its bioactive compounds: one confirmatory study of elderberry’s antiviral properties claimed to “validate the requirement” of increased research into “new industrial applications” for the plant. Elderberry’s potential to give rise to a “new class of antivirals” has also been discussed. These future-facing conclusions illustrate the ways elderberry has become a focus of bioprospecting, or the harnessing of plant-based sources to develop new pharmaceutical products.

Bioprospecting draws upon discourses of scientific “legitimacy” in order to translate “traditional” or “natural” beliefs into commodities. This “codification of nature as reservoir of capital values” holds significant implications for Indigenous knowledge and practices. For example, the recent revival of elderberry as the new “ultimate cash crop” has, LaPena notes, created barriers “to attaining abundant elderberry supply” due to the “loss of land access, loss of harvesting rights, vegetation removal for land development, and federal endangered-species regulations.” These barriers underscore the ways bioprospecting can function as a “hegemonic discourse that appropriates nature, indigenous people, and their knowledge.”

Through the history of elderberry, we can map the complex historical roots of recent trends favoring herbal and natural remedies, which have proven themselves resilient members of our medical chests amidst evolving perceptions of authority in healing. The Plant Humanities Initiative at Dumbarton Oaks investigates changing understandings of the healing properties of plants in historical context, as well as dynamic relationships between plants and scientific knowledge.

Editor’s Note: This article has been edited to correct a date.