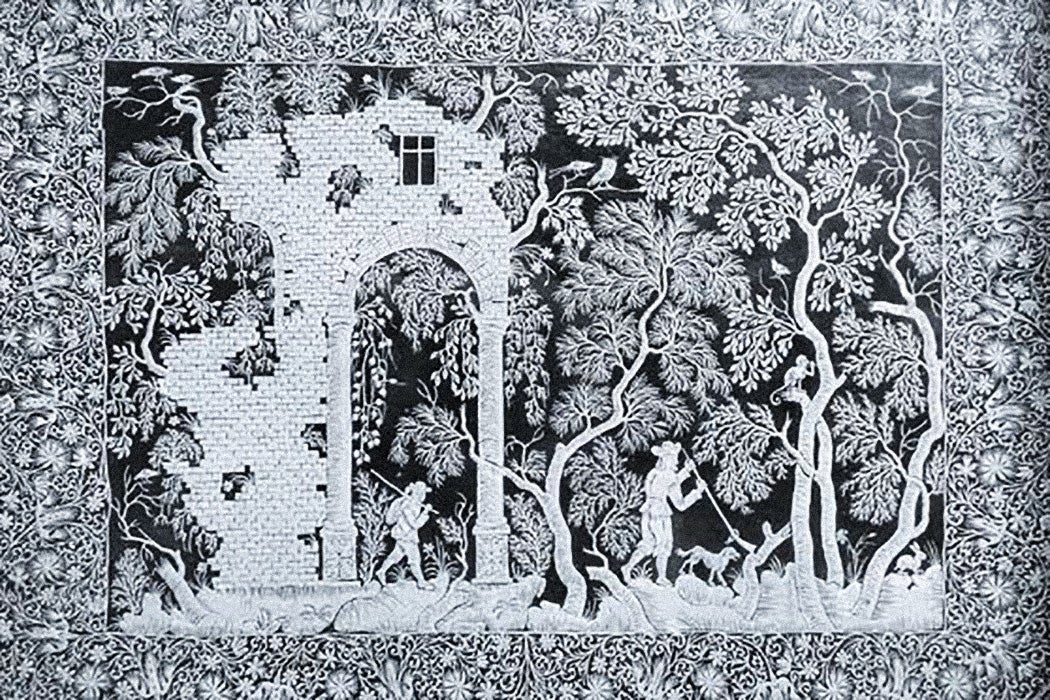 This scene was carved out of a single sheet of paper, snip by snip. Look at the delicacy of the tree branches and the hanging vines, clipped spiderweb-thin. Even the tree trunks are not solid: the illusion of shading is produced by hundreds of tiny horizontal cuts. Likewise, the peasants’ clothes, the birds’ wings, and the turf on the ground are picked out with incisions so meltingly subtle that they seem to shade into subtle hues of gray beyond the capacity of the plain paper.

This artwork was a product of the Renaissance-era Netherlands, close kin with the work of Rembrandt and Vermeer. And in her day, the artist who huddled over this sheet, meticulously clipping out the negative space, was every bit as famous as those icons. Her name was Joanna Koerten, but her skill with the scissors earned her the epithet “Scissors-Minerva,” after the Roman goddess of art.

In a way, it was the medium she commanded so expertly—cut paper—that doomed her.

“The Blok,” the museum she ran out of her house, was described by the art historian Martha Moffitt Peacock, writing in the Netherlands Yearbook for History of Art, as an “eighth wonder of the world.” Tsar Peter the Great, Cosimi de Medici, and innumerable poets and fellow artists visited there to watch her make her careful incisions. At one point, one of her diminutive paper-cuttings sold for more than Rembrandt’s monumental Night Watch. After her death, her husband published a book of poems in praise of her work; in time, the collection swelled to fill six volumes.

And yet, in the centuries that followed, her name was more or less written out of art history. In a way, it was the medium she commanded so expertly—cut paper—that doomed her. Seen as amateur, dilettantish, more “artsy” than “high art,” papercut art was relegated to the realm of mere curiosities, a footnote in art history, and Joanna Koerten with it.

Oil painting, along with sculpture, was seen as the true medium of “high art.” Anything else smacked of kitsch or handicraft. Yet the professional world of oil painting, with its strict, exclusionary guild regulations, was prohibitively difficult for women to enter. There were a few notable exceptions. Judith Leyster made her living painting in oils, was enrolled in the guild, and even took on apprentices. But even Leyster’s fame did not outlive her: after her death, most of her paintings were falsely attributed to her husband.

But when you look beyond the prestige medium of oil painting, the picture changes. Like readjusting a lens, suddenly, a huge outpouring of work by female artists comes into focus. To name just a few: Anna Roemers Visscher, who etched glass with a diamond pen; Anna Maria van Schurman, who sculpted in wax; Juffrouw Rozee, who invented a method of painting that so astonished her contemporaries that some considered it “sorcery.”

As Elizabeth Alice Honig argues in “The Art of Being ‘Artistic:’ Dutch Women’s Creative Practices in the 17th Century,” most female artists operated in a gray area between the professional world of the workshop and the amateur world of home handicraft, playing on the values of both spheres. As Honig writes:

The economics of artistic commerce are masked by the rituals of courtly visits, exchanges of compliments and of costly gifts, the writing of effusive and elegant poems of praise. We are thus… in an indeterminate zone between amateurism and professionalism: profit occurs, but is constructed as merely a by-product of inborn talent and the love of art.

It was in the canny negotiation between social constrictions that female artists carved out an unusual niche.

Koerten was perhaps the canniest of all. As Peacock argues, as Koerten’s style matured, she developed a distinctive artistic idiom that allowed her work to be classed with the “high art” of sculpture.

Consider this portrait of “Roman Liberty.” It exchanges the airy delicacy and snowflake silhouettes of her lacier work in favor of a bold sculptural exploration of depth, light, and shadow. White paper stands in for white marble; the pair of scissors for the sculptor’s chisels. As one poet wrote:

When Michelangelo and Apelles wanted to make a painting. They made use of paint.But J. Koerten makes a blow with the chisel. In cutting paper, she paints everything according to nature.

There she is, in the same breath with Michelangelo. Yet the monumentality was deceptive. From a historiographic standpoint, the compromise Koerten struck proved as flimsy and ephemeral as finely-cut paper.