During the Napoleonic Wars, Irish women, who had traditionally only spun flax into thread, took over the traditionally male job of weaving linen as well. 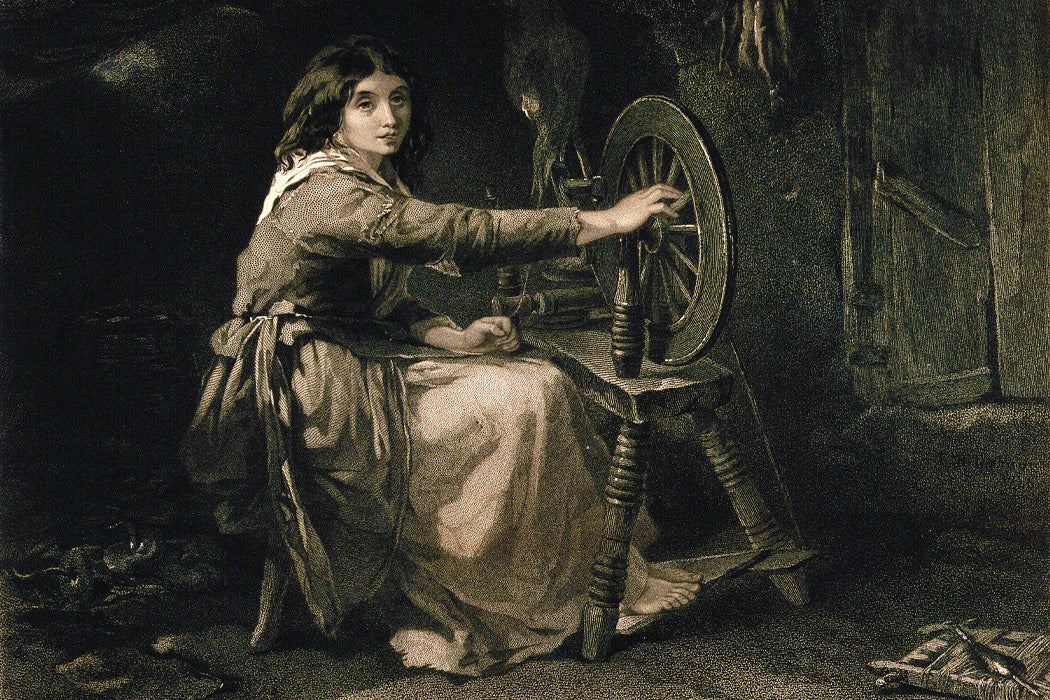 You probably know “Rosie the Riveter.” She’s the iconic incarnation of the women in the industrial workforce of World War II. With manpower siphoned off to war, womanpower was called upon to work in factories in the kinds of jobs few women had seen before.

But WWII was not the first time a deficit of male laborers opened doors traditionally closed to women. War can be a radical force, a great over-turner of traditions like sexual divisions in labor. As Anne McKernan tells us, something similar happened during the Napoleonic Wars, particularly in the linen industry in Ulster.

Linen merchants turned to women to maintain and increase production.

From 1803 to 1815, the United Kingdom of Great Britain and Ireland was at war with France. With 300,000 men in the army and another 140,000 in the Royal Navy, manpower was absent from the homefront, just as demand for everything from food to clothing rose. War devoured textiles like linen, which was used for canvas, duck, and sailcloth. Linen merchants turned to women to maintain and increase production.

The province of Ulster is now spilt between the Republic of Ireland and Northern Ireland. Before 1800, Ulster had a strong tradition of linen production by farmers who spun and wove the flax they themselves grew. (Irish linens are still famous.) The women of farming families spun flax fibers on spinning wheels, while the men wove the resulting thread into linen cloth on their own looms.

[War] presented Irish entrepreneurs with a golden opportunity to snap the link between gender and commercial linen weaving; snapping that link, in turn, prepared the way for snapping the link between farming and weaving, the bi-occupations of rural Ulster households. War-time innovations in the linen industry subsequently turned independent farmer-weavers into rural proletarian weavers.

Mechanization began to replace hand-spinning through the first decade of the nineteenth century. But spinsters (only later did the word come to mean unmarried women) could earn three times as much weaving. Still, the merchants of the Irish Linen Board had to overcome traditional gender divisions in this home-work system. And, to keep up production, they needed to do it fast.

The innovators believed time was of the essence. They could not wait until women found their way into the labor pool of weavers. Increased supplies of coarse yarn from mechanical spinning would create greater demand for weavers at a time when the labor supply was contracting in the face of increasing demand from the agricultural sector.

McKernan reveals how the Irish Linen Board recruited female weavers. For one thing, there were the higher wages. But there were also incentives: cash prizes for the first 200 yards and premiums for cloth with higher thread counts. The newest loom technology, which could double the volume of cloth a worker could produce, was distributed for free. This wasn’t altruism: linen merchants demanded the right to inspect homes with the new looms, which were no longer the workers’ possessions. “If the inspector found ‘obstinacy in attention or idleness be preserved in,’ he had discretion to ‘remove the loom.'”

Nevertheless, “young women responded enthusiastically to weaving.” From 1806-1809, over 1,800 free looms were distributed. One six-month period saw 300 women claiming prizes, which cleaned out the prize fund. “Within a short time, female weavers took on apprentices. Besides providing substitute workers for male weavers engaged in war, the new weavers would prove to have long term consequences on the direction of Irish linen industry.”

Napoleon was finally defeated in 1815. Unlike after WWII, however, the woman were not thrown out of the industry when soldiers returned to civilian life. The market was too hot, even with the massive drop in war demand. By 1851, at least a third of Irish linen weavers were women. Even more worked in cotton weaving. The linen cloth market simply demanded large numbers of weavers. “Commercial interests,” writes McKernan, “had no incentive to exclude” women from the industry. 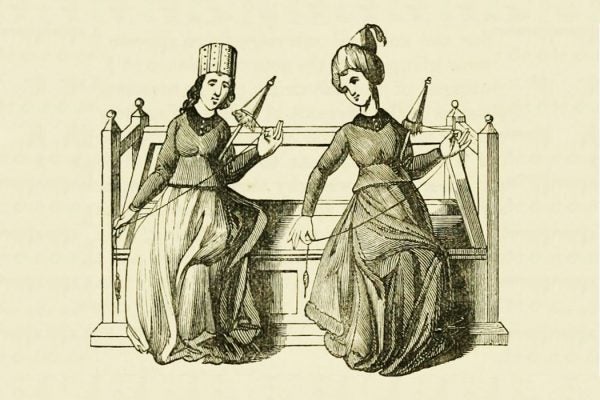 The Silkwomen of Medieval London

A group of skilled women ran the silk-making industry in 15th century London. So why didn't they protect their workers' rights by forming a guild?