Despite Donald Trump’s claim that he is a “handwriting analyst,” it’s not possible to read someone’s mind through the curlicues of their writing. 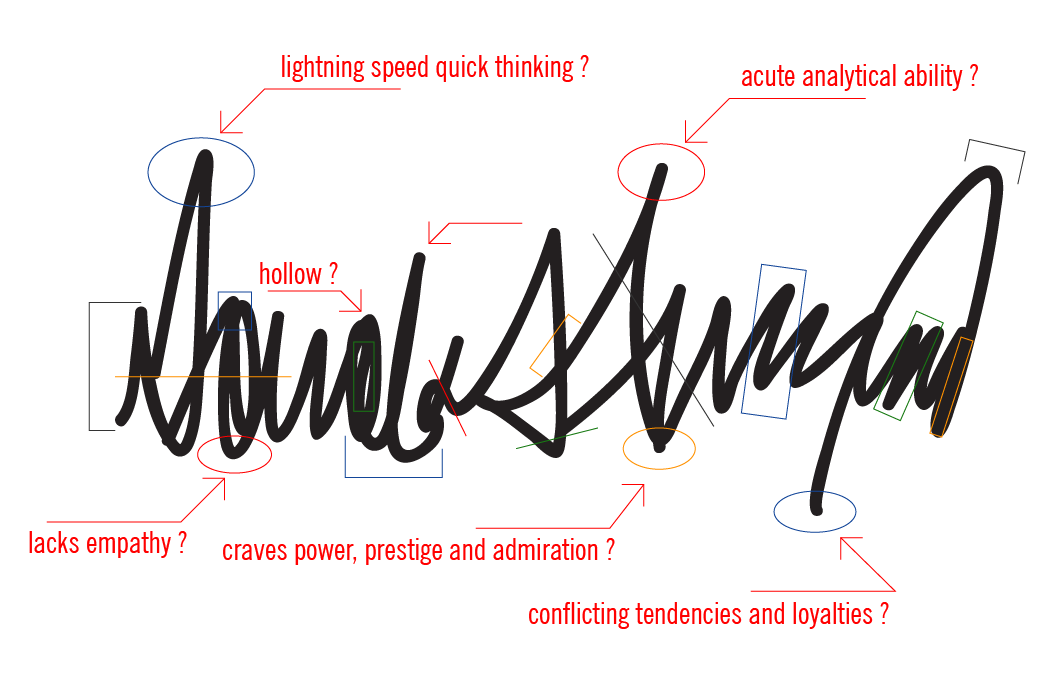 Donald Trump is a handwriting analyst—or so he claims. In a tweet sent after the appointment of Jack Lew, the former Treasury Secretary, Trump wrote: “Lew’s handwriting shows, while strange, that he is very secretive—not necessarily a bad thing.”

I am a handwriting analyst. Jack Lew’s handwriting shows, while strange, that he is very secretive—not necessarily a bad thing.

According to other handwriting analysts, Trump’s signature can provide insights into the president’s character, but they disagree on what those insights are: either he “lacks empathy and craves power, prestige and admiration” (Michelle Desbold in Politico) or he has “acute analytical and lightning speed quick thinking” (Kathi McNight for CNN).

Handwriting analysis—also known as graphology—has been deemed a pseudo-science by most. It was invented in the eighteenth century, gained traction in the 19th when psychology was born, and took off in the early twentieth century, along with notions of the individual self, which coincided with fears about the individual in an age of modernization and mass culture. In the courts, the validity of handwriting as evidence—authenticating the writer of a manuscript, for instance—has always been dubious, and many of the techniques used today are the same as those employed in Renaissance England.

The idea that handwriting offers a window into the inner self first arose in the West during the Romantic era (late-eighteenth and early-nineteenth century), when spontaneity, originality, and individuality were prized. Edgar Allan Poe wrote a series for Graham’s magazine that analyzed the handwriting of famous literary figures. Poe claimed that William Cullen Bryant, whose writing Poe did not like, had handwriting that looked like “one of the most commonplace clerk’s hands which we ever encountered, and has no character about it beyond that of the day-book and ledger.” A now-obscure female author showed “a strong disposition to fly off at a tangent.”

The idea of graphology as a formal enterprise and theory arose later in the nineteenth century, when a French clergyman, Abbé Jean-Hippolyte Michon, added empirical science into the mix. He founded a journal, La Graphologie: Journal de l’autographes (Graphology: Journal of Autographs), which, in its inaugural issue on November 18, 1871, used the term “graphology” for the first time. Michon offered free handwriting analysis to the journal’s early subscribers. He followed that with a lecture announcing his new science, traveling across Europe to explain and demonstrate graphology. Michon evangelized for his cause: “Graphology has proved itself to be a new tool for the moral world… one that has appeared through divine intervention at the height of material advances brought about by the discovery of the steam engine and electricity.”

Michon published two further books elucidating his system, La méthode pratique de graphologie (Practical Methods of Graphology) and Système de graphologie (The System of Graphology). A third text, Histoire de Napoléon ler d’après son écriture (The Story of Napoleon through the Lens of His Writing), was devoted to analyzing Napoleon’s handwriting. In these books, Michon drilled into readers the importance of practicing graphology scientifically, which meant conducting painstakingly detailed research. “I began by classifying my collection of autographs of strong-willed authors and weak-willed authors,” Michon wrote of his rigorous scientific method. “The comparative research of thousands of handwriting samples shows that all weak-willed people cross their ‘t’s feebly. The line is always weak, filiform, and terminates with a scarcely noticeable pin-head . . . [I]n contrast, all strong-willed writers cross their ‘t’s forcefully and firmly, while exerting strong pressure on their pens.”

As graphology spread, it joined other pseudosciences, such as phrenology and eugenics, that used fake empiricism to discriminate.

Michon argued the soul shows itself scientifically through handwriting when someone “enters into spontaneous and free life and wants to express his thoughts and feelings towards other people quickly, without effort, without study, without being concerned in the least about forming letters well or badly.”

Michon’s ideas caught on in Germany later in the nineteenth century. In 1890s Germany, the main proponent of graphology was Wilhelm Preyer, a physiologist who stated that handwriting was “brain writing.” Preyer divided the brain into the “mind,” which is rational (ego), and the “soul,” over which we have less control (id), and argued mind and soul are revealed through the motor actions one takes when writing. Preyer’s disciple, Ludwig Klages, explained that, in handwriting, the movement between mind and soul is “caught” and can be interpreted. As the Germans took on graphology, Michon’s concept of the soul was slowly replaced by Freudian and Jungian theories of instinctual drives and psychological complexes. The German psychoanalyst-graphologists added more identifying signs; if someone put a lot of pressure on the pen, for instance, he had a strong libido. If he used “downward plunging strokes,” he had an earthy nature. As Freudian and Jungian theories of the individual psyche spread, so would the psychological analysis of handwriting.

As graphology spread, it joined other pseudosciences, such as phrenology and eugenics, that used fake empiricism to discriminate. Phrenologists claimed that measuring the size of skulls and areas of the brain could determine character. Phrenology was used to justify European superiority over other races—even to create a hierarchy of races based on skull shapes—and to claim male superiority over women. Eugenics examined hereditary traits to make similar false claims about the superiority of races, ethnicities, and genders and advocated reproducing desired heredity traits and eliminating undesirable ones.

Graphology played a role in similarly problematic practices: Thomas Byerley, a British journalist, argued that the physical act of writing could not be faked and so could be used to determine criminality and mental illness. Exceptions were made to the so-called rules of graphology to help smooth out problematic conclusions. For instance, geniuses with bad handwriting were excused from being labeled idiots or criminals because “men of intellect sometimes work under great nervous tension. They see ahead and feel the spirit of that which they are writing, and thoughts flow too quickly for the pen.” The flourishes and ascenders of a person’s script became a common tool for assessing employees to ascertain, for instance, if applicants are controlled by their minds, “indicated by the smoothness, evenness and refinement of their pen strokes; others are controlled by their bodily appetites, as indicated by the thickness and coarseness of the strokes,” wrote one expert. Graphologists had a steady business counseling people on how to answer marriage proposals as well.

Graphology’s reasoning can often be head-scratching.

Graphology continued to be popular, if slightly less so, throughout the increasingly empirical twentieth century. Today it is practiced by licensed experts, and in some cases employers have job applicants’ handwriting analyzed by a graphologist as a precondition of employment. The practice even gained currency in marketing as a means “to obtain a better understanding of consumer behavior,” as James U. McNeal, a marketing professor, wrote in the Journal of Marketing Research.

One of the leading graphologists of the twentieth century, Eric Singer, had his 1950 The Graphologist’s Alphabet illustrated with adorable line drawings that only manifest how absurdly metaphorical and culturally specific are so many graphological “findings.” A g loop closed horizontally indicates “domestic tyranny, often caused by sexual disappointment,” and a changing angle represents a split personality. If you enclose your signature in a circle you have “peasant shrewdness” and a “spider-like attitude.”

Andrea McNichol’s 1991 Handwriting Analysis: Putting It to Work for You offers strategies for individuals to analyze people in their life, such as “who is lying about his age, which potential mate is more considerate, who cheated his customer and which babysitter is on drugs.” McNichol, whose author bio states that she has been “consulted by the FBI, the U.S. Department of Justice, Scotland Yard, the U.S. Department of Defense, and Fortune 500 companies,” explains that people who do not dot their i’s are untidy, and those who write in all capital letters are egotistical. Stable people cross their t’s in the middle of the ascender (upward stroke). Those who slant their words to the right are forward looking, whereas those who slant to the left look backward. If you use long descenders, as in the bottom of the letter g, you are sad, and if there are excessively wide spaces between letters, you are abnormal. As McNichol explains: “Abnormally wide spacing is extremely strange and abnormal because so few people do this. Anytime you see a writing that is abnormal, it means that the writer in abnormal. . . The abnormal distance he puts between each letter symbolizes the abnormal distance he puts between himself and other people. So this person is socially isolated.”

Graphology’s reasoning can often be head-scratching. McNichol claims that the person who wrote “Do you want cake?” with “little lines inside the ovals” is a liar, because “studies of people found to be ‘chronic liars’ show that an overwhelming percentage of them have these stabbed ovals throughout their writing. Similarly, an overwhelming percentage of people who continuously stable ovals are found to be liars.” She continues to help us remember this lesson: “a good way to remember the trait of the stabbed ovals is to think of ovals as little mouths. The writer who stabs his ovals can be thought of as ‘one who speaks with a forked tongue.’  If you ‘open your ovals’ you ‘open your mouth —and the words just come tumbling out.’ If you are secretive, you put a loop in your oval. If you are very secretive, you put a double or triple loop in your oval.”

Perhaps it was McNichol’s book that Trump read; the ovals in Lew’s signature are the tell for Trump, too. But read another book on graphology—or do a quick Google search—and you will find claims that loops in ovals reveal an ability to negotiate or a desire for affection.

Despite what Donald Trump may believe, our handwriting does not reveal our inner selves. However, a belief in graphology—that handwriting reveals the soul, psyche, or personality—is telling. 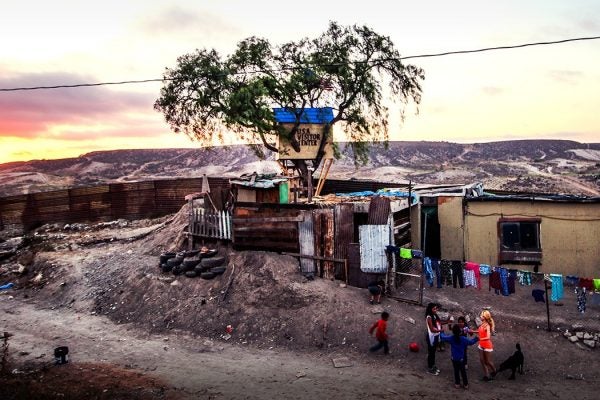 Can Art Make a Difference at the US-Mexico Border?