In the era of Louis XV, it was fashionable to drench oneself in “animal scents.” 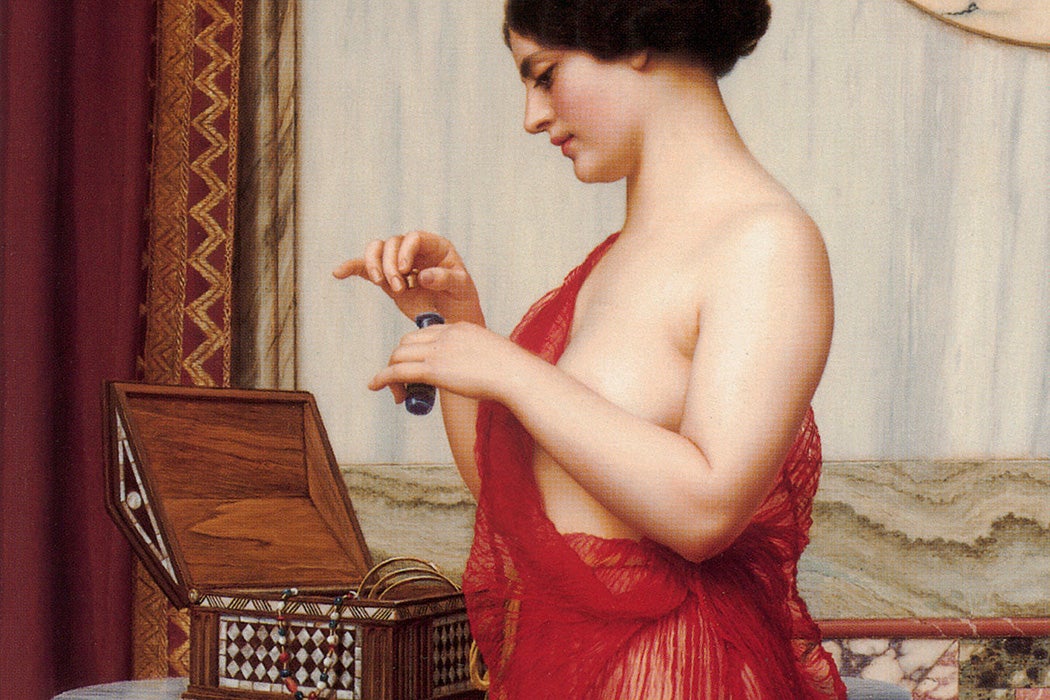 Smell is a strange portal. In his Reasoned Dictionary of French Architecture, the French art historian Eugène Viollet-le-Duc recounts how an elder noblewoman, “of the court of Louis XV,” passing through a hall stinking of human excrement, exclaimed “This smell reminds me of good times!” The Versailles of her childhood was gone, but its characteristic stench brought her home again.

It was an era of less scrupulous sanitation. The malodor of privies and cesspools was no doubt part of the distinctive bouquet that jogged the lady’s memory. But it wasn’t just the chamber pots that reeked. In the era of Louis XV, it was fashionable to drench oneself in “animal scents:” musk from the scent glands of fanged Himalayan deer; civet from the perineal glands of civet cats; and ambergris from the intestines of sperm whales. Noblemen perfumed themselves with the same reeks that wild beasts used to mark their territory.

In their natural state, each of these substances smell about as bad as you would expect.

In their natural state, each of these substances smell about as bad as you would expect. The noxiousness of civet, for instance, can be indicated by the fact that early settlers of Virginia thought the skunks they smelled around the woods were a local variety of civet cat, and proposed bottling and selling their secretions for “good profit.” In the same vein, human excrement was occasionally referred to as “occidental Civet,” as the historian Karl H. Dannenfeldt notes in the Journal of the History of Biology.

What made these animal stenches so popular? Concentration makes all the difference between sickening and intriguing. Undiluted, they are rank and fecal-smelling; watered down and mixed with other fragrances, they help perfumes linger longer on the skin by acting as fixatives, and impart a subtle bodily funk.

This frank animalness was associated with sensuality. As the artist and designer Lee Jensen notes in “Skank, or the Queer Fascination with Animalic Notes in Contemporary Niche Perfume,” even today, many popular sources of fragrances have a little something fetid to them:

…in myrrh, styrax, and labdanum, we may encounter the balsamic note of the scalp, something sweaty and pungent. From costus root comes an oil with a sultry odor, akin to rancid fat, and from the jewel hibiscus we get ambrette seed oil, which has strong sweaty and fatty notes, the plant equivalent of musk.

There were also more pragmatic reasons for the adoption of animal scents. Early physicians believed that the nostrils led directly to the brain, meaning that smells had potent effects on the body. The physician Giovanni Cardano wrote that “smell alone amongst the senses can either destroye or quite remake the man.” In this sense, the benefit of animal-derived perfumes was not so much that they smelled good but that they smelled strong. Powerful odors could provide a shield of protection against the more dangerous stenches exuded by the sick and dying.

This was a time in which travelers carried powders of incense and aloewood on the road so that they could fumigate their inn rooms by casting them on the fire. Ladies strung their necklaces with hollow beads filled with ambergris, and wore tiny perfume flasks as earrings. Rumors circulated of murder by poisonous perfume. The best protection was living in a constant cloud of strong scent.

But fashions change, and so does medical advice. By the mid-eighteenth century, popular feelings about dangerous odors had turned definitively against civet and musk, and doctors had begun to urge their patients to deodorize their spaces completely, rather than fumigating them with strong scents. As hygiene was reimagined, so was fashion. Rather than exuding fragrance from every fold of your dress, curl of your wig, and flutter of your fan, the new standard was to smell, ever so faintly, of fresh flowers. It was in this newly deodorized world that an elderly lady could sigh with nostalgia for the stinks of a lost time.

Share Tweet Email Print
Have a correction or comment about this article?
Please contact us.
beauty productsscentJournal of Asia-Pacific Pop CultureJournal of the American Oriental SocietyJournal of the History of BiologyJournal of the Royal Asiatic Society

Blattes de Byzance "in India: Mollusk Opercula and the History of Perfumery"
By: JAMES McHUGH
Journal of the Royal Asiatic Society, THIRD SERIES, Vol. 23, No. 1, Special Issue: Perfumery and Ritual in Asia (JANUARY 2013), pp. 53-67
Cambridge University Press on behalf of the Royal Asiatic Society of Great Britain and Ireland
Europe Discovers Civet Cats and Civet
By: Karl H. Dannenfeldt
Journal of the History of Biology, Vol. 18, No. 3 (Autumn, 1985), pp. 403-431
Springer
The Disputed Civets and the Complexion of the God: Secretions and History in India
By: James McHugh
Journal of the American Oriental Society, Vol. 132, No. 2 (April-June 2012), pp. 245-273
American Oriental Society
Skank, or the Queer Fascination with Animalic Notes in Contemporary Niche Perfume
By: Lee Jensen
Journal of Asia-Pacific Pop Culture, Vol. 2, No. 1 (2017), pp. 53-72
Penn State University Press