Wilbur and Orville Wright may not have been “first in flight,” but they were first in taking care of their nieces and nephews on the weekends. 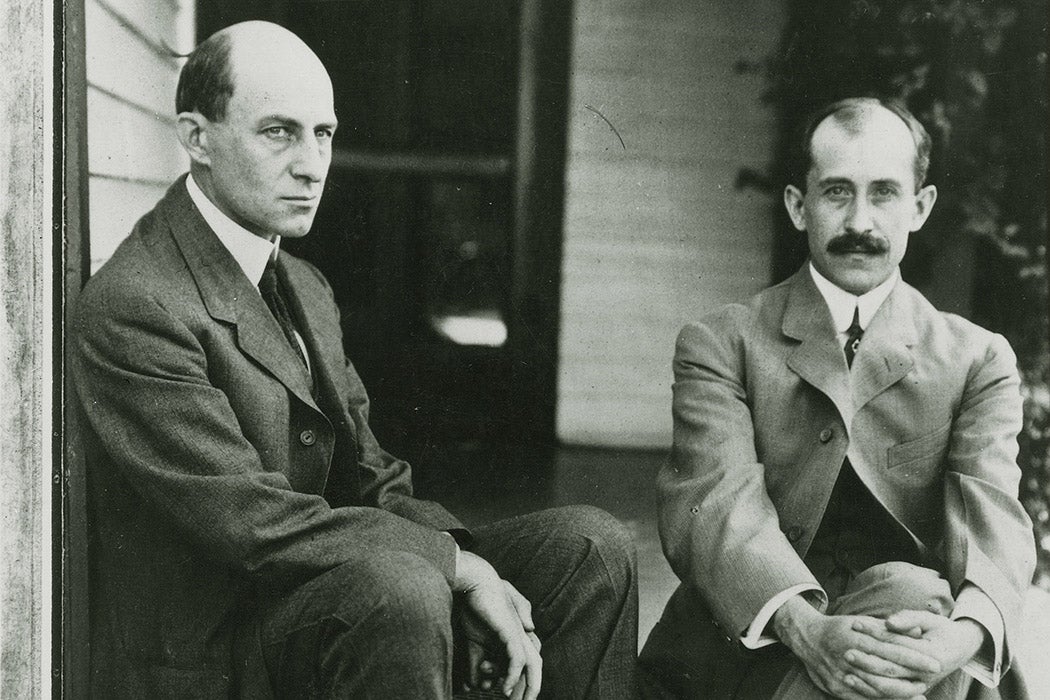 Whether they were “First in Flight” or just “First in Sustained, Piloted, Controlled, Powered, Heavier-than-Air Flight of Lasting Technological Significance,” the Wright brothers are unlikely to be left out of the annals of aviation history. Progressing from the design of human-weighted gliders through motor-driven propeller planes, Orville and Wilbur Wright solved problem after problem—many of them insurmountable by others—to put a plane into the air and keep it there.

Their mechanical prowess also depended on their willingness to argue out an issue without holding a grudge.

Much of their success came through experimentation: tests in the wind tunnel they built at their workshop in Dayton, Ohio; countless models of wings and craft; and test flights at the sand dunes near Kitty Hawk, North Carolina. But as those closest to them would testify, their mechanical prowess also depended on their willingness to argue out an issue without holding a grudge.

As Horace Wright (b. 1901), son of Wilbur and Orville’s older brother Lorin, explained, their accomplishments were “probably due to the fact there were two of them. And when one would get an idea, the other would try to prove him wrong. They didn’t try to prove they were right.”

Not that the brothers shared a personality or ever took the same approach to a problem. According to Horace, Wilbur “did an awful lot of thinking. […] Wilbur was never the person to talk much. But he could put an awful lot of meaning in a few words.”

Orville, on the other hand, “loved an argument.” As Horace recollected,

you never knew what he thought. I’ve seen him, many a time bait somebody on something or he just loved to get into a good argument, and I’ve seen our family dinners, Dad and some of the others get talking, and they’d get up there and you’d think they were going to have a fist fight. No, they didn’t resent anything afterwards, I mean some people when you argue with them they get sore. Generally, none of them would.

Horace’s elder sister, Ivonette (b. 1896), also remembered listening to Wilbur and Orville think out loud every Sunday, especially when

Horace, Ivonette, and their sister and brother, Leontine (b. 1898) and Milton (b. 1892), grew up just a few blocks from the Wright brothers’ house in Dayton. On Sundays, Orville and Wilbur babysat their nieces and nephews, reading to them, plying them with homemade candy (“fudge at first. That went too quickly so [Orville] got making chewy kinds of candy, he’d make caramel or butterscotch”), and fixing their broken toys.

Ivonette remembered being invited to write in the notebook the brothers used to track the details of their first flight. As she described it, it

was a small book so they could keep it in their pocket. When I was sitting on Wilbur’s lap one time, he said, can you write your name? And I was just about the age to be learning to write my name, and he said, well let’s see, let’s see if I can find something that you can write it on. So he pulled this little book out of his pocket and I wrote my name twice on it, and later…when I saw my name written twice in the diaries that was [sic] sent to the Library of Congress, I realized that that’s what had happened.

While the stories told by Horace and Ivonette reveal a way of thinking and reasoning that helped the Wrights to design a reliable control system for their experimental aircraft, they also show us something we don’t usually read about in history textbooks: the brothers were excellent babysitters.

The interviews with Horace and Ivonette were captured on reel-to-reel by graduate students at the University of Dayton in 1966–67 and transcribed in the late 1970s. The students spoke with several people who knew the Wright brothers, as well as with friends and colleagues of Charles F. Kettering, inventor of the electrical starter for automobiles. The transcriptions are now part of the Wright Brothers – Charles F. Kettering Oral History Project from the University of Dayton.

Swing for the bleachers with these awesome lantern slides from the early years of professional baseball.