Swing for the bleachers with these awesome lantern slides from the early years of professional baseball. 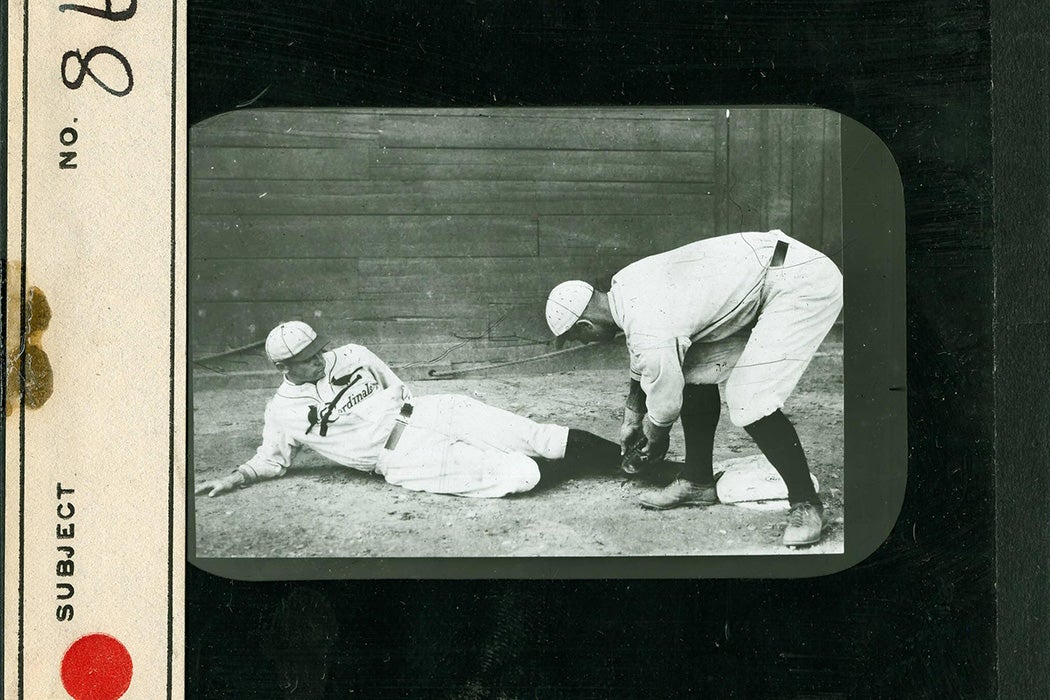 Take me out to the Leslie Mann Baseball Lantern Slide Collection, contributed to JSTOR’s Open Community Collections by Springfield College.

Leslie Mann was a Major League Baseball outfielder from 1913 to 1928, helping the Boston Braves win the 1914 pennant (and the World Series) after they had been stuck in the basement for most of the summer. After he retired, with a respectable .282 average, he began teaching the American pastime to aspiring players and coaches, writing a manual, The Fundamentals of Baseball, that was shipped along with instructive lantern slides. Mann even invented projectors to be used with the slides.

Thanks to a public history internship, a Springfield College student named Daniel Hurlburt was able to locate the slides that correspond to many of the pages in Mann’s manual and to provide extensive metadata for them. With thanks to Hurlburt, we present selections of slides in the collection, including original captions from the manual.

Bill Doak demonstrates the proper way to hold a baseball when pitching a fastball. His fingers follow the formation Leslie Mann described in his instruction course manual, as Doak has his index finger over as much of the seams as possible, which allows the baseball to rotate off his fingers. Doak also maintains a gap between his index and middle finger on the baseball. This gap is important for helping Doak maintain maximum velocity and control on his pitch. The baseball leaves his hand by rolling directly out over the tips of his middle and index fingers, which occurs properly because of the correct finger position that Doak maintains on the baseball.

Verne Clemons rests his elbows on his knees as he stares forward toward the pitcher. Clemons is demonstrating how a catcher creates a target spot for a pitcher to throw the baseball. In this slide, Clemons is giving the catcher a knee high target, meaning that Clemons has placed his glove around the knee level of a standing person. Of course, in order for Clemons to actually place his glove there and position himself comfortably, he needs to squat down. Clemons has placed his elbows on his knees and has placed his glove directly across the middle of his body. This is good because it gives the pitcher a wider target, and allows the level of error to be higher. What that means is that Clemons is giving a knee high target in the middle of his body, but if the pitcher’s throw is a bit off either to the left or to the right, Clemons would still be able to adjust his body to catch the thrown ball. If Clemons had his glove to the right side of him as the target, and the pitcher threw the ball to the left side, Clemons wouldn’t be able to field the ball because his body would not be positioned straight behind the plate. Therefore, Clemons is in perfect position as he has centered his body and has placed the glove directly across the center of his body, giving the pitcher a wide range to target.

In this image, Fred Toney shows how to properly throw an underhand throw as described by Leslie Mann in his manual. In the slide, it appears that Toney is still maintaining the same hold of the ball that he would be if he was pitching a fastball overhand. For example, his thumb appears to be on one side of the ball, while his index and middle finger appear to be spread apart on the other side of the ball. As Mann describes, it is very important to maintain the proper holding of the baseball, especially with something like the underhand throw, which can be more difficult to control. As Mann describes, when Toney throws the ball underhand and with the proper finger position, the pitch should start near the ground, but end up around the middle of the batter by the time the pitch reaches home plate. An underhand throw makes a slightly upward curve as it moves towards home plate. Overall, Toney shows the proper format for how to throw an underhand ball successfully.

In the slide, [George] Burns is demonstrating the importance of blocking the sun when a fly ball is hit to you in the outfield. Burns’s glove completely blocks the sun from his eyes, which is noticeable by the fact that the rest of the field is bright but his eyes are completely shaded by his glove. Burns will be able to tell exactly where the ball is going to fall by shading his eyes. This is important both for the success of the team, but also for Burns’s own safety. Burns increases the chances of him successfully catching the baseball because he is able to get a better understanding of exactly where the baseball is going to land by shielding his eyes. He also protects himself because if he didn’t know where the baseball was, there is a chance it could hit him in the head and cause him injury. This ability is very important for an outfielder to have.

In this lantern slide, [Jeff] Pfeffer demonstrates the cross fire pitch used by many pitchers in baseball. The cross fire pitch attempts to hide the baseball from the view of the batter, which keeps the batter guessing as to what type of pitch the pitcher is throwing. The less time that the player has seeing the ball, the more successful the pitcher will be as it will be harder for the batter to get a read on the pitcher or develop an expectation for what type of pitch the pitcher plans on throwing. In the image, Pfeffer drops both of his hands behind his legs, or the back of his body, which blocks the hitter’s view. Pfeffer also keeps the ball hidden in his glove as he winds up his throw, which is important in case Pfeffer isn’t able to block the baseball completely using his legs. He would still have the baseball blocked with his glove if this occurred.

[Jack] Fournier is demonstrating the correct way for a batter to complete the drag bunt. The drag bunt occurs when the player attempts to bunt the baseball down either the first or third base line. This means that the batter is attempting to bunt the baseball to a location where there are no fielders standing. If Fournier successfully bunts the ball down the first or third base line using the drag bunt, then a player will have to run towards the baseball in order to field it. While this is occurring, Fournier would run to first base in an attempt to beat the throw by the fielder to the base. Fournier mainly follows the exact same bunting stance as described earlier in the manual by Mann as he keeps the bat on a horizontal level line in front of his body but across the plate, holding his hands in the same position. However, Fournier brings his right arm in close to his body when completing a drag bunt, which is what he does here. Fournier then uses his left arm to make a half circle out over and across the plate. This arm position would allow Fournier to successfully complete a drag bunt down the first base line.

[Jack] Smith is demonstrating the incorrect way for a baserunner to slide when using the straight slide. Though Smith’s body position is generally correct as he is sliding directly into the middle of the base, his leg position is incorrect as he crosses his left leg over his right leg and slides into the base, with his left foot touching the base. This is incorrect because it restricts Smith’s mobility as he slides into the base. If the ball beats Smith to the bag, then Smith may be forced to adjust his slide in order to attempt to avoid a tag by the fielder who is covering the base. However, when Smith chooses to cross his legs, he is restricted in his movements by his right leg which is tucked away under his left leg. This isn’t ideal and could be the difference in Smith being able to adjust his body accordingly in order to avoid a tag by the fielder, which would allow him to reach the base safely. Secondly, it is dangerous for Smith to choose to twist his legs across one another like he does here, as it could increase his chances for injury because his mobility is restricted. From here, Smith is basically sliding on top of his own leg, which could put a lot of pressure on his bottom right leg and could lead to injury.

This lantern slide…represents the final position that all the infielders should be in after the batter chooses to bunt the baseball. The second baseman stands covering first baseman while both the pitcher and first baseman have moved from their usual spots towards the first base line in order to attempt to field the bunt. The third baseman has also broke from the base into the infield in an attempt to field the baseball while the shortstop remains next to second base. There is no catcher pictured in this slide, but the catcher would also usually break from his original position towards the baseball.

…Bill Doak, a pitcher for the St. Louis Cardinals, has just thrown a type of pitch called the fade away. Doak is demonstrating his body position after the pitch has left his hand, as his arm is coming forward in front of his body.