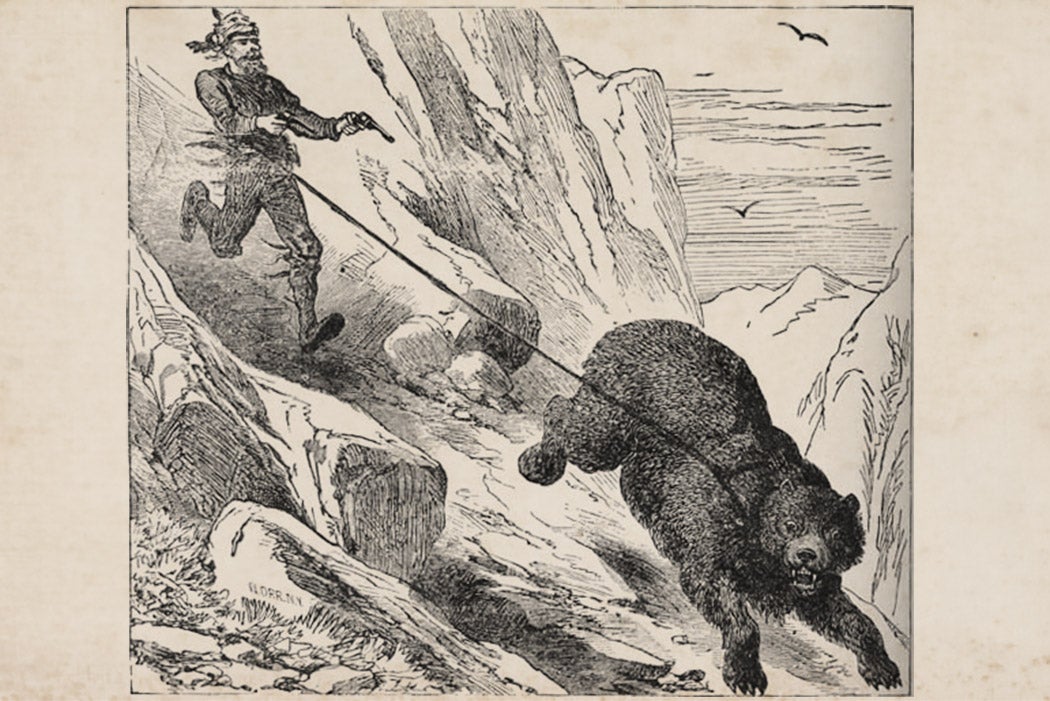 If you know anything about Grizzly Adams, it’s most likely thanks to a movie and television series in the 1970s, both of which presented him as a rugged frontier woodsman with a deep connection with the wildlife of the American West. As historian Jon T. Coleman writes, Adams took on that persona only in the last decade of his life, after living to middle age in a very different environment.

John Adams was born in Medway, Massachusetts, in 1812, and he grew up in a family of farmers and shoemakers. After a brief stint capturing New England animals for circuses and traveling shows, he returned to shoemaking. But, as Coleman notes, in 1849, after a fire destroyed his business, Adams headed west amid the hordes of the California gold rush. He left behind a wife and two daughters, none of whom were ever mentioned in the promotional biographical materials he later helped create.

He walked into the Sierra Nevada, grew an impressive beard, and began dressing in the skins of animals and feeding himself with nuts and berries.

“The spectacle of a bearded patriarch commanding nature’s obedience hid the reality of an insolvent shoemaker who traded his own flesh and blood for a California dream,” Coleman writes.

In California, he spent three years farming, ranching, and investing in mining and real estate ventures. Then, in 1852, at age forty, he gave it all up. He walked into the Sierra Nevada, grew an impressive beard, and began dressing in the skins of animals and feeding himself with nuts and berries. The next year, he returned to the business of his youth, hiring two “Indian boys” and another young man to collect wild animals from northern California and show them off in a traveling menagerie.

Adams’s work was part of a thriving edutainment industry: exotic animal shows that promised to teach the nineteenth-century public about nature and the wider world, while also offering the alluring prospect of all kinds of havoc.

The process of taming the animals was also brutal. For example, Adams obtained the bear known as Ben Franklin after killing its mother before the cub was big enough to open its eyes. He then forced a greyhound to suckle the bear by killing all but one pup from her recent litter. That puppy, known as Rambler, became Franklin’s companion. Adams kept Franklin and his other bears in line with frequent beatings, as well as rewards for good behavior, but they were never completely tame. He described being “beaten to jelly, torn almost limb from limb, and nearly chawed up and spit out by these treacherous grizzly bears.”

Franklin ended up bankrupt in 1859, sold what remained of his menagerie to P. T. Barnum and others, and took a job with Barnum’s show, performing around the Northeast. But the physical wear and tear of his unusual occupation caught up with him, and he died in 1860, back in Massachusetts with his wife and one of his daughters.