The Rise and Fall of the Jet Pack 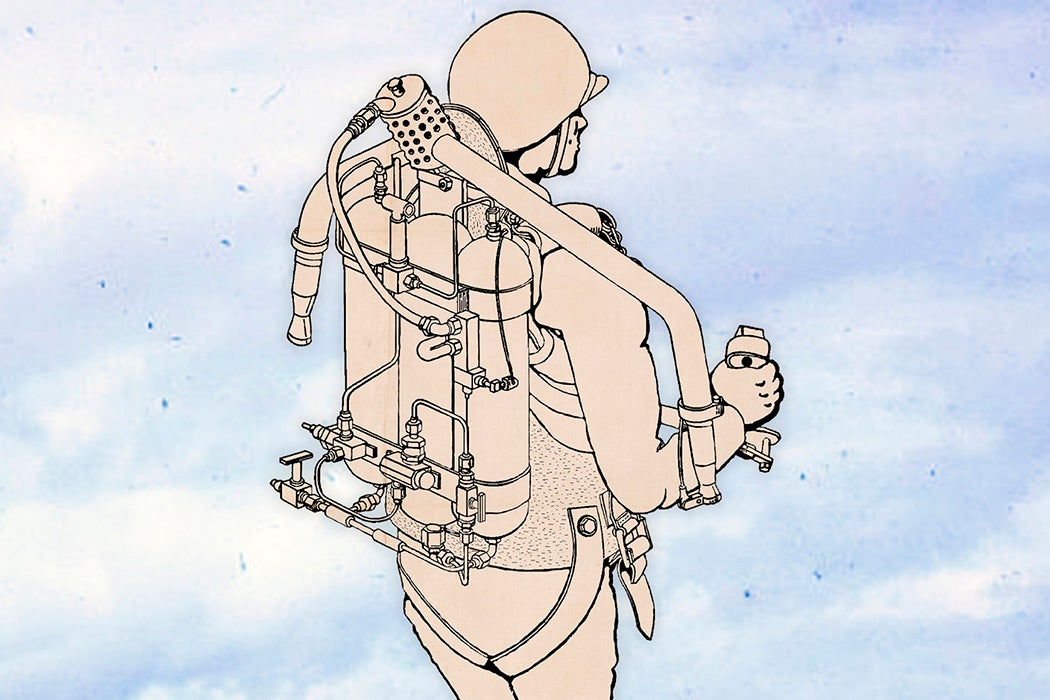 The human body is not well-suited for flight. We’re somehow both bulky and gangly, with legs that kick and flail once they leave the ground. Our anatomy is not built to glide through the air—or even fall gracefully. We’ve tried to game nature with kites and gliders and wax wings. But no amount of self-flapping could lift us off the earth.

So imagine the excitement in the 1950s, when the Army contacted Bell Aerospace Corporation to develop a device that would realize this fantastical idea. Robert Roach, a rocket engineer who worked at Bell Labs in the 1960s, chronicled the unbridled optimism surrounding this footnote in the history of human flight in a 1963 essay, “The First Rocket-Belt.”

The first flights were attempted in 1960, with the pilot tethered to a ceiling for safety (making early test flights resemble the motions of a jerky marionette).

Bell rocket engineer Wendell Moore spearheaded the quest to “join man with rocket,” Roach wrote. He created the “rocket-belt” (a less exciting name for the “jet pack”), which consisted of a 280-pound rocket motor that shot hot gas through nozzles on either side of the device. The pilot was fitted to the machine with a body-contoured fiberglass corset.

The first flights were attempted in 1960, with the pilot tethered to a ceiling for safety (making early test flights resemble the motions of a jerky marionette). Moore was the first tester: “the job was one that he wanted, earned, and cherished,” in Roach’s assessment. Unfortunately, during one of those tethered flight tests, Moore ended up falling ten feet onto a concrete floor, fracturing his knee. He never achieved free flight. Instead, he was replaced by Harold Graham.

After dozens of tethered practice flights, “on the morning of April 20, 1961, all conditions were ‘go’ for an attempt at free flight,” Roach wrote. A crowd of observers gathered along the flight path, with videographers and photographers straining to get a visual through the fog. A doctor was ready to monitor Graham’s vitals before and after the flight. A man was on standby with a fire extinguisher. Just in case.

But Graham didn’t turn into a modern-day Icarus. Instead, he rose 18 inches into the air, and for 21 seconds he flew forward 100 hundred feet at up to 10 miles per hour. As Roach put it, “one of man’s ageless dreams—unencumbered free-flight by a man utilizing an integrated propulsion system—was realized.”

The potential uses of the rocket belt were thrilling to envision! According to Roach, “some see it as the answer for the traffic-jammed commuter. Others see humane rescues from points of difficult access.” Graham traveled around the country doing demonstrations: flying across streams, down hills, over a fire truck. The Bell rocket belt even flew in front of Cinderella’s castle at Disneyland in 1966 and zipped around the stadium at the first ever Super Bowl, in 1967.

Regrettably, the jet pack would never truly take off: Rocket belts were too expensive, not fuel efficient, and had an extremely short flight duration. The military stopped funding the project, and the rocket belt became a novelty.

However, the U.S. military may soon rejoin the jet pack game. Recently, the Defense Advanced Research Projects Agency announced that it was open to proposals on the feasibility of single-rider portable air transport systems. Roach’s 1963 essay was right: “Only time will tell the extent of the role to be played by this man-machine mode of flying in the future of man’s transportation.”

The First Rocket-Belt
By: Robert D. Roach, Jr.
Technology and Culture, Vol. 4, No. 4, The History of Rocket Technology (Autumn, 1963), pp. 490-498
The Johns Hopkins University Press and the Society for the History of Technology