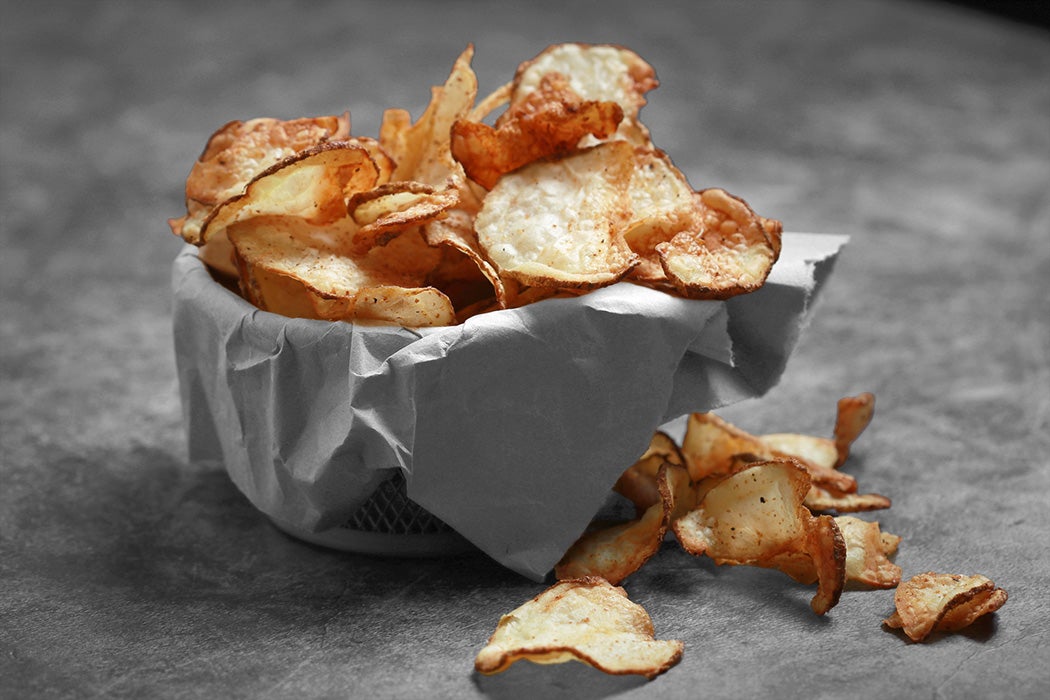 Can anyone own a recipe? The combination of this-with-that to make something wholly unique? When (if) that does happen—is this the dish’s authentic origin story?

The answer is complicated, librarian Lynne M. Olver argues. “Throughout history, claims for how new dishes were introduced range from the reasonably plausible to the absolutely impossible. Generally, most new dishes are not invented; they evolve.” And part of that evolution involves folklore, or more accurately, fakelore, the winding tales repeated as truth from generation to generation.

Several foods have fallen victim to fakelore. Take one of our most beloved snacks—the potato chip. As folklorists William S. Fox and Mae G. Banner explain, many believe that the chip originated in Saratoga Springs, New York, in the mid-nineteenth century. After several complaints that his fried potatoes were sliced too thickly, a frustrated cook “sliced the potatoes paper thin, fried them in deep fat, salted them heavily, and served them up.”

The tall tale was helpful to at least one entity, the Potato Chip/Snack Food Association.

A common version of the story holds that the cook’s name was George Crum, and the hard-to-please customer was shipping and railroad magnate, Commodore Cornelius Vanderbilt. Variations on this story have been passed around since at least the late 1800s. But is any of it true?

Probably not, but the tall tale was helpful to at least one entity, the Potato Chip/Snack Food Association. The association and its public relations team were the likely culprit in introducing Vanderbilt as the unhappy customer. The wife of Cornelius Vanderbilt “Sonny” Whitney, the great-great-grandson of Commodore Vanderbilt, also capitalized on the chip’s mythology, publishing the Potato Chip Cookbook in 1977 and “publicizing potato chips and her cookbook in numerous newspaper articles and television appearances.” A local historian, who found no evidence of a Vanderbilt connection, called out Mrs. Whitney as an “opportunist who merely seized upon the potato chip story as a theme for one of her parties.”

All food fakelore isn’t as bitter, though. The origin of clams casino, a clam served on the half-shell and stuffed with herbs, aromatics, and bacon, is also one with questionable beginnings. As with the potato chip story, this dish was purported to be invented in 1917 to satisfy a wealthy and demanding customer, this time Mrs. Paran Stevens, the wife of a hotelier. She was described in her New York Times obituary as “never hesitating to give full expression of her opinions about everybody and everything,” so it probably wasn’t a huge shock when she showed up demanding something special.

Julius Keller, the maître d’ of the restaurant, served her and her guests the improvised and then-unnamed dish, telling her “we shall call it clams casino,” after the Narragansett Pier Casino restaurant. But in her research of the dish, Olver found “no print evidence confirming that Julius Keller was ever employed at the Casino.” This “new” dish was also not so new, and “may have been inspired by popular oyster recipes of the era.” As Olver points out, however, it doesn’t really matter. “Keller was obviously a savvy promoter who knew how to capitalize on a popular trend. And for that alone he should be given credit.”

Food origins can be murky, and though they’re often exaggerations or even lies, they persist. Some stories just cling to us, Fox and Banner explain, either because they’re too fun not to tell or because “the story-telling abilities of the participants in folk processes” are so strong. Everyone just loves a good story.

During the days of the British Empire, soup made from sea turtles was a delicacy. Now it's almost unheard of. What explains the change?