During the days of the British Empire, soup made from sea turtles was a delicacy. Now it’s almost unheard of. What explains the change? 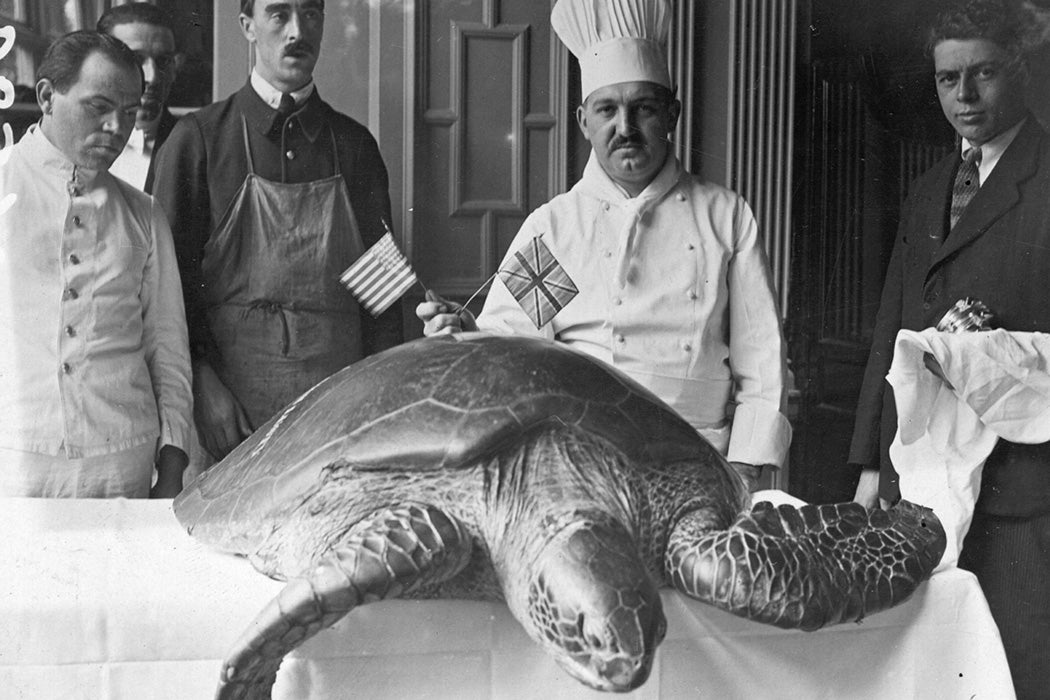 A chef with the turtle he is going to use for a special soup for Independence day celebrations, 1922
Getty
By: Matthew Wills
3 minutes
Share Tweet Email Print

Turtle soup is one of those foods that has almost passed out of memory. Our tastes have changed. But as recently as half a century ago, tourists in Florida could still be served the stuff, along with turtle steaks and even turtleburgers. Green sea turtles from the Caribbean, named for their green-tinged fat, were the source of this meat for centuries. Overharvesting decimated their population, and today it’s illegal to harm or kill them.

“Today, most Europeans and Americans would perhaps find turtle soup exotic and objectionable,” writes scholar May-bo Ching. But three centuries ago, turtle soup was the food of European elites dining off the fruits of colonialism. The English aristocracy slurped it up as early as the 1720s. By the middle of the eighteenth century, turtle soup was haute cuisine.

The turtle’s fins, eaten separately, were simmered in veal broth with onion, “all sorts of sweet herbs,” cloves, mace, and nutmeg.

The first Europeans to eat these turtles were far from royalty, however. They were sailors, who kept live turtles aboard ship to guarantee themselves fresh meat during long voyages. They had learned that the turtles were edible from the indigenous peoples of the Caribbean. Early slave colonies implanted on the islands also used the large turtles as a cheap source of meat for enslaved laborers. West Indian slaveholding elites would adopt turtle soup as a marker of their privileges, however, and their fashion was transported back to Europe. The English especially were “most outspoken in their praise of this sea creature’s virtues” as food.

“Dressing a turtle the ‘West India Way’ became a must-have item in reputable cookery books published in the eighteenth and nineteenth centuries,” writes Ching, who quotes instructions typical in their elaborateness. The turtle’s fins, eaten separately, were simmered in veal broth with onion, “all sorts of sweet herbs,” cloves, mace, and nutmeg.

As the British spread their empire around the world, they took their taste for Caribbean turtle with them. The “West India Way” became the English way. In tracking this multi-continental history, Ching notes that Chinese cooks learned to cook it in the “English style” or “English fashion” for their employers.

Meanwhile, this status marker of aristocracy and colonial power began to be accessible to the middle classes via “civic banquets” sponsored by London mayors. From Britain, the craze spread to the Continent and North America. Ching writes, “the very term ‘turtle soup’ became synonymous with deliciousness in English literature.”

In the late 1860s, green turtle started being canned at a beef-packing plant in Texas. Class food became mass food, with a corresponding heavier toll in harvesting to meet the greater demand. (For those who couldn’t afford the canned meat, there was always mock turtle soup, usually made with calf’s head.)

Green sea turtles were finally classified as endangered by the Convention on International Trade in Endangered Species of Wild Fauna and Flora (CITES) in 1973. A couple of generations removed from that, our sense of taste—in both the class distinction and sensory meanings—has little room for the idea of turtle soup anymore.

The Flow of Turtle Soup from the Caribbean via Europe to Canton, and Its Modern American Fate
By: May-bo Ching
Gastronomica, Vol. 16, No. 1 (Spring 2016), pp. 79-89
University of California Press 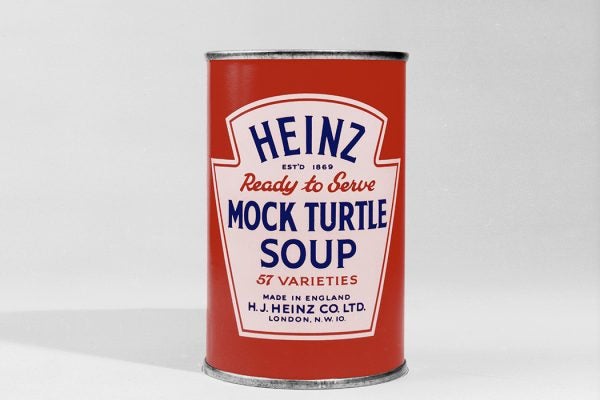