From 1964 to 1972, at least 300 U.S. cities faced violent upheavals, the biggest led by the League of Revolutionary Black Workers, in Detroit. 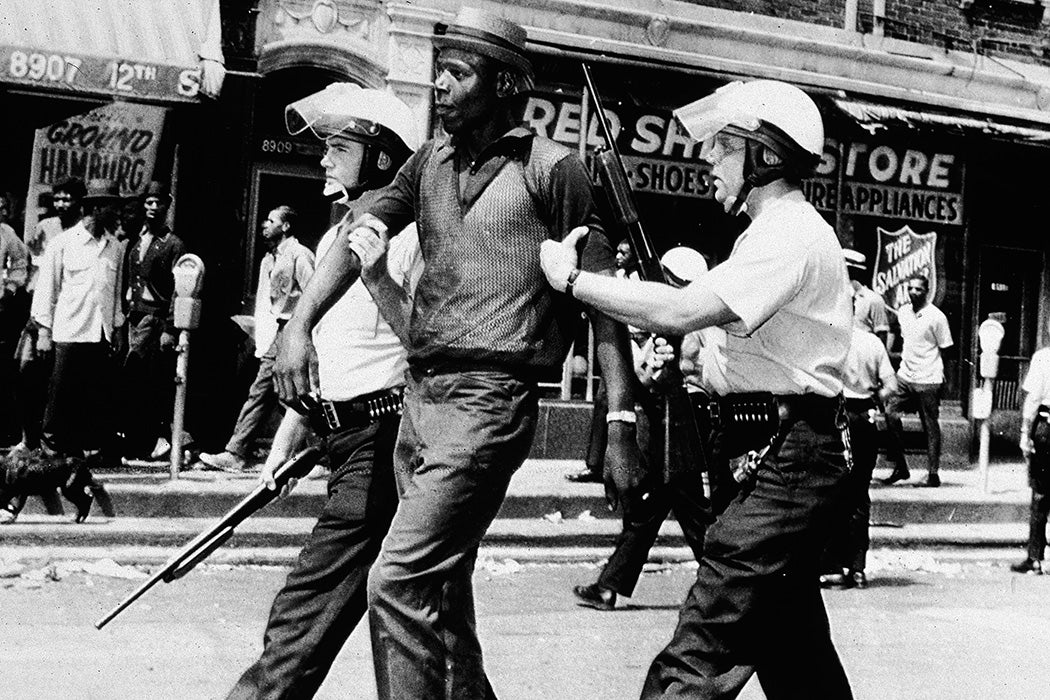 There is a paradox at the heart of the American story we often hear. When Martin Luther King Jr. declared he had a dream, Lyndon B. Johnson is said to have signed it into existence with the Civil Rights Act. The paradox is that the end of systemic racism in this tale coincides with the beginning of a wave of riots that shook America. From 1964 to 1972, at least 300 U.S. cities faced violent upheavals. The biggest of them was the great rebellion of Detroit.

In the summer of 1967, in Detroit, 552 buildings were destroyed and 7,200 people arrested. The President had to send in the Army to quell the largest uprising the United States had faced since the Civil War. An armed confrontation between police and Black veterans in an underground after-hours liquor establishment started it all.

As noted in the work of Mark Jay and Virginia Leavell, graduate students at UC Santa Barbara, a common feeling at the time was that the mostly white police force was an occupying army in the Black ghetto. Some police officers expressed a similar sentiment, as one Police Chief in the LAPD put it about the Watts riots of 1965: “This situation is very much like fighting the Viet Cong.”

The Black slum dwellers of Detroit descended into the conflict, joined by thousands of whites. The motivations for the Black-led revolt, however, had little to do with the altercation between the higher-paid Black workers and the police that triggered the riots. It was frustration; there was anger toward racism in real estate, toward racism in the workplace, and a sense that automation, economic restructuring, and capital flight were rapidly changing the economic fabric of the industrial capital of the world. Things seemed to be changing quite quickly: white people had left inner cities for the suburbs, and many of the Black poor worried that they would be left behind in the process.

The rebellion—described in detail by Jay and Leavell—changed the politics of Detroit. The political establishment had incorporated far more Black people, including a Mayor. And more Black officers entered the police force. But there were other consequences as well, including the rise of Black power organizations and the radical Left.

On May 2, 1968, an unauthorized “Wildcat” strike took over the Dodge Main factory in the Hamtramck Assembly Plant, just outside of Detroit.

Glanton Dowdell, General Baker, John Watson, Mike Hamlin—these are just a few names of radical Black students who were a part of a leftist outfit, UHURU, at Wayne State University. They were radicalized even further by the Detroit rebellion. Some of these students had left their classrooms for the assembly line years earlier, taking their ideological outlook with them to the factories. The rebellion gave them hopes of radicalizing Black workers.

On May 2, 1968, an unauthorized “Wildcat” strike took over the Dodge Main factory in the Hamtramck Assembly Plant, just outside of Detroit. It was in response to a gradual speed-up of production that had been taking place, and included workers of all races. When management responded, it disproportionately punished Black workers, to the silence of their white counterparts. This was the day that DRUM, the Dodge Revolutionary Union Movement, would be formed by Black workers.

As James Geschwender, the late professor at Wayne State University, put it, Black people had “the hardest, dirtiest, and most dangerous jobs.” The late Manning Marable, who was a professor at Columbia, also argued that, amid these conditions, “White union leaders were generally unsympathetic to demands raised by black union members to improve the desperate work-place situation.”

Black workers had a complicated relationship with organized labor. Sometimes it was a vehicle for civil rights, and at other times it was an obstacle to them.  Just as in 1920, Black and white miners defied Jim Crow in Alabama by initiating a statewide walk-out, and just as the rank-and-file of the CIO union desegregated in the South before most institutions, in 1943 we also have a case of 25,000 white workers at Ford’s Packard Plant in Detroit walking off after three Black workers were promoted.

Black workers were hyper-exploited in the factory. Some felt that they had more to lose than white workers, that they ought to organize alone. Some white workers, in turn—often those in union leadership—feared that Black workers were recruited into the factories as strike breakers (on more than one occasion, Henry Ford hoped that this was true). With all of these barriers, only further complicated with anti-Black racism, there were often difficulties in forging class unity. Suspicion pervaded on both sides.

Until the great migration north, most Black workers were agricultural workers. When, alongside many white workers, they migrated to cities in the North, a new Black industrial working class would come into being, according to Manning Marable. The first since slavery, in what was certainly a twentieth-century phenomenon, Black people entered the industrial workforce as they moved into segregated neighborhoods in cities in the North. They struggled to join an industrial system that needed them, but refused to welcome them. Naturally, Black nationalism and radical leftist ideas were in wide circulation under these circumstances, and the audience often worked on the assembly line.

That is why university-educated students like General Baker joined the factories in the early 1960s. Most Black workers, particularly young ones, felt they were victims of police brutality in their neighborhoods. They felt oppressed as workers, and as Black people. Many had an aversion to the Vietnam War, strong solidarity with third-world struggles in Cuba and China, and familiarity with Black-led militant unions like the Brotherhood of Sleeping Car Porters and the National Negro Labor Council. Because they ran the war machine, they knew they were closest to sabotaging it. Revolutionaries across the world flocked to Detroit, eager to nurture workers—people like Chinese American Grace Lee Boggs and Trinidadian socialist C.L.R. James.

As proponents of Industrial Unionism, the League believed that workers should organize across the industry, not just in their own factories.

It was under these circumstances that the Dodge Revolutionary Union Movement (DRUM), an autonomous body of Black workers that would work independently from—and sometimes even in antagonism to—the United Auto Workers union, was formed. DRUM inaugurated itself with a successful boycott. They demanded worker safety, higher representation of Blacks in foreman positions, and that Chrysler refuse to cooperate with apartheid in South Africa.

They also founded a broader “RUM” movement across Detroit. Organizations cropped up with names like FRUM (Ford Revolutionary Union Movement) and ELRUM (Eldon Avenue Revolutionary Union Movement). As proponents of Industrial Unionism, they believed that workers should organize across the industry, not just in their own factories. Eventually, the collective that came out of UHURU, who were overseeing this process, decided by the end of 1968 to unite them all under one umbrella: the League of Revolutionary Black Workers.

By 1969, the newly announced League of Revolutionary Black Workers had its own headquarters, newspaper, and even a high school youth movement that put out a newsletter called Black Student Voice. The League felt that outlets like the Inner City Voice (which sold 10,000 copies a month) and Black Student Voice were means for “unifying its members through print-media making,” according to Chris Robé, a professor of Film and Media Studies at Lehigh University. Eventually, they established a printing press (Black Star Press), a book-store (Black Star Book Store), and made a documentary entitled Finally Got the News.

We often hear about civil rights organizations, and Black power organizations, vying for electoral office. But the League believed in a different kind of power: power over the production process itself.

Read Mohammed Elnaiem’s accompanying interview for this story, with two members of the League of Revolutionary Black Workers who lived in Detroit in the late 1960s, here.