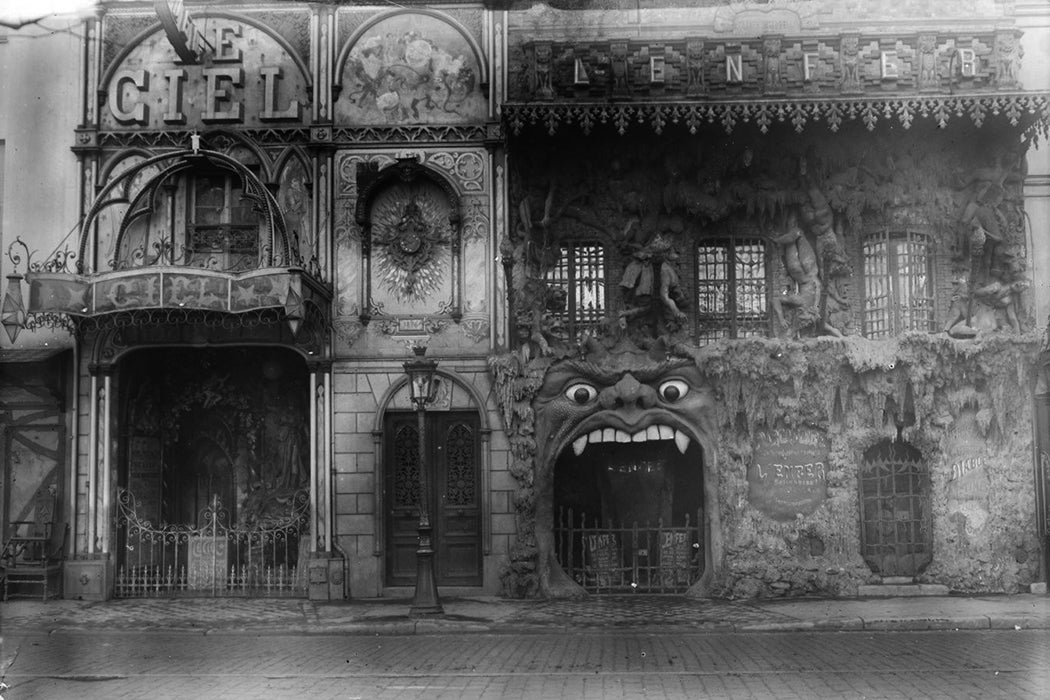 In a single night, a tourist in 1890s Paris could experience Heaven and Hell. They were located conveniently in adjoining buildings: the Cabaret du Ciel and the Cabaret de l’Enfer, one announcing its presence with cool blue lights and elegant archways, the other with fiery blazes and an entrance in the shape of a grotesque, gaping maw. Both were founded by the same man, like a macabre, metaphysical Walt Disney.

Heaven and Hell adjoining might be odd from the standpoint of theology, but it was sound from a business perspective: who could resist visiting both? As the writer Jules Claretie remarked, they put “Dante’s poem within walking distance.”

The waiters were dressed as pall-bearers and addressed the guests as “macchabees,” Parisian slang for corpses found in the river Seine.

Just a few blocks down the street stood the Cabaret du Néant. Rather than offering a glimpse beyond the veil, the “Cabaret of Nothingness” celebrated death itself. It announced its presence with green lanterns that cast a corpse-like pallor on the faces of passersby. Its facade was plain and black, with barred shutters.

Inside, a chandelier made from human bones provided dim, flickering light. Coffins served as tables, and pictures of gruesome battles and executions hung on the walls. The waiters were dressed as pall-bearers and addressed the guests as “macchabees,” Parisian slang for corpses found in the river Seine. If you ordered a drink, you’d be offered “a microbe of Asiatic cholera,” or “a sample of our consumption germ.”

All this only served to set the stage for the performance to follow. A young man would enter, dressed in black, and deliver a speech on the agonies and horrors of death. As he pointed to the pictures around the room, each would start to glow, and the subjects within them would transform into skeletons.

Next, the guests would be led into a dark inner room, where a pretty young woman stood in a coffin against the wall, dressed in a white shroud:

Soon it was evident that she was very much alive, for she smiled and looked at us saucily. But that was not for long… Her face slowly became white and rigid; her eyes sank; her lips tightened across her teeth; her cheeks took on the hollowness of death—she was dead. But it did not end with that. From white the face slowly grew livid… then purplish black… the eyes visibly shrank away into their greenish-yellow sockets… Slowly the hair fell away… The nose melted away into a purple putrid spot. The whole face became a semi-liquid mass of corruption. Presently all this had disappeared, and a gleaming skull shown where so recently had been the handsome face of a woman; naked teeth grinned inanely and savagely where rose lips had so recently smiled.

This account comes from William Chambers Morris’ 1899 Bohemian Paris of Today. He was indulging in one of life’s most delicious pleasures: showing off his chic city to a square, respectable out-of-town guest.

Appropriately enough, their visit to Death was followed by a trip to Hell (that is, the Cabaret de l’Enfer). To enter, they passed through the gaping, fanged mouth lit by glowing embers:

A little red imp guarded the throat of the monster into whose mouth we had walked; he was cutting extraordinary capers, and made a great show of stirring the fires. The red imp opened the imitation heavy metal door for our passage into the interior, crying—“Ah, ah, ah! still they come! Oh, how they will roast!”

Near us was suspended a caldron over a fire, and hopping within it were half a dozen devil musicians, male and female, playing a selection from “Faust” on stringed instruments, while red imps stood by, prodding with red-hot irons those who lagged in their performance.

The room seemed to be hewn out of subterranean rock. Streams of molten gold and silver trickled from the walls, and here and there, thunderous, sulfurous volcano-blasts burst from crevices in the stone.

One of the imps came to take our order; it was for three coffees, black, with cognac; and this was how he shrieked the order:

“Three seething bumpers of molten sins, with a dash of brimstone intensifier!” Then, when he had brought it, “This will season your intestines, and render them invulnerable, for a time at least, to the tortures of melted iron that will soon be poured down your throats.” The glasses glowed with a phosphorescent light.

The Cabaret du Ciel was perhaps the least convincing of the three. One British visitor, Trevor Greenwood, described the place as “the very essence of tawdriness.” Gloomy organ music resounded through the room. Blue sky and clouds adorned the ceiling; gilded vases and candelabras filled the space below. Waiters with lacy wings and lopsided halos moved through the crowds, distributing “sparkling draughts of heaven’s own brew.” Occasionally, a stubbly “St. Peter” would stick his head through a hole in the sky to flick the drinkers below him with “holy water,” and ladies with cockeyed angel wings swooped over the tables on wires.

Finally, the visitors were offered the chance to “become angels” themselves. As Greenwood recounts, “a Yank soldier was invited behind the scenes, and he went… And then we saw the Yank—revolving gaily amongst the clouds—with a lovely pair of wings to his shoulders—and blissfully smoking a cigarette.”

These entertainments were right at home in the Pigalle neighborhood of Montmartre. The place was infamous for its cabarets, brothels, and anything-goes entertainment. As well as innumerable nightclubs, it was home to Le Théâtre du Grand-Guignol, whose name has since come to stand for spectacles of gore and guts. Rumor had it that the theater was obliged to have a doctor on staff at all times, since so many patrons would vomit or pass out from the shock of what they saw on stage.

How did Montmartre develop this culture? The neighborhood was far from the center of town, and built into a steep hill; the inconvenience made it cheap. Low-cost living attracted artists (among them such figures as Vincent Van Gogh, Henri Toulouse-Lautrec, and Edgar Degas). Some formed clubs where they could perform, discuss, and develop their own artistic sensibilities. Perhaps the most iconic of these was the Chat Noir, now considered the first modern cabaret. (Even if you haven’t heard of the club, I’m sure you’ve seen the poster.)

What happened next is a familiar story: the cultural cachet of the artists attracted the middle and upper classes, slowly changing the culture of the neighborhood from a scrappy bohemian enclave to a gentrified tourist trap.

The artists were well aware of the shift. As the Chat Noir became popular outside its artistic audience, the artists took the opportunity to “épater le bourgeois”—shock the upper class—with songs about the horrors of poverty. The atmosphere at Le Mirliton, one of Chat Noir’s competitors, was even more vehement: the poet-proprietor Aristide Bruant was famous for vigorously insulting the respectable visitors who came down to the cafe for a taste of the bohemian life. These outbursts quickly became one of the main attractions—a smack of authenticity for wealthy visitors.

The stage was set. The idea of the cabaret as a venue for shock-value entertainment was in the air; all it needed was for someone to make it commercial. Enter the cabarets of Heaven, Hell, and Death, promising the most shocking of all shock tourism: a visit beyond the grave.

'How To Be Happy in Paris': Mina Loy and the Transvaluation of the Body
By: Andrew Michael Roberts
The Cambridge Quarterly, Vol. 27, No. 2 (1998), pp. 129-147
Oxford University Press
THE CABARET DU NEANT
Scientific American, Vol. 74, No. 10 (MARCH 7, 1896), pp. 152-153
Scientific American, a division of Nature America, Inc.
Suburban Attractions
By: Edwin Carels
Afterall: A Journal of Art, Context and Enquiry, Issue 18 (Summer 2008), pp. 64-73
The University of Chicago Press on behalf of Central Saint Martins College of Art and Design, University of the Arts London
The Origins of the "Cabaret Artistique"
By: John Houchin
The Drama Review: TDR, Vol. 28, No. 1, French Theatre (Spring, 1984), pp. 5-14
Cambridge University Press