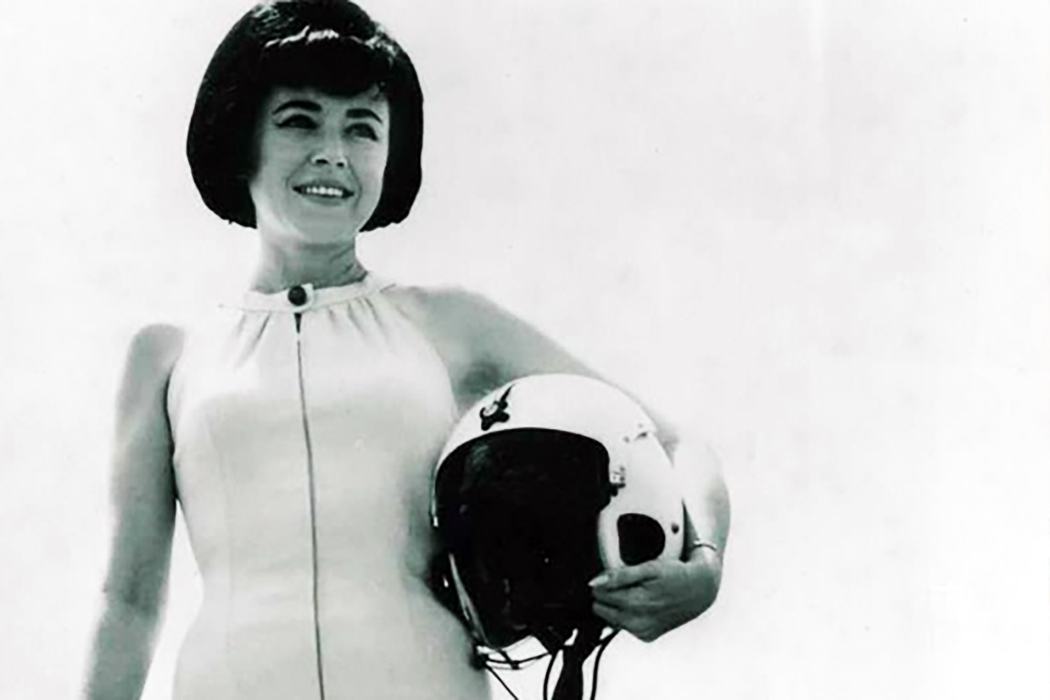 In 1964, a woman named Geraldine Sloan toured the U.S. as a spokesperson for DuPont, the chemical giant. Sloan, as the scholar Regina Lee Blaszczyk writes in an article for the Business History Review, sported a custom-designed wardrobe made of the synthetic fabric Lycra, a stretchy spandex. Her mission was pretty simple: Highlight the “easy comfort and flexibility” of the fabric.

But Sloan wasn’t any ordinary model. She was a licensed pilot, and owned her own company that provided aviation services for high-profile clients like Texas Instruments. Maybe most impressively, she was a member of Mercury 13, the group of women to whom NASA gave the same training as astronauts. Scientists were curious to see how space affected the fairer sex, but didn’t want any actual women in orbit.

The Lycra clothes, created by the successful menswear designer John Weitz, were made to show off how synthetic garments could be both fashion-forward and flexible for the workingwoman. The idea was to communicate that fabrics with “give” could be versatile enough for both work and leisure. As Sloan put it: “The most important attributes required to lead the busy life as mother, homemaker, pilot, businesswoman, painter, gardener, and any other activities are versatility and adaptability—qualities inherent in most busy, active women of today.”

Fifty-three years later, I read this statement and wonder one thing: How many pieces of her custom Lycra wardrobe did Sloan ruin by sweating through them?

Sloan was a pioneer, a pilot, a businesswoman, and a mother; I am none of those things, and this summer I will destroy no fewer than five blouses by sweating through their artificial fibers. As assuredly as the half-sun of Manhattanhenge will mark the grid of this island, I will walk around the steamy city with crescent imprints of sweat visible.

According to the design historian Jeffrey L. Meikle’s book American Plastic, in 1938, DuPont announced the “first man-made organic textile fiber”—nylon. As DuPont put it, nylon was one of the most important developments in all of industrial research. The company had engineered it to be as strong as steel but as fine as the threads in a spider’s web.

What was this magical fiber to be used for? Women’s hosiery. Up until then, women wore silk stockings, which were more delicate and easier to snag. At that point in DuPont’s nylon-promoting speech, Meikle writes, a woman began clapping, and the whole audience joined in.

Nylon became DuPont’s most profitable product and earned the company more than $4 billion between 1940 and 1967. It quickly became an item women didn’t want to live without. However, two months after Pearl Harbor, in February 1942, DuPont cut off women’s supply of nylon when it converted to military production, Meikle writes.

Synthetic fabrics like Lycra symbolized the U.S.’s emergence from years of depression and war and contrasted with Communist scarcity.

Military parachutes had, up until that point, been made of silk, but because the U.S. silk supply came from enemy Japan, DuPont started experimenting with nylon as a substitute. Women again played an important role in this part of the synthetic fiber’s history: On June 6, 1942, 24-year-old parachute rigger Adeline Gray made history when she jumped out of an airplane over a field in Connecticut to test the first nylon parachute.

After World War II, the synthetic-fiber market expanded as Americans experienced unheard-of economic growth. According to Blaszczyk, the gross national product more than quadrupled between 1946 and 1970, and the median family income doubled during that same time period. Simply put, people had more money to spend, and with factories pumping out a new assortment of clothing and appliances, more stuff on which to spend it. These items symbolized the country’s emergence from years of depression and war and contrasted with Communist scarcity.

Americans weren’t buying just the same old products off the assembly lines. The goods factories produced in these postwar years were described as “wonders of chemistry” and “miracles of technology” that saved time in the home: frozen food; clothes washers and dryers; and synthetic fabric. These pieces weren’t simply good-looking, Blaszczyk writes—they were “high performance.” They were easy to care for, they didn’t shrink or bleed dye, and they were wrinkle resistant. A Good Housekeeping article from 1958 reported that nylon curtains could be washed, dried, and hung back up over the window in 51 minutes.

At the same time Americans were embracing high-performance goods, they were turning away from the structured clothes and cluttered home decor of their childhoods. Hollywood exposed Americans to casual living, promoting California as a land of easy-breezy barbecues and beaches—and the forgiving and stretchy clothes to go with them. This vision of leisure spread all the way to the Midwest (and to the wallets of the people in the Midwest), furthering the idea that inexpensive, comfortable, easy-to-care-for clothes were fine everyday wear. This preference for dressing casually and comfortably continued into the 1960s and 70s, when the number of women in the workforce rose.

And here is where it gets really interesting: Using census data from 1960 to 1970, a Notre Dame study published in Labour Economics analyzed the relationship between married women owning household appliances and entering the workforce. It found that the rates of women owning appliances like washers, dryers, and freezers and working outside the home rose simultaneously. Working married women increased from 33 percent to 43 percent of the population; owning appliances from 11 percent to 28 percent. Had these household machines freed women from the confines of domesticity?

Two years before Geraldine Sloan modeled for DuPont, in July 1962, the U.S. House of Representatives formed a special subcommittee on the selection of astronauts to determine whether NASA discriminated against women. As the feminist historian Marie Lathers writes in Feminist Studies, the subcommittee found that “the present qualifications are such that there appear to be no women who are qualified” for the NASA program.

Except that there were actually more than a dozen who were.

In 1959, when the first class of astronauts, the all-male Mercury 7 group, was announced, Randolph Lovelace, the doctor who designed their medical testing, also planned to test women. He thought they might have some advantages over men. They weighed less, for example, so they were lighter cargo, and they didn’t need as much food.

Valentina Tereshkova, a Soviet cosmonaut, became the first woman in space just a year after a U.S. subcommittee hearing on women in space, in 1963.

As the journalist Martha Ackmann writes in her book The Mercury 13, Lovelace wondered whether “women could measure up to the same demanding physical standard that the Mercury astronauts established. Were women physically weaker, less resilient, less capable of dealing with isolation, stress, and danger?”

There was a rumor the Soviet Union was training women cosmonauts, even considering having one pilot their first orbital space flight. The first human mission was going to happen any day, and the U.S. didn’t want to miss the opportunity to beat the Soviet Union.

The Mercury 13 women completed the first phase of testing at the Lovelace Research Center in New Mexico, and then…nothing. They were shut out of the program.

During the hearing, John Glenn, only five months after becoming the first American to orbit Earth in the tiny space capsule Friendship 7, argued that women couldn’t be astronauts because military pilots were the most qualified candidates. Because the military wouldn’t lift restrictions on women flying combat missions until 1993, women were effectively barred from the space program. Ditto the bachelor’s degree in engineering that was also a qualification (though Glenn didn’t have one when he was accepted into the program).

Lathers writes that Glenn’s speech bore a bit of a sting: The word “engineering” was used to describe “household management techniques, ones that involved housewives’ dependence on gadgets or aids produced by technology.” Women were shut out from earning engineering degrees, but when it came to home economics, the expectation was that they would master the latest gizmos to make a household run smoothly. This type of “engineering” was also discussed in the subcommittee hearings. Lathers writes:

[M]odern household gadgets [were referred to] as evidence that women were ready to go into space, not because they were proficient at using the gadgets, but because the machines afforded them the time to get ready to go… Vacuum cleaners, coffee makers, and refrigerators were thought to have lessened the time women worked in domestic space and thus freed them to go into outer space.

No matter—the U.S. wouldn’t launch a woman into space until 1983, when Sally Ride spent six days aboard the Challenger. The Soviet cosmonaut Valentina Tereshkova—an amateur parachutist with no pilot experience—beat the Americans by 20 years. She became the first woman in space just a year after the subcommittee hearing, in June 1963, when she spent three days orbiting Earth 48 times.

It would be oversimplifying to say that women were able to enter the workforce—much less that they were ready to blast off into space—because they had less to do at home. There was still the same amount to do; it was just a little easier to accomplish. But innovations in the home might have made it a little easier for our forebears to blaze trails in the office, because it’s clear that, even today, women do most of the household chores. Our great-great-grandmothers had to heat flatirons on the stove and use them to press clothes. The electric iron was indeed a miracle. Wrinkle-free fabric? O, she is a merciful God.

Synthetic fabrics can be smothering and skunky-smelling. However, I spend zero time ironing my clothes, and they still look OK. I do not wash them with any special care. Twice a month, I stuff everything in my dirty clothes hamper into a sack, drop it off at the laundry down the block, and pick it up the next day. Actually, I lied—my husband does that. And does the guy who runs the laundry separate my whites from my colors? No, I’m positive that all my clothes are washed with strangers’ underwear and dirty towels, and they still come back looking just fine. And I’m grateful: If synthetics were good enough for a would-be woman astronaut, they’re good enough for me.