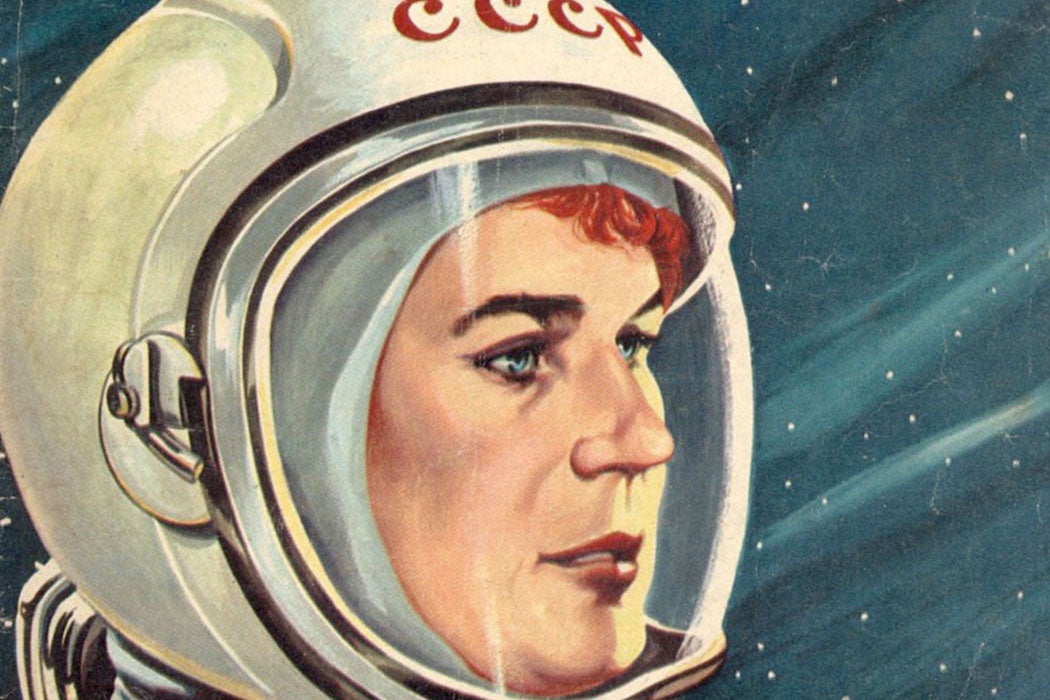 The first woman in space was the cosmonaut Valentina Tereshkova, who launched on June 16th, 1963. Her craft, Vostok 6, orbited the planet forty-eight times over three days. Tereshkova’s achievement was one of great pride and propaganda value for the U.S.S.R.—and confusion and consternation for the U.S.A.

For one thing, she didn’t fit American’s Cold War-era stereotypes of Soviet women. One such stereotype, as historian Robert L. Griswold reveals, was the “graceless, shapeless, and sexless” Russian working class woman. Many Americans imagined female Soviets as miserable and shabby, suffering from bad clothes and makeup, thanks to their inferior form of government. According to Griswold, by the late 1950s, the “American conception of Soviet working class femininity became a way to reassert the boundaries of proper womanhood” which, after World War II in the US, no longer had a place for “Rosie the Riveter.”

The Chicago Tribune dubbed Valentina Tereshkova the “Russian blonde in space,” even though she wasn’t blonde.

Then there was the stereotype of the apolitical matron, informed by Nina Khrushcheva, partner of Nikita Khruschev. Practically everybody liked “Mrs. K.” when she toured the U.S. in 1959. Although she was in fact “a revolutionary in her own right,” in the eyes of the American media she “became a kind of world grandmother who focused on her family and had little interest in Kremlin intrigue.” Griswold writes that in this case, conservative Baby Boomers’ maternal ideology was more powerful than anti-Communism.

This all changed when Tereshkova went into space. Suddenly a new stereotype emerged on the American cultural front: Soviet professional women were “female physicians in lab coats, women engineers with their slide rules, even a young cosmonaut in her spaceship.”

The twenty-six year-old Tereshkova had, after all, “travelled further than the entire American male astronaut corps combined.” The American media fixated, unsurprisingly, on her sex appeal. The Chicago Tribune dubbed her the “Russian blonde in space,” even though she wasn’t blonde. She was said to wear a perfume called Red Moscow, and was compared favorably to Ingrid Bergman.

According to Griswold, Tereshkova

came to symbolize the challenge Soviet women posed to America’s conventional assumptions about gender and, more fundamentally, the threat the Soviet Union posed to the survival of the United States itself.

Valentina Tereshkova’s space mission forced Americans to recognize they had “an opponent who tapped their [women’s] talents in ways that strengthened the nation.” Clearly, if the space race was going to be won, Americans would have think of women in the sciences. A 1957 National Manpower Council’s report, Womanpower, argued that to compete in the sciences, the U.S. would have to “make better use of women’s minds.” American woman pilots who advocated for women in space at the time, like Jerri Cobb and Jane Hart, were excited for Tereshkova and disappointed in their own country.

NASA and the U.S. Air Force were not impressed. Some in those ranks compared Tereshkova to the chimps Americans had already sent into orbit. Griswold writes that “An unnamed NASA spokesman had a more visceral reaction. The talk of putting an American women in space ‘makes me sick to my stomach.” It took a long time to overcome American sexism, the Cold War or no. The first American woman in space wouldn’t get there until two decades after Tereshkova.

One Response to “Valentina Tereshkova and the American Imagination”