Sudan’s Revolution and the Geopolitics of Human Rights

Sudan’s former president Omar al-Bashir was indicted by the International Criminal Court on charges of war crimes and genocide. Why isn’t he on trial? 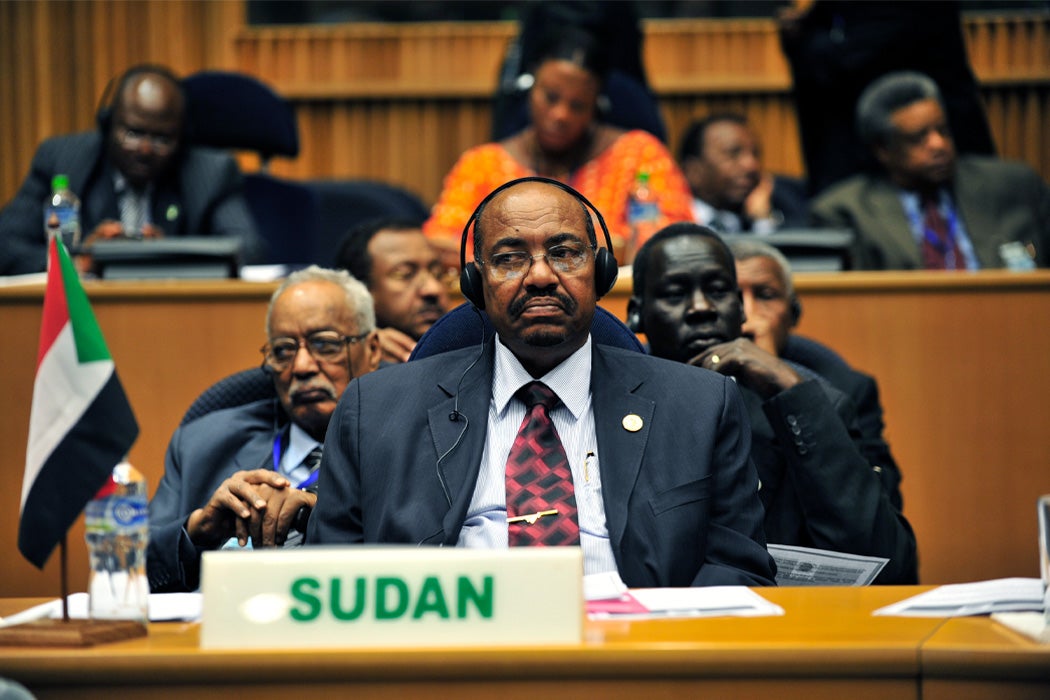 Sudanese Army leaders removed President Omar al-Bashir from power in a coup d’etat on April 11, 2019. This move came after five months of mass demonstrations in the major cities of the country. The demonstrations were sparked by sharp reductions in the bread subsidy but sustained by widespread resentment toward government corruption and the country’s decades of civil war in Darfur and the region that is today South Sudan.

Al-Bashir is the latest dictator to fall since the start of the regional unrest in 2011 in the so-called “Arab Spring.” The hopeful momentum of those movements has seemed crushed in recent years by violent repression in large states such as Egypt, and brutal civil war in Syria. Early in April 2019, however, large-scale protests resulted in the resignation of Algeria’s 20-year president Abdulaziz Bouteflika, who had sought a fifth term. These events in Algeria and Sudan signal that the ideology and organizational tactics of youthful mass democracy movements has survived.

Economic and strategic concerns prevent many countries from taking sides, particularly when the outcome of social revolutions remain in question.

All these revolutions have posed a diplomatic dilemma for both world superpowers and regional neighbors. Most publicly renounce the autocrats’ human rights violations that have prompted such domestic protests. But economic and strategic concerns prevent many countries from taking sides, particularly when the outcome of social revolutions remain in question. Indeed, many counterrevolutions have worked United States support for the opposition (such as recognition of the Egyptian Muslim Brotherhood in 2012) into conspiracy theories playing on the public’s postcolonial anxieties that superpowers are infringing their national sovereignty.

One of the unique circumstances of Sudan’s current transition is that al-Bashir was indicted by the International Criminal Court in 2008 on charges of war crimes and crimes against humanity and in 2010 on genocide for the conflict in Darfur. Evolving from international tribunals such as the Nuremburg Trials, the ICC is only twenty-one years old, created formalize the prosecution of 1990s genocides, such as the conflicts in Bosnia and Rwanda. Human Rights scholar Kurt Mills provides a comprehensive analysis of the process by which Omar al Bashir became the first sitting president in the world indicted by the ICC.

While the ICC issued charges against non-state actors such as Joseph Kony without incident, the decision to pursue Omar al-Bashir sparked a diplomatic dispute between the African Union (AU) and the ICC. AU is the premier continental diplomatic organization, created twenty-one years ago with a mandate of “non-indifference”—meaning states should interfere to stop wars and genocides. Thirty-three African states duly ratified the Rome Statute recognizing individual responsibility for war crimes and the court’s jurisdiction.

Yet Bashir’s indictment met strong opposition from many delegates to the AU in 2008. All of the ongoing ICC cases involve Africans, and African states exercise weak power in the UN framework. Some have, therefore, depicted the indictment as a new form of neocolonial European power on the continent in the guise of human rights enforcement.

The Sudanese generals who staged the coup are currently themselves jockeying for position in the new political order. Now that al-Bashir is gone, the AU has demanded that they hand power to a civilian government rather than waiting two years as they intend. But the one thing the generals have categorically refused to do is to permit the extradition of Omar al-Bashir for trial at the ICC. It will be remarkable to see what the AU or UN could do to persuade them to compromise on this aspect of their perceived sovereignty.

"Bashir is Dividing Us": Africa and the International Criminal Court
By: Kurt Mills
Human Rights Quarterly, Vol. 34, No. 2 (May 2012), pp. 404-447
The Johns Hopkins University Press

Why is the U.S. Military Occupying Bases Across Africa?