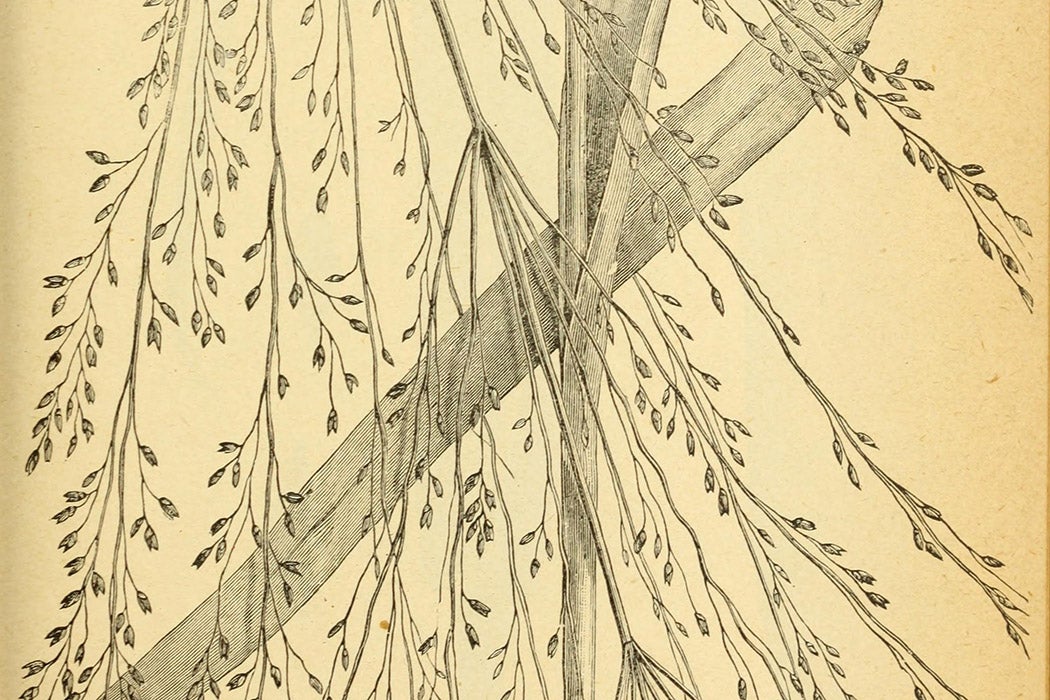 While sugarcane has defined Caribbean islands since the onset of European settler colonization, a little-known African species, guinea grass, has invaded sugar plantations from within. Cultivated to intensify sugar production, guinea grass ironically became a weed of the plantations while providing material and spiritual resources to enslaved and marooned Africans and their descendants. Today, as Caribbean sugar cultivation is shrinking, guinea grass, along with other imported African pasture grasses, is taking over the spaces this industry has left behind.

In some respects, sugar and guinea grass are opposites. While sugarcane was imported from Austronesia, guinea grass hails from the western coast of Africa. Sugar was the principal crop of many Caribbean plantations; guinea grass was imported as fodder for the oxen that labored in the fields and for the cattle that fed the planters. James Parsons has indicated that the grass was originally introduced to the West Indies in the seventeenth century, probably first to Barbados via a slave ship and then onto Jamaica and the other islands of the archipelago. Some reports claim that it was used as a crude substitute for bedding on ships that brought kidnapped Africans to the Americas. A 1707 account by Hans Sloane, whose collections would form the core of the British Museum, describes the grass (then known as “Scotch grass”) as widespread in Barbados and Jamaica:

[P]lanted in moist Ground all over the Island for Provision for Cattle, but grows wild, as I was inform’d, at Wague water, or Agua alta in the North side, and in that part of Barbadoes called Scotland, whence the name. After its being found very useful in Barbados, and had been there for some time, it was brought hither, and is now all over the Island in the moister Land by River sides, planted after the manner of Sugar Canes, by burying the Culmus with a Joint, which strikes Root, and seldom misses to prosper, and to feed and fatten extremely Cattle of all sorts, as well Cows and Oxen for the Market, as Horses and Cattle for Teams and Riding.

Sloane saw guinea grass as a complement rather than a competitor to cane. The imported grass was celebrated by eighteenth- and nineteenth-century planters for its high grazing quality. Bryan Edwards sang its praises in Jamaica:, writing that it

may be considered as next to the sugar-cane, in point of importance; as most of the grazing and breeding farms or pens throughout the island were originally created, and are still supported, chiefly by means of this invaluable herbage.

For Edwards, guinea grass had an almost equal status to sugar cane because it could feed “the plenty of horned cattle both for the butcher and planter.” Because foodstuffs were expensive to import for the early colonists, the ability to feed domestic cattle was a boon to Jamaica’s economy.

One observer in New Granada was so enthusiastic as to argue that whoever had introduced the plant deserved a statue “as high as New York’s Statue of Liberty.”

By 1786, the African grass had become naturalized in Guadeloupe, and, by 1813, it had reached Mississippi, writes Parsons. It spread widely throughout Central and South America, where it was celebrated for providing nutrition to livestock and making otherwise unprofitable land arable. Indeed, one observer in New Granada (modern-day Colombia) was so enthusiastic as to argue that whoever had introduced the plant deserved a statue “as high as New York’s Statue of Liberty” (translations are by the author except where otherwise noted).

In Cuba, the grass appears in an 1816 report of José Antonio de la Ossa, the first director of the Botanical Garden of Havana, who wrote: “It is an abundant and convenient pasture grass, because it multiplies its stalks in the same way as Sugar cane[.]”

Like Sloane and Edwards, Ossa compares guinea grass to sugarcane. The two foreign grasses seemed to them similar in morphology and function, because they both grew abundantly in moist Caribbean soils and promoted the economic development of the islands’ cash crop societies. In fact, guinea grass is almost indistinguishable in form from sugarcane before it flowers, according to the authors of The World’s Worst Weeds. While sugar was introduced to Cuba long before guinea grass, it was guinea grass that allowed for the intensification of Cuban sugar cultivation with large herds of oxen.

Yet something strange happened in the history of this ostensibly symbiotic relationship. Although guinea grass was meant to support the sugar economy by feeding its beasts of burden, ironically, it became a virulent weed to the sugarcane plants. By 1977, guinea grass was rated the number one weed to sugarcane in Cuba. In 2012, the journal of the National Botanical Garden of Cuba (Revista del Jardín Botánico Nacional) listed it as one of the top 100 most noxious weeds on the island and an invasive species of greatest concern.

In this way, the two imported grasses became stalky antagonists in the daily competition for light, water, and soil nutrients. Their cultural meanings, however, had long since diverged. If sugarcane supported the economic interests of European planters, guinea grass was appropriated by enslaved and marooned Africans across the Caribbean for practical and religious purposes. Diasporic Africans in the Virgin Islands used the dried grass to make masquerade costumes for Carnival and other festivals. In Cuba, priests used it to make omiero, the holy water of the Afro-Cuban Reglá de Ochá religion. Moreover, some of the enslaved canecutters used an ancestral West African technique to thatch their mud huts with guinea grass. Working in forced intimacy with the cane, they found an ally in the invasive grass.

In fact, the famed maroon Esteban Montejo described using this method of thatching during his escape from a Cuban sugar plantation in the late nineteenth century:

I spent several days walking about in no particular direction. I had never left the plantation before. I walked uphill, downhill, in every direction. I know I got to a farm near the Siguanea, where I was forced to rest. My feet were blistered and my hands were swollen and festering. I camped under a tree. I made myself a shelter of guinea grass in a few hours and I stayed there four or five days. (Translation by Nick Hill, revised for botanical accuracy)

Montejo appropriates the same plant that served as bedding on Atlantic slave ships to craft a shelter. In this sense, the intergenerational memory of the Middle Passage is embedded in his flight from slavery. But guinea grass, like Montejo himself, is a maroon from the plantation. Once confined to pastures, it has escaped their bounds.

Guinea grass has continued to take on new meanings for Caribbean writers in the twentieth and twenty-first centuries. In Alejandro Aguilar’s 1997 short story “Landscape of Clay,” the cadets at a Cuban military academy in the early years of the Revolution are forced to “cu[t] down the plants, amputating their roots.” In the context of the story, the invasive guinea grass is likened to forbidden acts of homosexuality. The untamed grass, like the cadets’ expressions of sexuality, subverts the rigid structure of the institution.

Likewise, the storyteller in the 2002 play In the Time of the Revolution by the Guadeloupean writer Maryse Condé bemoans the fact that “people’s dreams are not made to grow freely like guinea grass on the banks and highways. Some people try to pull them up, to mow them down, to dry them out, to burn them and see them go up in smoke.” Guinea grass, Condé suggests, is what dreams should be, free from the threat of uprooting.

While guinea grass can blend into Caribbean landscapes, these texts register its cultural and political resonance. In undermining the economic ambitions of the plantation system, guinea grass has come to represent acts of subversion, fugitivity, autonomy, and sabotage. The conversion of guinea grass from livestock fodder into aggressive invader, from plantation boon to insurgent from within, suggests something larger about the mutability of plants within foreign cultural contexts. Imported species take on new meanings as their uses are discovered or their harmful effects are detected. Perhaps we should take a note from Regla de Ochá priests, who believe that plants are neither good nor bad in and of themselves. As Lydia Cabrera reports of the religion’s foragers, one has to acquaint oneself with the plants’ caprices, their “psychology,” to learn to use their magical powers. Does guinea grass deserve a new Statue of Liberty? That much remains to be seen.