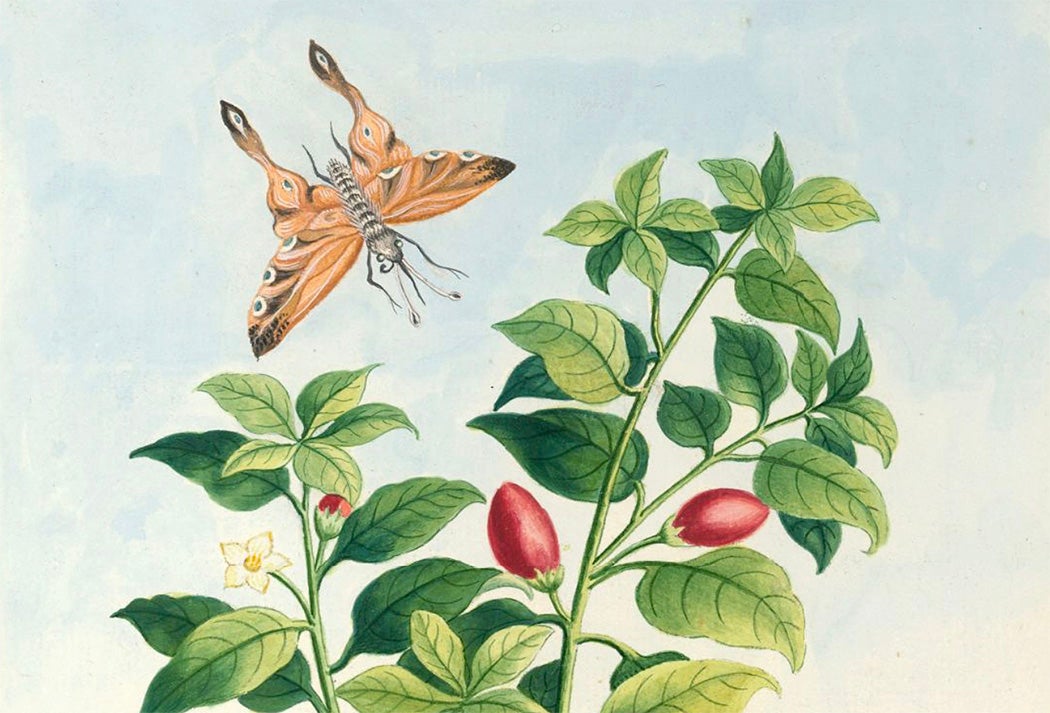 Celebrity interviewer Sean Evans has a unique hook for his show Hot Ones. Over the course of the interview, he and his guest eat ten chicken wings dipped in hot sauce. The first wing starts off at a mild 2,200 Scoville units, but the wings become increasingly hotter until they reach more than 2,000,000 Scoville units. Among Evans’s guests, reactions range from the stony-faced chili-pepper veterans to the watering eyes, runny noses, and panting breaths of those less accustomed to the spice.

From their featured appearances in Hot Ones and chili-eating competitions to the countless recipes detailing their importance across food cultures, chili peppers occupy an unusual place in the food canon. Few foods so unpleasant at first encounter have been embraced so widely. In 1980, researchers Paul Rozin and Deborah Schiller studied how humans come to acquire a taste for chili peppers. They were especially interested in the plant because it doesn’t have the addictive properties of other “initially aversive” substances, such as coffee and tobacco. There’s no long-term danger in eating chilies, and Rozin and Schiller propose that eating them mimics thrill-seeking activities without involving actual risk. Eating chili peppers, they suggest, might not be that different from riding a roller coaster.

Chilies are now such important features of cuisines across cultures that many assume these plants to be native to their respective country.

Whatever the reason, chili peppers have become a staple of diets in North and South America, Africa, Asia, the Pacific Islands, and parts of Europe. We eat them whole or mashed into pastes and oils, smoked and dried or fresh, in dishes ranging from curries to salads. Chilies are the base of condiments like hot sauce and paprika, and even the leaves can be used in cooking. Like many other crops, they are mass-produced on large farms to support the industry that has grown up around them. In their original usage among Indigenous Americans and even following their early spread worldwide, though, chili peppers were cultivated in kitchen gardens, a humble beginning for a plant that would be turned into a cash crop. In fact, chilies are now such important features of cuisines across cultures that many assume these plants to be native to their respective country. So how did chili peppers manage to join the ranks of the most popular spices in the world?

Though they now enjoy a global range, chili peppers were originally domesticated in Central and South America. Japanese shishito peppers, bird’s eye peppers, bonnet peppers, cayenne peppers, and bell peppers are each characteristic of different culinary traditions. Still, all belong to the Capsicum genus and have their roots in the Americas. Wild chilies grow their fruits upright, attracting birds to spread their seeds. Through the process of domestication, the bright red pods began to hang down from the branches, becoming more obscured behind the leaves. They also remain on the stem longer, so that humans can pick them before they fall to the ground. From the peppers’ early habitats in the central Andes, indigenous populations expanded their range to the coasts of South America, across the Caribbean islands, and as far north as present-day Mexico and southern Texas. According to archaeological records, chilies grew mostly in gardens close to the home rather than in larger and more distant fields, where maize, beans, and squash were cultivated together.

Called chilli in Nahuatl, these plants held religious significance to the Nahua people. Their ritual use is documented in Bernardino de Sahagun’s Historia General de las Cosas de Nueva España [General History of Things of New Spain], a sixteenth-century encyclopedic account of Aztec culture written in Nahua, Spanish, and Latin, also known as the Florentine Codex. Chilies are mentioned throughout the Codex in rituals used to bring luck to merchants and as a staple in meal preparation. After a slow day at work, cloth sellers would slip chili peppers between two pieces of cloth to improve their sales the following day. Sahagún also records the inclusion of chilies in prayer to Tlaloc, the Aztec god of rain.

Chilies were also valued in the Caribbean islands, where the Taíno people cultivated some of the hottest varieties of the plant. They called them axi, a word which remains one of the common names for the plant. When Christopher Columbus encountered the chilies during his first voyage to the Americas, he thought they resembled black pepper (Piper nigrum L.), a mildly spicy plant originating from India. The two plants share no significant genetic relationship, but the name stuck, becoming the first in a series of historic misunderstandings that obscure the chili pepper’s origins.

In the century following Columbus’s voyage, chilies spread like wildfire across the world. As the Portuguese expanded their empire along the west coast of Africa, they became the primary vector of chili pepper spread. Each new culture introduced to chili peppers adopted them to their existing food traditions. In West Africa, “grains of paradise,” also known as “melegueta peppers,” were commonly used to add spice to cooking, so chili peppers quickly took that niche. In Brazil, enslaved people with West African roots gave chilies a name close to the spice with which they were familiar, calling them “malagueta.”

Portuguese ships were also responsible for introducing chilies to India around 1542, nearly half a century after Vasco da Gama had sailed around the Cape of Good Hope, establishing a Portuguese sea route to Asia. One of the names for chili peppers in Goa was “Pernambuco pepper,” referring to the region of Brazil that Portugal began colonizing at the beginning of the sixteenth century. Chilies spread quickly through India, which now ranks as the world’s top producer of dried chili peppers. It was from there, via land routes, that they found foothold as a culinary ingredient in Europe.

The palates of the European elite categorized exceptionally flavorful foods as “violent,” so they were among the last to incorporate chilies into their cuisines. (Hungary was one exception, developing paprika, an essential ingredient in the traditional goulash—as did Turkey—from the chili peppers that had arrived through India.) The speed of the plant’s diffusion to other parts of the world meant that many Europeans mistook its origins. In his 1542 herbal, German botanist Leonhardt Fuchs called chilies “Calicut peppers,” with reference to the city on the west coast of India; likewise, in The Herball, or, Generall Historie of Plantes (1636), John Gerard identified them as “Indian peppers” that entered Europe from the East. This confusion, which perpetuated Columbus’s misnaming, persists even today.

Written records indicate that chili peppers had reached the interior of China by 1592, but as food historian Brian Dott points out, their actual date of introduction is a little less clear. As in the case of Europe, the tastes of the Chinese elite, trained in the Confucian ideals, rejected chili peppers for their heat and pungency. Unlike other American crops, like tobacco and corn, they held little commercial or nutritional appeal for government officials. Instead, chilies likely made landfall in China among the personal effects of merchant sailors who used their seeds as a condiment. Based on naming patterns, they came in from at least two points of entry along the coast.

By the time they were recorded in official gazetteers, chili peppers were widely available in the markets and home gardens of Chinese commoners. They appeared in these texts under names like “goat horn peppers,” which resonated with a farmer’s daily life. In contrast, elite ornamental varieties had fancy names such as “earth coral.” It wasn’t until the nineteenth century that elite reticence towards chili peppers diminished, and they became common in characteristic regional recipes.

The winding road toward acceptance in China is typical for this polarizing plant, for few foods elicit such strong reactions as chili peppers. Chilies rarely followed the top-down distribution patterns of more palatable cash crops. Instead, they first found a place among the most disenfranchised, claiming their place in small kitchen gardens to become entangled in larger human histories. The Dumbarton Oaks Plant Humanities Lab seeks to trace the meandering paths of plants like the chili pepper to explore their significance to those human histories and how they have helped shape them.