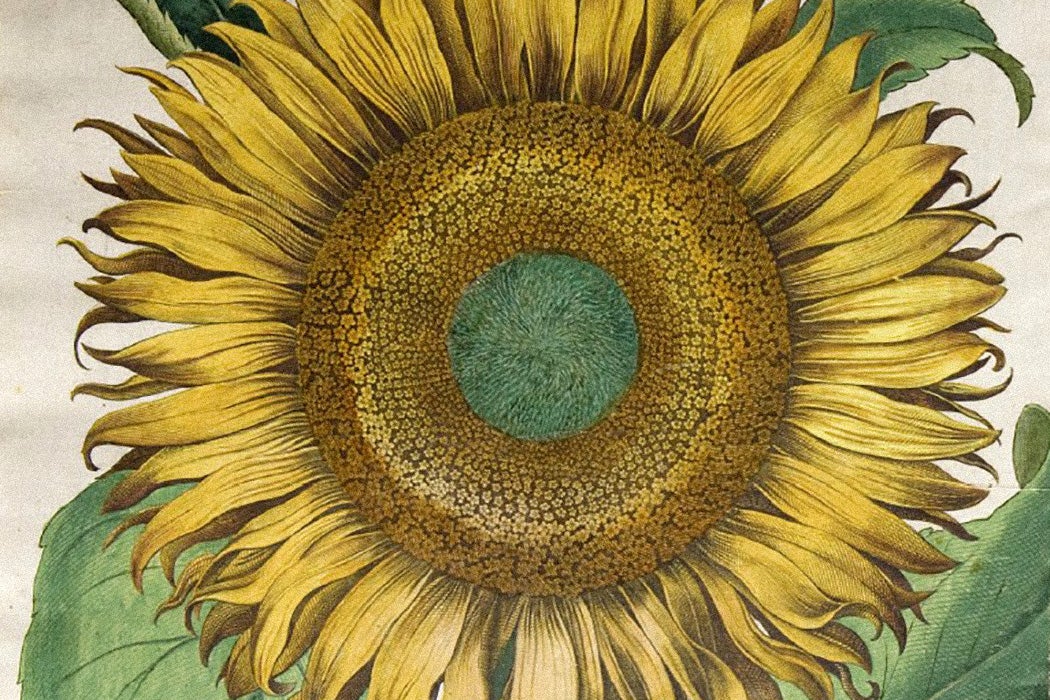 With the Russian invasion of Ukraine in February 2022, sunflowers suddenly appeared on the political landscape. The first lady of the United States, Jill Biden, wore a facemask with a sunflower embroidered on it as a token of her support for Ukraine; people protesting the war in different countries wielded real sunflowers; others added a sunflower emoji to their profiles on social media. Perhaps more famously, a video of a Ukrainian woman giving a handful of sunflower seeds to an armed Russian soldier went viral. “Take these seeds, so sunflowers grow when you die here,” she reportedly told him.

A few weeks after the invasion, the sunflower was back in the news, this time due to the shortage of sunflower oil that spiked prices across Europe. Indeed, the domesticated sunflower is an important oilseed crop (in 2021, approximately 328,000 metric tons of sunflower oil were consumed in the United States alone). And because Ukraine and Russia account for around 60 percent of the world’s total sunflower oil production, the war severely affected the global supply chain in this and other ways.

But how did the sunflower, a plant native to temperate North America, become Ukraine’s national symbol, as well as one of the backbones of its economy? The history of the sunflower is a history of mobility across boundaries and cultures, as well as an outstanding example of the multiple values that plants can hold, both economically and symbolically.

One could even argue that we are more familiar with sunflower imagery than with the actual plant.

The cultivated sunflower’s physical traits—its yellow flower head, large disk, and arresting height—are also salient. Because of its visual appeal, the sunflower has had a powerful presence in many cultural traditions as an ornamental plant, as well as an artist’s muse. One could even argue that we are more familiar with sunflower imagery than with the actual plant, thanks to well-known paintings like Vincent van Gogh’s 1888 Sunflowers.

Remarkably, these two histories of the sunflower—as a crop and an ornamental—are intertwined. The sunflower’s proliferation in European art since the late 1500s was, as detailed on the Plant Humanities Lab, “due partly to the aesthetic appeal of traits artificially selected to increase seed production—a single composite flower head with a large disk.” And the depiction, circulation, and distribution of sunflower imagery increased “due partly to the timing of its introduction to Europe just prior to the blossoming of a new genre of botanical treatise, called the florilegium (“collection of flowers”), in the early 1600s.” Prior to and during this time, the European colonization of North America also spurred the extraction of the plant from native lands and sparked colonial desire in Europe for collecting the flower and its imagery.

Helianthus annuus—helios meaning sun and anthos meaning flower—is an herbaceous plant that today includes wild, weed, and cultivated varieties. Charred seeds indicate that common sunflower was first domesticated at Hayes Shelter in central Tennessee more than 5,000 years ago. Prior to that period, Indigenous peoples likely brought the wild plant to their camps, where it became stabilized and, over time, cultivated to possess large flower heads—increasing seed production.

Early printed books can help us chart the domesticated sunflower’s migration from North America to Europe, as well as identify the practical reasons why it was cultivated and even cherished, some of which still stand today. Such books contained the earliest known visual representations of cultivated sunflowers that were produced by Europeans in the late 1560s. Illustrations, like one from Rembert Dodoens’s 1569 Florum et Coronarium, show tall plants with sun-shaped blooms, establishing a foundation for subsequent portrayals of the flower.

Sunflower aesthetics in Europe continued to blossom in the century that followed. Florilegia were crucial to this process because they celebrated flowers’ beauty and sometimes also fragrance rather than their use value. A sumptuous print of a domesticated sunflower shown life-size and published in the 1613 book Hortus Eystettensis, for example, became a model for representing Helianthus annuus. In fact, we can even interpret Flos Solis maior (“large flower of the sun”) as anticipating modern visual stereotypes for the plant, including the sunflower emoji now mobilized on social media platforms to show solidarity with Ukraine.

The European infatuation with the sunflower, both real and represented, was made even more visible in Anthony van Dyck’s circa 1632 Self-Portrait with a Sunflower, which shows the artist gesturing to a mature flower. The prominent display of the plant in the work can be read as an expression of Van Dyck’s loyalty to his patron, King Charles I of England, based in part on early modern sources that connect the flower to devotion.

As explained on the Plant Humanities Lab, “Europeans associated sunflowers with the human sentiments of loyalty and constancy because the plant’s heliotropic phase (growing toward the light) of development recalled how, in an ancient Greek myth, the sea nymph Clytie expressed her devotion to the sun god Helios.” As the story goes, Clytie tried unsuccessfully to win Helios’s affection and, after being spurned by him, trained her eyes on his chariot with such intensity that she wasted away. Consequently, Clytie was transformed into a heliotrope—a plant named for its flowers’ movement toward sunlight.

Myths such as this one might have nurtured the cultural assumption that the mature sunflower is heliotropic. However, the plant only moves in concert with the sun during an early phase of its development and once fully grown, faces the east.

As the plant moved from the Americas to Europe and gained aesthetic prominence, the sunflower arrived in Ukraine during the early 1600s. It was introduced by Peter the Great as part of his modernization program, and by the mid-1800s, it was already a well-established crop. People cultivated sunflowers mostly for their seeds, which they ate as snacks or crushed into oil. Still, although vegetable oils were used for centuries, they did not have significant economic importance until the early 1900s, with the greatest demand coming from the food industries, primarily to substitute or supplement animal fat.

But there might be ways in which sunflowers can attain still greater value. Today, as they are turned against the war and mobilized as symbols of peace, sunflowers also offer the potential to counter another form of human-generated violence––climate change. Researchers and eco-conscious entrepreneurs are investigating sunflower oil’s potential as a renewable energy source to replace fossil fuels and other vegetable oils. While results on this front are yet to come, acquainting ourselves with the long and rich histories of plants such as the sunflower can help us better understand how plants have nurtured us in so many ways. This mission animates the Dumbarton Oaks Plant Humanities Initiative, which seeks to engage with shifting and complex narratives to reimagine our relationship with the plant world.

Share Tweet Email Print
Have a correction or comment about this article?
Please contact us.
botanyflowersBulletin of the Art Institute of Chicago (1907–1951)GeographyPolicy PerspectivesProceedings of the American Philosophical SocietyThe American Biology TeacherThe Burlington Magazine 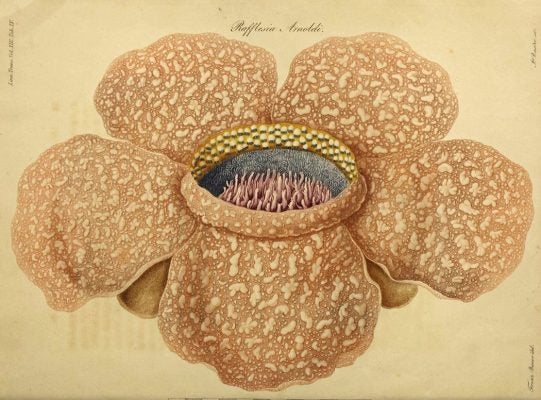 Plant of the Month: Corpse Lily