Out of the Card Catalog Closet

Librarians gathered in 1970 to challenge Library of Congress classifications and catalog subject headings that aligned homosexuality with deviance. 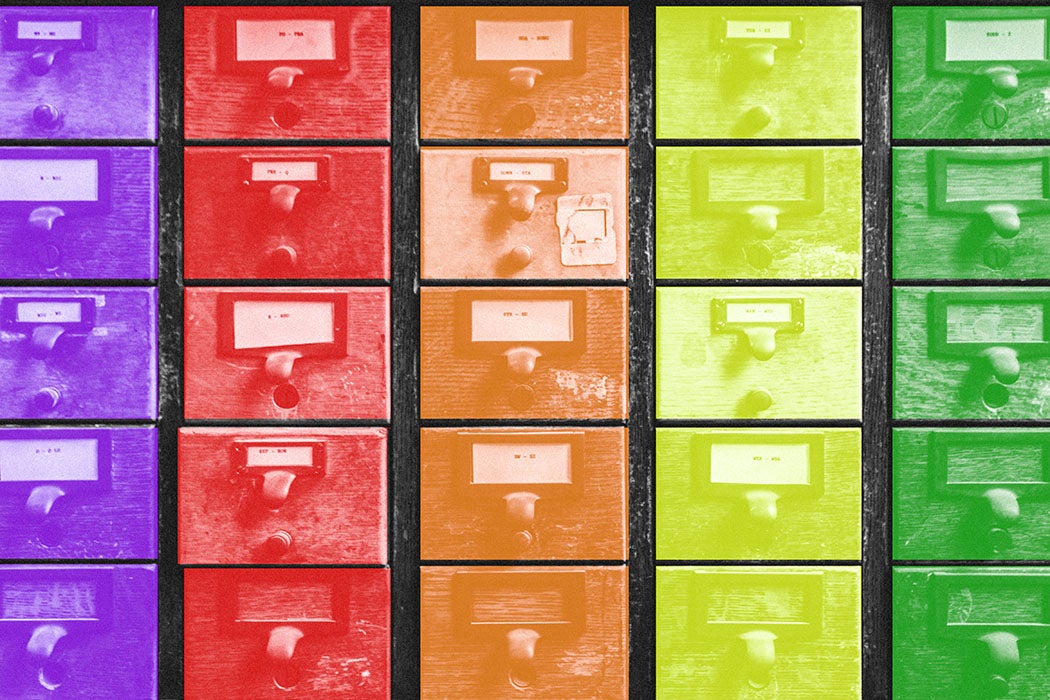 The Task Force on Gay Liberation of the American Library Association was the first gay and lesbian professional organization in the United States. Fifty librarians attended its inaugural gathering in 1970 to fight job discrimination; to create bibliographies and collections that featured gay and lesbian content; and to challenge library classifications and catalog subject headings that aligned homosexuality with perversion and deviance.

These librarians, writes scholar Melissa A. Adler, “recognized that labels could stigmatize library patrons and preclude access.” And, recognizing that they “influenced broader public understandings of sexuality and its power structures,” they set about challenging the Library of Congress.

“Generally active in the wider gay liberation movement, [these librarians] not only demanded rights and recognition but also challenged the organizing techniques that regulate and enforce heteronormative knowledge structures in the places where we find literature and information about sex and sexuality.”

Although it took the better part of two decades, they made major changes in how material about homosexuality is cataloged.

Adler concentrates on librarians and staff who worked against the pathologizing vocabularies used to describe homosexuality. They challenged “the dominant structures and ideologies at play in the very institutions that collect and situate knowledge.” Although it took the better part of two decades, they made major changes in how material about homosexuality is cataloged and shelved by the Library of Congress and, by extension, many other libraries.

Subject headings—used to ensure conformity and universality within and across library catalogs—are a key component in organizing large numbers of books. The most “widely adopted subject indexing language in the world” is the Library of Congress Subject Headings (LCSH). It has been translated into multiple languages and used by libraries large and small. As Adler writes, the Library of Congress, the “oldest federal cultural institution and the largest library in the world,” has been in “a particular position of authority among the discourses that have established sexual categories.”

Before librarians convinced the Library of Congress to revise its subject headings, books about homosexuality or otherwise homosexual in theme were “shelved alongside books on sex crimes, incest, and pedophilia.” Bibliographic classification—which governs the arrangement of books on the shelves—had since 1910 put homosexuality under first “Abnormal sex relations” and then “Sexual deviation.” Cross-listings for “Sexual perversion” reinforced medicalized, pathological discourses. “See also: Sodomy” referenced the criminal.

Because “libraries serve as critical sites of identity construction,” Adler writes that the “terminologies they use have mattered in the lives of queer, lesbian, bisexual, gay, intersex, and transgender-identified people.”

It’s notable, for instance, that Barbara Gittings, the second coordinator of the Task Force on Gay Liberation, was also instrumental in getting the American Psychiatric Association to remove “homosexuality” from its list of disorders in the Diagnostic and Statistical Manual (DSM). About her library work, Gittings said, the point was to “counter the lies in the libraries about homosexuality, so that gay people will no longer be assaulted and bewildered or demoralized by almost everything they read on the subject.”

Librarians managed to remove “Homosexuality” from broader, pathological categories. In 1988, the Library of Congress made “Gays” the subject heading instead of “Homosexuals.” (“Lesbians” was accepted as a subject heading much earlier, in 1975). All this mirrored societal trends of gay liberation and the broadening of the discussion of sexuality into “interdisciplinary rather than exclusively psychiatric/sexological” areas. “Scholars, readers, and librarians came to demand that subject heading be based on terms in use by the communities involved,” notes Adler.

“We need organizational tools and structures to bring order so that we can find the texts we seek,” writes Adler. Yet, “such structuring techniques necessarily confine and inscribe dynamics of power and politics.” The reductionism necessary for a cataloging system simply can not “account for the multiplicity of identifications.” This Indiana University listing of subject headings on LGBTQI topics, however, shows the depth of the start.

“Let’s Not Homosexualize the Library Stacks”: Liberating Gays in the Library Catalog
By: Melissa A. Adler
Journal of the History of Sexuality, Vol. 24, No. 3 (September 2015), pp. 478–507
University of Texas Press

The Lesbian As Villain or Victim

In Oregon in the 1960s, the debate over capital punishment hinged on shifting interpretations of the gendered female body.