How LGBTQ+ Activists Got “Homosexuality” out of the DSM

The first DSM, created in 1952, established a hierarchy of sexual deviancies, vaulting heterosexual behavior to an idealized place in American culture.

Nearly 50 years ago, LGBTQ+ activists achieved what was called the “greatest gay victory” of the time: successfully pushing members of the American Psychiatric Association (APA) to remove the diagnosis of homosexuality from the official classification of mental illnesses, the Diagnostic and Statistical Manual of Mental Disorders (DSM). By citing homosexuality as a mental illness, the APA and its members stigmatized LGBTQ+ people, and non-normative sexualities and gender expressions. Declassification, as the years-long effort was known, culminated in 1973, when in May, LGBTQ+ voices were heard at the annual APA conference, and later the APA Board of Trustees voted to remove homosexuality from the DSM. The change signaled to the country that there was not an inherent link between mental illness and homosexuality.

For queer people growing into their adulthood, it can be difficult to understand just how much progress has been made toward sociocultural acceptance of LGBTQ+ people. The classification of mental illness was born from the legacy of multiple systems of power: the American legal system criminalized homosexual behavior; federal and state governments had not yet codified protections for queer and trans people seeking employment and housing; and an insistence on heteronormative gender roles stigmatized anyone who deviated from their role as a “woman” or a “man.”

The American Psychiatric Association was founded in 1844 by 13 superintendents of US institutions for people with mental illnesses. The organization ballooned in membership after the end of WWII, likely due to the GI Bill allowing thousands of young (mostly white) men to attend college. Given that the majority of US universities did not admit women into their ranks until the mid-twentieth century, the APA was largely a male-dominated organization at the time of the declassification effort.

The first DSM, created in 1952, established a hierarchy of sexual deviancies, thus centering heterosexuality and vaulting heterosexual behavior to an idealized place in American culture. In making heterosexuality the “norm,” the APA effectively made homosexuality the “other.” APA officials were insistent on codifying and differentiating “natural” or “healthy” behavior from “unnatural,” meaning “unhealthy” behavior. The organization believed that non-procreative sex was unnatural because it could not result in a child.

The campaign to remove the “homosexuality” diagnosis from the DSM began in earnest in the 1960s, backed by a growing civil rights, women’s rights, and gay rights movement across the country. Dubbed the “homophile” movement, gay and lesbian rights organizations in major cities like New York City, San Francisco, and Philadelphia started to pressure elected officials and launch public campaigns for LGBTQ+ visibility and rights. Gay liberation efforts were occurring on a number of fronts, and the APA declassification effort was one part of the movement for equality and acceptance.

Karla Jay, a lesbian activist, said that protestors shouted to the APA members, “off of the couches and into the streets!”

Activists ramped up their efforts after years of campaigning from the outside: they decided to go straight to the APA conferences where practitioners attended panels and discussions of psychiatry and psychology—and could press to declassify homosexuality. Activists attended conferences with the intention of going straight to the source. Karla Jay, a lesbian activist who participated in disrupting a panel discussion on “sex problems” that advocated shock treatment to “cure” homosexuality, said that protestors shouted to the APA members, “off of the couches and into the streets!”

Yet activists were working against a number of hurdles, one being the fact that APA members could weaponize the moniker of “mentally ill” against queer and trans people, disqualifying them from talking about their own experiences with authority. Generally, their calls went unheard: “Conference attendees in San Francisco summarily dismissed protesters as maniacal and schizophrenic,” the scholar Abram J. Lewis writes in the Journal of the History of Sexuality. “One scandalized audience member quoted by the Washington Post assessed an anonymous feminist protester, somewhat less clinically, as a ‘paranoid fool and a stupid bitch.’”

In order to push for the APA declassification, activists had to appeal to the sensibilities of the organization’s members. Thus, in addition to pressuring the APA from the outside by taking direct action to disrupt its proceedings, activists knew that APA members would need to be persuaded by one of their own. In 1972, at the first conference that actually featured a panel discussion on homosexuality led by LGBTQ+ people, a gay practitioner, John Fryer, testified on behalf of the declassification campaign. Given the risk involved with openly identifying as a gay psychiatrist, Fryer presented himself as “Dr. Henry Anonymous” and disguised his identity by wearing a mask and using a microphone with a voice distorter.

“Pull your courage up by your bootstraps and discover ways in which you as homosexual psychiatrists can be appropriately involved in movements which attempt to change the attitudes of both homosexuals and heterosexuals toward homosexually,” Fryer pleaded. “For all of us have something to lose.” The testimony did not convince voting members of the APA to remove the classification that year, but would signal a major turning point in the declassification effort.

In 1973, activists succeeded in their efforts. As they had in years past, gay activists disrupted panels and gave speeches. One of the more famous speeches offered at the May 1973 APA conference in Honolulu was by a gay activist named Ronald Gold, who told the APA members, “Stop it, you’re making me sick.” The resounding line was somewhat of a double entendre: the APA was literally saying that Gold, as a gay man, was ill, implying that the “medical professionals” were creating sickness where there was none. And, in stigmatizing Gold’s personhood, the APA was helping to further the social conditions that alienated and ostracized queer people—like him.

Ultimately, activists were successful in part by pointing out the gaps in the APA’s own reasoning behind classification. The declassification movement made heavy use of the fact that, until this time, the members had not really defined what a mental illness was, only asserted that they existed and had a distinct etiology, though the brain’s complexity prevented complete precision. “In fact, the controversy over the homosexuality diagnosis was able to reach such heights of publicity in part because the APA had never had cause to reach consensus on a standardized definition of mental illness,” Lewis writes.

In addition to highlighting the gaps in the APA’s argument, activists demonstrated and testified that they were productive members of society. They believed that by demonstrating that they could find gainful employment, maintain relationships, and assimilate into heteronormative culture, they could prove that there was nothing abnormal—and nothing impairing—about homosexuality.

In an interview with The New York Times just days after the 1973 vote for declassification, Robert L. Spitzer, M.D., a member of the nomenclature committee, said that a mental condition could be defined as that which causes distress or impairs social functioning, such as finding and maintaining a job or a relationship. “Clearly homosexuality per se does not meet these requirements: Many homosexuals are satisfied with their sexual orientation and demonstrate no generalized impairment,” Spitzer said. An official statement from the APA later reflected Spitzer’s statement: “homosexuality, per se, implies no impairment in judgment, stability, reliability, or general social or vocational capabilities.”

To many LGBTQ+ people at the time, the reversal of the mental disorder classification was too little, too late; the damage of calling LGBTQ+ people insane was done. Homosexuality was no longer considered an illness, but the stigma did not subside. In other ways, pushing for declassification as an illness was simply the impetus for further scrutiny. As Spitzer wondered: “If homosexuality does not meet the criteria for psychiatric disorder, what is it? Descriptively, we can say that it is one form of sexual behavior. However, in no longer considering it a psychiatric disorder, we are not saying that it is normal, or that it is as valuable as heterosexuality.”

Lewis noted that, although the campaign was ultimately successful in its efforts, there were unintended consequences. In pushing for the definition of mental illness, activists distanced themselves from other individuals who suffered mental illnesses, further stigmatizing non-neurotypical behavior and characteristics. Moreover, the APA actually responded to pressure to define mental illness by creating more potential diagnoses. As Lewis writes, “Ironically, the declassification campaign eventually helped expand and enshrine the authority of the very text that gay reformers initially sought to critique.” Declassification corresponded with a “major step away from social and environmental understandings of mental pathology,” Lewis writes, which elided the very real impact that the APA contributed to the social stigmatization of mental illness—and of LGBTQ+ people.

Removing Gender Identity Disorder from the "Diagnostic and Statistical Manual of Mental Disorders": A Call for Action
By: Amber Ault and Stephanie Brzuzy
Social Work, Vol. 54, No. 2 (April 2009), pp. 187-189
Oxford University Press
"We Are Certain of Our Own Insanity": Antipsychiatry and the Gay Liberation Movement, 1968–1980
By: ABRAM J. LEWIS
Journal of the History of Sexuality, Vol. 25, No. 1 (JANUARY 2016), pp. 83-113
University of Texas Press
Unmasking “Dr. Anonymous” in the John Fryer Papers
By: Ain Gordon and Beth A. Twiss Houting
Pennsylvania Legacies, Vol. 16, No. 1 (Spring 2016), pp. 3-5
University of Pennsylvania Press 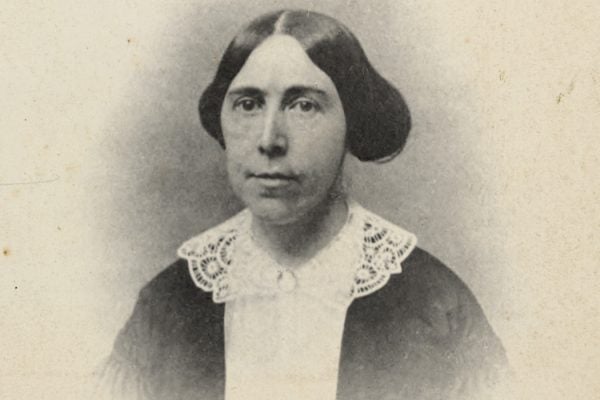 Sophia Thoreau to the Rescue!

Who made sure Henry David Thoreau's works came out after his death? His sister.