Giving Stonewall too much credit misses the movement’s growing strength in the 1960s, sociologists note. 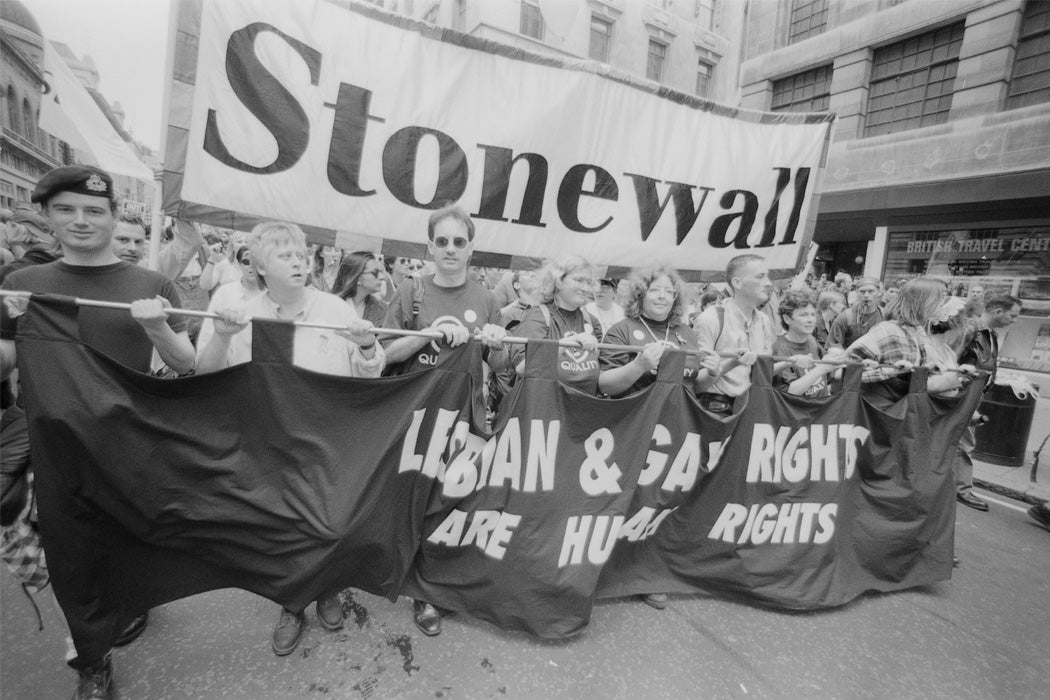 Despite what you may hear during this year’s fiftieth anniversary commemorations, Stonewall was not the spark that ignited the gay rights movement. The story is well known: A routine police raid of a mafia-owned gay bar in New York City sparked three nights of riots and, with them, the global gay rights movement. In fact it is conventional to date LGBTQ history into “before Stonewall” and “after Stonewall” periods—not just in the United States, but in Europe as well. British activists can join Stonewall UK, for example, while pride parades in Germany, Austria, and Switzerland are called “Christopher Street Day,” after the street in New York City on which the Stonewall Inn still sits.

But there were gay activists before that early morning of June 28, 1969, previous rebellions of LGBTQ people against police, earlier calls for “gay power,” and earlier riots. What was different about Stonewall was that gay activists around the country were prepared to commemorate it publicly. It was not the first rebellion, but it was the first to be called “the first,” and that act of naming mattered. Those nationally coordinated activist commemorations were evidence of an LGBTQ movement that had rapidly grown in strength during the 1960s, not a movement sparked by a single riot. The story of how this particular night and this particular bar came to signify global gay rebellion is a story of how collective memory works and how social movements organize to commemorate their gains.

The sociologists Elizabeth A. Armstrong and Suzanna M. Crage detail four previous police raids on gay bars in cities across the United States that prompted activist responses—and local gains—but that either faded from local memory, did not inspire commemorations that lasted, or did not motivate activists in other cities.

For example, San Francisco activists mobilized in response to police raids on gay bars in the early 1960s, which came to a head during a raid on a New Year’s Eve ball in 1965 that eventually brought down the police commissioner. This New Year’s Eve raid attracted wide media attention, garnered heterosexual support, and is credited with galvanizing local activists, but it was subsequently forgotten. In 1966, again in San Francisco, LGBTQ people rioted at Compton’s Cafeteria, smashing all the windows of a police car, setting fires, and picketing the restaurant for its collusion with police. The city’s gay establishment did not participate, however, and distanced themselves from the transgender and street youths and their political organization, Vanguard, behind the “violent” protest.

The 1967 police raid on the Black Cat bar, for instance, led to a demonstration 400 people strong that garnered evening news coverage.

San Francisco was not the only U.S. city with gay rights activists gaining strength. In Los Angeles, the first national gay rights organization, the Mattachine Society, was founded years earlier, in 1951, and spawned chapters in other cities around the country. Bar raids in late-1960s Los Angeles also prompted resistance. The 1967 police raid on the Black Cat bar, for instance, led to a demonstration 400 people strong that garnered evening news coverage. That demonstration played a role in the founding of the leading national LGBTQ magazine, The Advocate. While the Black Cat demonstration garnered support from heterosexual activists for Chicano and Black civil rights, no further coordination occurred, and the event was not commemorated. When police again descended on the L.A. nightclub The Patch, patrons struck back immediately, marching to city hall to lay flowers and singing civil rights anthem “We Shall Overcome.” But its anniversary passed without remembrance. Los Angeles activists did organize a one-year vigil on the anniversary of the night the L.A. police beat a gay man to death in front of the Dover Hotel, but this 120-person-strong rally and march to the police station did not inspire activists in other cities. Subsequent demonstrations were subsumed by the Stonewall commemorations.

Activists were busy on the East Coast before Stonewall, too. In Washington, D.C., LGBTQ veterans chose the Pentagon as their place to picket, making it onto national television with signs reading, “Homosexual citizens want to serve their country too.” Subsequent demonstrations targeted the White House and the offices of Federal agencies. New York City’s Mattachine Society secured legal gains in 1966 when they organized a “sip-in” at the bar Julius’, securing the right of homosexuals to gather in public. None of these actions inspired commemoration, locally or in other cities, however, leading scholars to look for pre-Stonewall protests. The question that scholars are seeking to answer is: Why not?

There was an annual demonstration for gay civil rights before Stonewall, however, and it provides the best example of how gay politics were growing and changing before the riots. Beginning in 1965, Philadelphia LGBTQ activists began an annual picket of Independence Hall on the Fourth of July to protest state treatment of homosexuals. Soberly-dressed men and women with carefully worded signs walked solemnly in front of this iconic building where the Declaration of Independence and U.S. Constitution were debated and signed. These “Annual Reminders” were the result of coordination by activists in New York, Washington, and Philadelphia, evidence of burgeoning regional cooperation by gay rights activists in the 1960s. Yet these somber events unraveled in the week after Stonewall, and Philadelphia activists voted later in 1969 to shift the 1970 commemoration from a picket of Independence Hall to a parade in the streets on the Stonewall anniversary.

Gay politics had become more radical in the late 1960s, owing to the influence of the Black power movement, second-wave feminism, and the protests against the Vietnam war. Radical organizations advocating “gay power” had already sprung up in the 1960s, including in Greenwich Village, where the Stonewall Inn was located. These new activists stereotyped the actions of their forebears as conservative, erasing their contributions from a history that now was credited solely to Stonewall.

What was different about Stonewall was that organizers decided to commemorate it, and to make it a national event. At a meeting in November of 1969, regional activists broke with the respectable image of the Philadelphia “Annual Reminder” and vowed to secure a parade permit on the anniversary of the raid on the Stonewall Inn, calling it Christopher Street Liberation Day. These organizers reached out to groups in Chicago and Los Angeles who readily agreed to remember something that happened elsewhere, in part because it was one of the few acts of LGBTQ resistance to get widespread media coverage, including in national LGBTQ publications and the New York Times.

This media coverage was itself the product of previous ties between local LGBTQ activists and journalists—and the fact that the Stonewall Inn was so near to the offices of the Village Voice. Interestingly, San Francisco’s activists declined to participate because they had already made inroads with local politicians and clergy. As one member explained, “I did not think a riot should be memorialized.” Only a small breakaway group participated, to little local effect, in a city that today hosts one of the largest gay pride parades in the country. These coordinated marches in Los Angeles, New York, and Chicago in 1970 were the first gay pride parades, and sparked an idea that spread around the country—to 116 cities in the United States and 30 countries around the world.

It was this national act of commemoration that represented a truly new political phenomenon, not the riot itself. As Armstrong and Crage have written, “without the existence of homophile organizations elsewhere, many of them founded only in the late 1960s, a national event would have been unthinkable.” Stonewall was an “achievement of gay liberation,” and not its cause, and an achievement of collective memory and collective action, if not the first LGBTQ riot or protest.

It is notable that this achievement took the form of a joyful parade, rather than a somber picket like Philadelphia’s Annual Reminder. As the sociologist Katherine McFarland Bruce describes in her detailed history of pride parades in the United States, “planners settled on a parade format as the best way to accommodate diverse members and to produce the positive emotional experience that brought people together.” As early organizers noted, “a fun parade brings out more people than an angry march.” Unlike the Annual Reminder, which addressed the state in asserting the similarity of homosexuals with heterosexual citizens, parade participants celebrated their differences and aimed to change minds, not laws.

There were unique characteristics of Stonewall, of course. In his detailed history of the bar and those nights, the historian David Carter lists many: It was the only bar raid that prompted multiple nights of riots; it was the only raid that occurred in a neighborhood populated by lots of other LGBTQ people who might participate; and the bar was the city’s largest, located in a transportation hub surrounded by many public telephones that were used to alert media.

But Carter also notes that the riots were not inevitable, and were just a turning point in the United States’ burgeoning gay rights movement. New York City already had many gay activists “with the specialized skills to take on leadership roles to help shape and direct the event,” for example. He also gives special credit to the fact that several of the riots, including Stonewall and the Compton’s Cafeteria riots in San Francisco, occurred during police raids right after a period of liberalization. In San Francisco, Compton’s clientele only fought back after gaining hope from the city’s pre-Stonewall municipal liberalization towards homosexuality. In New York City (where the Stonewall riot took place), the police raid seemed out of step with the liberal administration of mayor John Lindsay. As Carter summarizes, “revolutions tend to happen after periods of liberalization.”

As activists commemorate the Stonewall Riots in 2019, perhaps they should also lay plans for next year, to remember the fiftieth anniversary of the first gay pride parade in 2020. The nation finds itself again in an era of retrenchment after the liberalization of the Obama era. It follows that 1970 thus deserves to be remembered as the first national act of LGBTQ remembrance, if not the first act of LGBTQ resistance. 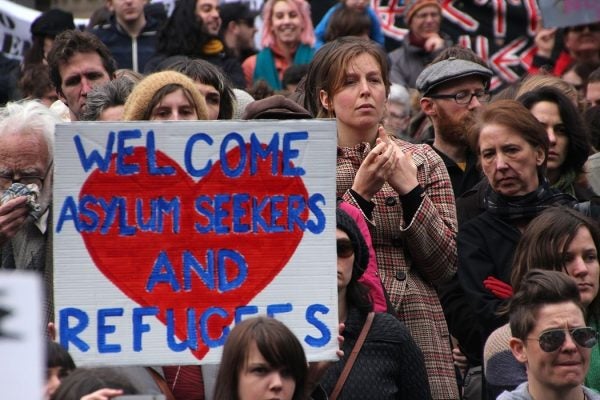 Until governments recognize the right to freely express sexual and gender identity, safe haven for LGBTQ refugees is uncertain at best.