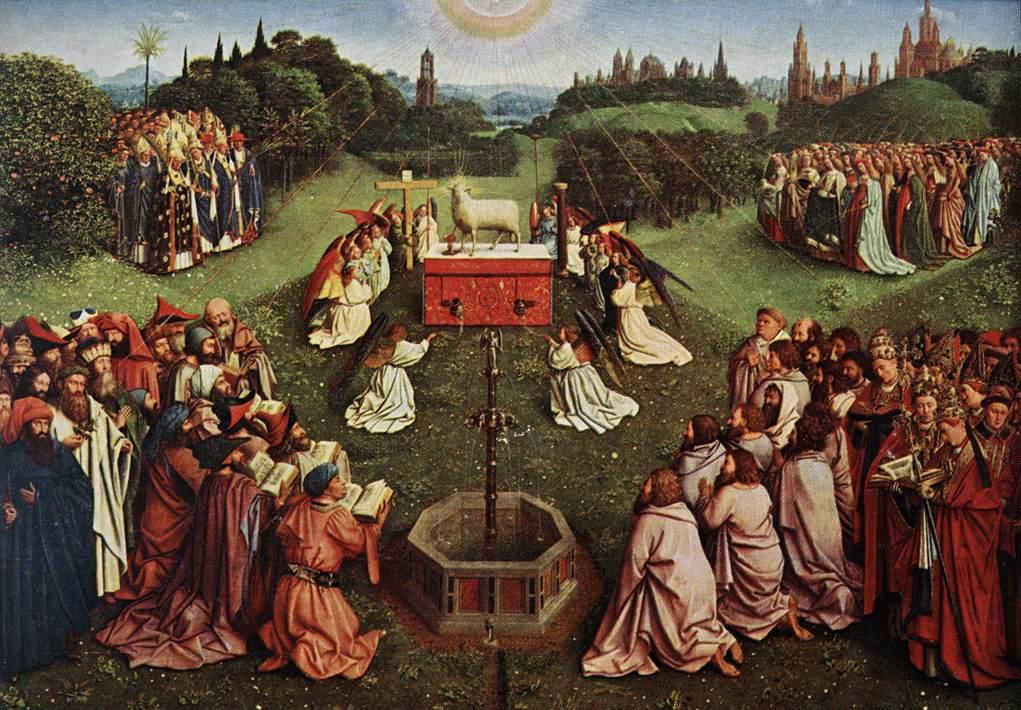 The bottom center panel of The Ghent Altarpiece (1432) by Hubert and Jan van Eyck. It is notable as the most stolen artwork.
Wikimedia Commons
By: Ashley Domingo Hendricks
4 minutes
Share Tweet Email Print

Popularized across all mediums of fiction, the art heist has been a part of Western narrative since at least the 1400s. The modern art heist is a crime to which we collectively return; most of us are at once fascinated by the procedure of the actual theft and, at the same time, curious about objects that are valued so abstractly. The romantic cat burglars of the heist, well-dressed and sleek in fictional depictions (and often touted as gentleman thieves), are seen less as criminals and more as connoisseurs, stealing from imposing museums and often returning art to a singular space of solidarity.

The art heist’s popularity in the cultural imagination may hinge on how valuable we perceive art to be, but its allure is also strengthened by a sense of mystery as to the art thief’s motivation, as well as to how complicated any given robbery turns out to be. Streaming services have seen big audiences for documentaries about art heists (Netflix’s docuseries This is a Robbery shot up its Top 10 list the day it dropped in 2021). Many of those films offer detailed narratives that literally map the job, quantifying how many people it took to pull off the crime and offering a hard dollar amount of the take.

The tension between looking and owning has become even more palpable with NFTs in the mix, changing the way artists and auction houses talk about art.

Aaron Freundschuh considers the way that the theft of Leonardo da Vinci’s Mona Lisa in 1911 from the Louvre became a touchpoint not only for period crime stories but for understanding everyday urban life in Paris in both the cultural and the spatial arenas. As Freundschuh emphasizes, Parisians thought of the theft as “the impossible crime”—not for its irreverence but for the logistics of actually getting the painting onto and through the streets of the city. For those who walked the pavements every day, who knew the spatial and urban order kept in line by the boulevards and monuments, the theft became unimaginable, less to do with the painting itself and more to do with the experience of an urban space.

Hillary Kelly details the procedure that art crime investigators follow, and it’s notable that her primer is visual, object-oriented, and labeled as neatly as an investigated crime scene. Her interview with Robert Wittman, who went undercover and recovered paintings by Norman Rockwell and Rembrandt, along with original copies of the Bill of Rights, confirms our vision of art crime authorities as Poirot-like, one-step ahead of the thief because they’re able to think like one. It’s a rendering that aligns the art criminal investigator directly with the thief, emerging as foil and worthy adversary. The art is priceless (or worthless, depending on when the piece is valued and by whom) but the object, whether it’s the fictional Maltese Falcon or an authenticated sketch by Pablo Picasso from a traveling exhibit, has already been put to the side and forgotten, replaced and revalued by how far someone would go to possesses it and how much someone else might sacrifice to get it back.

The recent documentary The Painter and the Thief speaks to these complex perspectives on art: a young Czech artist, Barbora Kysilkova, confronts and befriends the thief, Karl-Bertil Nordland, who stole her paintings from Galleri Nobel. There’s little emphasis on the cost of the paintings (The estimation of the works stolen totals around €20,000 but the valuation is simply mentioned to underscore the artist’s financial hardships as a relatively unknown name). When asked why he took the paintings, the thief answers only that he thought they were beautiful.

There’s a lyricism in that kind of art theft, too (or, at least that’s the way the film frames it, and the painter seems to agree). There’s no fanbase to mourn the theft of Kysilkova’s paintings. Her work was unguarded, taken in broad daylight. Nordland’s valuation of her work, unattached to a price tag, ushers in a tenuous friendship between the two that leads to Nordland sitting for a portrait. While the film was received positively by film festivals, it’s also been maddening for audiences who expect a Hollywood narrative, perhaps a romance, or Kysilkova’s rise as a successful artist. None of that is offered, however, and the questions we encounter at the start of the film on the value of art and of the invisibility of artists remain unanswered.

Few real art heist narratives offer tidy platitudes about the value of art, and the tension between looking and owning has become even more palpable with NFTs in the mix, changing the way artists and auction houses talk about art. The difference between owning a singular painting and a unique code of block chain involves high stakes, both monetary and philosophical. Walter Benjamin’s 1935 “The Work of Art in the Age of Its Technological Reproducibility” (or “The Work of Art in the Age of Mechanical Reproduction” as it’s better known) foreshadows this problem and identifies the decay of aura. Mass production punctures any authenticity in terms of a work claiming a certain space or time; not necessarily a negative thing, according to Benjamin, but a truth we must confront in technological (and now digital) reproduction. For Benjamin, the museum democratized art to a certain degree by opening the doors to the masses. From this perspective, a theft from a gallery might be understood as a theft from the public; the theft of an NFT and its unauthorized replication is harder to gauge.

While the defining digital art heist is bound to happen, it’s likely that its specifics won’t fit neatly into traditional narratives. It will be caught instead like the 1911 impossible theft of Mona Lisa or a seemingly illogical theft from an unknown artist—fascinating crimes that become interwoven into our evolving understanding of not only what art is but how we value it.

Crime stories in the historical urban landscape: narrating the theft of the "Mona Lisa"
By: Aaron Freundschuh
Urban History, Vol. 33, No. 2 (August 2006), pp. 274–292
Cambridge University Press
the things they carried: The Art Crime Investigator
By: Hillary Kelly
Foreign Policy, No. 215, CHANGING OUR MINDS: THE LEADING GLOBAL THINKERS OF 2015 November/December 2015), pp. 28–29
Slate Group, LLC
The Work of Art in the Age of Its Technological Reproducibility [First Version]
By: Walter Benjamin and Michael W. Jennings
Grey Room, No. 39, Walter Benjamin's Media Tactics: Optics, Perception, and the Work of Art (Spring 2010), pp. 11–38
The MIT Press