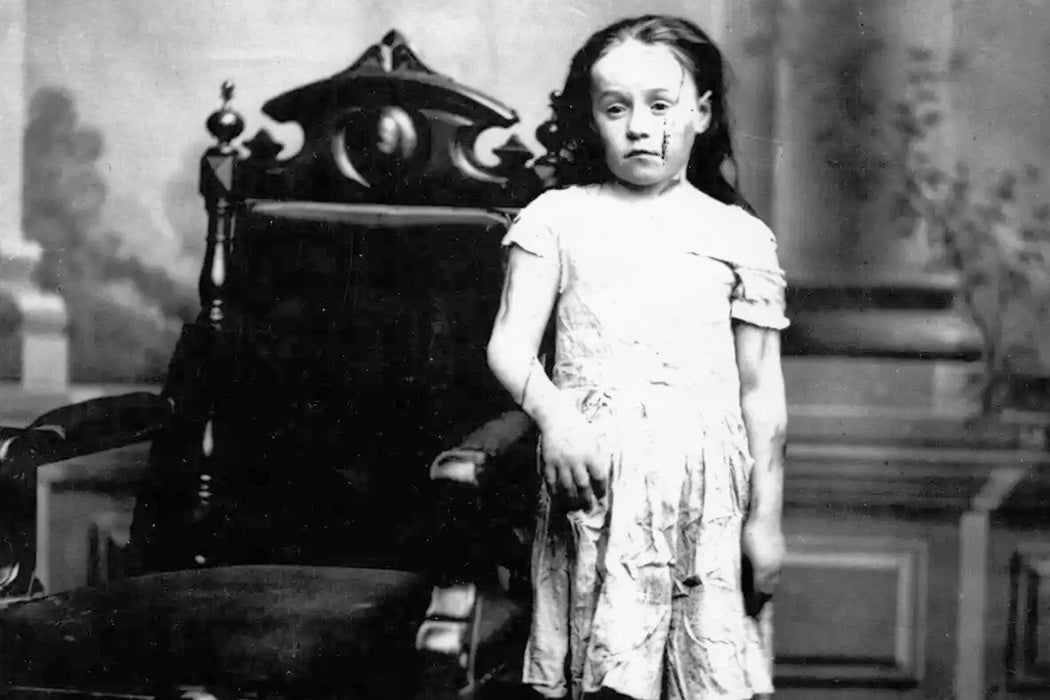 When did child abuse, long considered a private matter, became a public concern? The 1874 case of ten-year-old Mary Ellen Wilson of New York City is usually considered the first great challenge to a violent tradition.

“Despite the fact that for hundreds of years history records instances of cruelty to children by parents and other caretakers, few cases of child abuse were acted on in the courts before the nineteenth century,” explains scholar Lela B. Costin.

As Costin writes, many legends have arisen about Mary Ellen, including most prominently that, on the basis her being an “animal,” the Society for the Prevention of Cruelty to Animals (SPCA) stepped in to save her from her vicious foster parents.

Bergh and SPCA counsel Elbridge T. Gerry decided the child was entitled to protection under the laws against animal cruelty.

When no public or private entity would step in to help Mary Ellen, Etta Angell Wheeler (“variously termed a mission worker, a tenement visitor, and a social worker”) appealed to Henry Bergh of the SPCA. The story goes that she suggested that Mary Ellen should surely be thought of as “a little animal,” too. Bergh supposedly affirmed that “[t]he child is an animal. If there is no justice for it as a human being, it shall have least have the right of the cur” to not be abused. In this legend, Bergh and SPCA counsel Elbridge T. Gerry decided the child was entitled to protection under the laws against animal cruelty.

May Ellen and her foster mother, Mary Connolly, were in fact brought before a judge. Connolly was sentenced to one year of hard labor. Mary Ellen would live to the age of 92, dying in 1956. Gerry would go on to form the New York Society for the Prevention of Cruelty to Children (NYSPCC), which “triggered rapid growth” of other anti-child cruelty societies.

But the actual history of Mary Ellen’s rescue is more complicated than the legend. Since forming the SPCA in 1866, Henry Bergh had been asked repeatedly to help abused children.

“He ignored or resisted these appeals on the basis that cruelty to children was entirely outside his sphere of influence,” writes Costin.

For this he was pilloried in the press. In 1871, he did allow his investigators to intervene in another case of child abuse, and though authorizing Gerry to look into the Mary Ellen situation in 1874, he insisted he wasn’t doing so in his official capacity as President of the SPCA.

Gerry’s legal approach had nothing to do with animal cruelty. He argued that Mary Connolly was guilty of felonious assault on the “female child called Mary Ellen.” He also arranged for a common law warrant, De homine replegiando to “secure the release of a person from unlawful detention” and bring the child before a judge.

“Cruelty to children had long been tolerated […]. Why then did the Mary Ellen case serve to stimulate court invention and a widespread philanthropic response?” asks Costin. “Clearly the answer is not the severity of the cruel treatment.”

She proposes that this particular case “of private violence becoming ‘public property’ is best explained by a fortuitous fusing of a constellation of varying and sometimes competing factors.”

There was the press; the mistreated girl was considered more newsworthy than, for instance, the thirteen-year-old boy beaten to death by his father in the city earlier that year. Mary Ellen’s situation also showcased widespread institutional rot, “serious dereliction on the part of private charities and public relief,” that gave rise to calls for reform. (Mary Ellen had actually been indentured to the Connollys, a system one local newspaper criticized as a “well-stocked child market.”) Public authorities came in a for a hammering, too, for adding to “the neglect of children by failing to enforce existing legislation, set standards and supervise child placement activities.”

Violence against children and women within the family was also a great concern of the growing women’s rights movement. Anti-violence meshed with suffrage, marriage law reform, and birth control campaigns. But a countering “judicial patriarchy” arose to maintain “male supremacy in decisions about parent rights and definitions of acceptable parental care” with judges instead of fathers at the helm.

The NYSPCC’s Gerry, for instance, used the new child protection climate to police immigrant family life—his agents having actual police powers. His work, writes Costin, “forestalled well into the twentieth century the development of a rational system of child protection within a larger system of social services.”