Why Did the Suffragists Wear Medieval Costumes?

Medieval costume was a standard feature of US women’s suffrage parades, often with one participant designated as Joan of Arc. 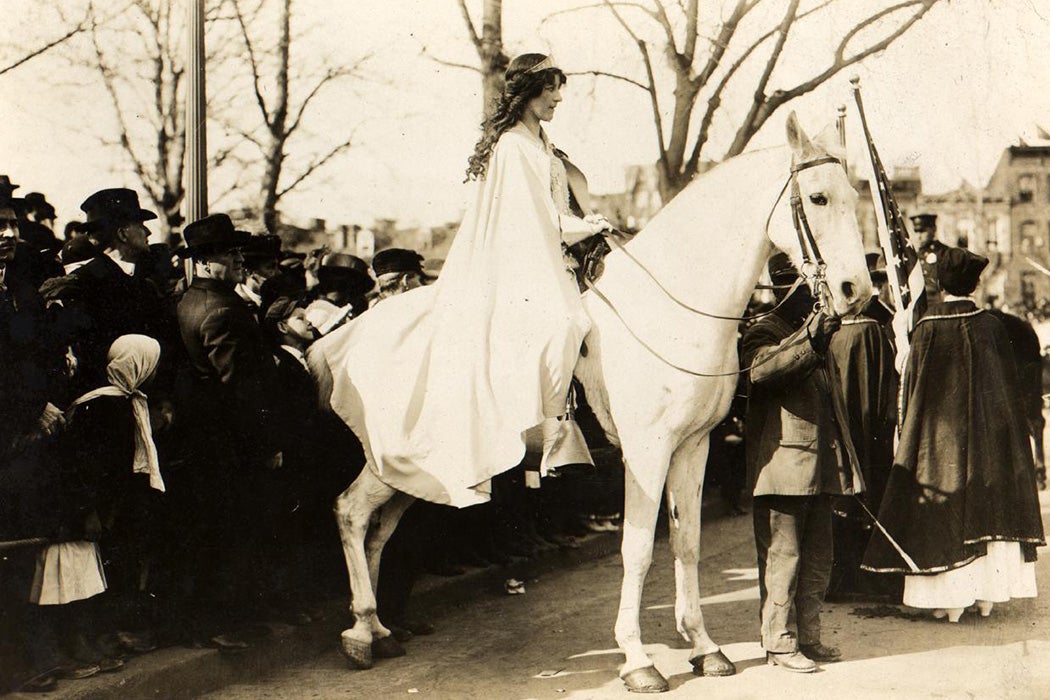 In the past four years, American women have dressed as Atwoodian handmaids to protest abortion restrictions and the nomination of Supreme Court justice Brett Kavanaugh; the “pussy hat” was the accessory of choice at the 2017 Women’s March (and subsequent women’s marches); many women wore white to the polls on election day 2016 to honor the suffragists. The suffragists themselves also used clothing and costume in their fight for their political rights more than a hundred years ago. This year, the United States will celebrate the one hundredth anniversary of their success and the ratification of the Nineteenth Amendment.

In the 1910s, US suffragists emulated and expanded on the British women’s movement’s interest in medieval costume as part of their parades (or “pageants,” their preferred term). Medieval costume became a standard feature of the American suffrage parade throughout the decade, with one participant often designated specifically as Joan of Arc. These medievalist pageant performances allowed suffrage advocates to embody a quasi-military activism that was chronologically distant enough to be perceived as unthreatening to contemporary gender roles.

The most famous example of the medievalist impulse in the suffrage movement is Inez Milholland, who dressed as a medieval herald as she led the Women’s Suffrage pageant through Washington DC on March 3, 1913. With her crown, sweeping white cape, flowing hair, white horse, and riding gloves shaped like armored gauntlets, Milholland provided a medievalist representation of the glamour of the suffrage movement. Her reputation as the most beautiful of the American suffragists only enhanced that glamour. She rode confidently astride her herald’s horse, not in the more demure side-saddle posture.

While a student at Vassar college, Milholland had studied medieval history for two semesters (she graduated in 1909) and drew on her academic knowledge in fashioning her costume. In her role as the herald of the suffrage parade, Milholland played with conventional medievalist tropes; she saw herself as a crusader or champion for the cause, invoking medieval military language. The art historian Annelise K. Madsen, in her analysis of the 1913 parade, quotes a contemporary reference to the “crusade of women.” Like many newspapers of the era, the Philadelphia Inquirer, in its coverage of the 1915 Philadelphia parade, also used military diction, referring to a “suffragist army.”

Joan of Arc represented a pure, beautiful, young woman fighting for goodness and virtue against men who sought to oppress her.

In many of these pageants, a marcher specifically designated as Joan of Arc embodied that military idea. As I noted in my 2017 book Public Medievalists, Racism, and Suffrage in the American Women’s College, the symbolism focused on Joan as a triumphant female figure of inspiration, purity, and righteousness, ignoring her eventual torture and execution for her religious and political beliefs. For the suffrage paraders, Joan represented a pure, beautiful, young woman fighting for goodness and virtue against men who sought to oppress her. In short, they ascribed their own motives to her. The New York City suffrage parade of May 4, 1912 featured Marie Stewart in armor as Joan of Arc. The Boston suffrage parade of May 2, 1914 included at least three marchers costumed as medieval women, representing Joan of Arc, Isabella of Spain, and a non-specific “medieval lady.” Both Joan of Arc and Isabella of Spain rode astride in Boston. The May 1, 1915, Philadelphia suffrage parade also featured “a Joan of Arc” at its head, portrayed by a 16-year-old, wearing a short cape and a vaguely medieval-looking helmet, riding on a white horse.

These women benefited from the chronological distance provided by popular notions about the Middle Ages: a woman in a medieval “costume,” even one wearing armor, did not provoke the same reaction as would a woman in a “costume” that looked like a 1913 military uniform, complete with a gun and steel helmet. Such a uniform belonged to the realm of the masculine. The medieval ensemble implied a welcoming sense of playfulness and theatricality. While not overtly feminine (Joan was a warrior cross-dresser, after all), the medievalist presentation was not perceived as aggressive by its audiences, or at least not more aggressive than the suffrage movement in general. These costumes broadcast supposed metaphorical similarities between “the Cause” and the celebrated goals of Joan of Arc and other medieval champions, while maintaining a veneer of acceptable femininity.

Simultaneously, suffrage publications and workshops provided detailed academic rationale for these costumes as emblematic of a past time when women supposedly had more political rights than they did in the early-twentieth-century United States. In doing so, they participated in what the English professor Maria DiCenzo describes as the “invention of tradition” in her overview of the historiography of the British suffrage movement. Suffragists in the United States, like those advocating for “The Cause” in England, argued for historical precedent for their political goals, seeing their current lack of suffrage as a contraction of earlier access. The headline “Women Voted in Middle Ages,” in the May 24, 1913 issue of the Woman’s Journal and Suffrage News, introduced its readers to the idea that women had civil rights in the western European Middle Ages. The unsigned piece claims:

… as far as there is a tradition, it is in favor of woman suffrage… wherever the right to vote did exist, in the great medieval corporations, for example, in cantonal, communal or municipal affairs, and especially in female as well as male religious communities, women as such were not excluded from voting.

Sub-headings like “Women Voted Long Ago,” “Women Had Civil Rights,” “Many Women Had Power,” and “Women Voted in Religious Communities” expand on this argument. Aristocratic women in western Europe did indeed have some of these powers of self-determination described in the article (some nuns elected their abbesses, subject to final approval from a bishop, for instance). While current historians would disagree with the vision of the article’s subheads, which present the European Middle Ages as a bastion of gender equity, it is true that many individual medieval women wielded power in a variety of ways unexpected in the twenty-first-century popular imagination.

It’s interesting to note that the article was published by the National American Woman Suffrage Association (NAWSA), the more moderate of the pro-suffrage organizations. The NAWSA, initially led by a group of women that included Susan B. Anthony, relied on tactics that were somewhat politically conventional and definitely legal: pageants, meetings, petitions, and lobbying. After passage of the Nineteenth Amendment, the moderate NAWSA became the League of Women Voters.

In contrast to the NAWSA, the more radical Congressional Union for Woman Suffrage (CU) used more militant tactics to achieve the same end, the passage of the Nineteenth Amendment. CU members staged daily pickets in the front of the White House. They were frequently arrested or imprisoned for trespassing and disturbing the peace. Despite the CU’s tactical differences from the NAWSA, both employed medievalist rationales for their political goals.

As I wrote in Public Medievalists, the CU newspaper, The Suffragist, advertised and then reported on the CU’s “Suffrage School,” which offered two week-long sessions in Washington, D.C., in the middle of December 1913. For the aspiring suffrage activists, Goucher College history professor Annie Heloise Abel gave lectures entitled “Voting Women of the Middle Ages” (first week) and “The Political and Property Rights of Women in the Middle Ages” (second week); these lectures accompanied workshops on public speaking and constitutional law. Part of the CU’s goal was to ensure that its members had information about the presumed historical basis for their political objectives. Given her specific expertise, it is extremely likely that Abel is the author of the unsigned article in the Woman’s Journal. In the still relatively new nation of the United States, suffrage activists like Abel drew on selective versions of distant, medieval history that served their political and social goals.

However, medievalist costumes and symbols were available only to the white women active in the campaign. The symbolic virtue and purity of Joan of Arc informed a racialized femininity implicitly coded for whiteness. Despite their differences, both NAWSA and CU organizers feared alienating white Southern supporters with any overt inclusion of black women, especially in the very public pageant displays. The English professor Kate White refers to these “contradictory impulses” of the pageant phenomenon in the early twentieth century, wherein the pageants were able to “both maintain and challenge existing power structures.” White is most interested in the civic education pageants that welcomed immigrants into U.S. culture, while simultaneously re-inscribing that culture as a form of benevolent white patriarchy. She discusses as well, however, the suffrage pageants that promoted the progressive goal of universal suffrage along with sexist assumptions about conventional feminine beauty—and racist assumptions about white superiority.

The racism that saturated the pre-WWI United States led the white 1913 pageant organizers to try to keep noted activist Ida B. Wells-Barnett and other black suffragists at the back of the parade, in a racially segregated section. Despite these efforts, Nellie Quander and the Howard University suffrage delegation marched with groups from other colleges. Wells-Barnett herself joined the Illinois delegation.

Wells-Barnett was known throughout the African-American community as the “Black Joan of Arc” for her lifelong work against lynching, racism, and segregation. While the white women who dressed as Joan of Arc were praised by the press for their attractive medievalist costumes and political dedication, Wells-Barnett earned the title without the costume, and despite resistance from white women activists.

On the centennial of their victory, the medievalist suffragists provide for us a historical example of the ongoing importance of fashion and apparel to women activists across time. When representatives in Congress are wearing #SuffragetteWhite for the State of the Union address, or actors are wearing #MeToo black to the Golden Globes to honor victims of sexual assault and harassment, they are using traditionally feminine tools of appearance, clothing, and costume to assert their political points.

"Out of the Parlors and into the Streets": The Changing Tactical Repertoire of the U.S. Women's Suffrage Movements
By: Holly J. McCammon
Social Forces, Vol. 81, No. 3 (Mar., 2003), pp. 787-818
Oxford University Press
Columbia and Her Foot Soldiers: Civic Art and the Demand for Change at the 1913 Suffrage Pageant-Procession
By: Annelise K. Madsen
Winterthur Portfolio, Vol. 48, No. 4 (Winter 2014), pp. 283-310
The University of Chicago Press on behalf of the Henry Francis du Pont Winterthur Museum, Inc.
Justifying Their Modern Sisters: History Writing and the British Suffrage Movement
By: Maria DiCenzo
Victorian Review, Vol. 31, No. 1 (2005), pp. 40-61
The Johns Hopkins University Press
"The pageant is the thing": The Contradictions of Women's Clubs and Civic Education during the Americanization Era
By: Kate White
College English, Vol. 77, No. 6 (July 2015), pp. 512-529
National Council of Teachers of English