Is Writing a Technology or a Language? Let’s Ask Some Aliens 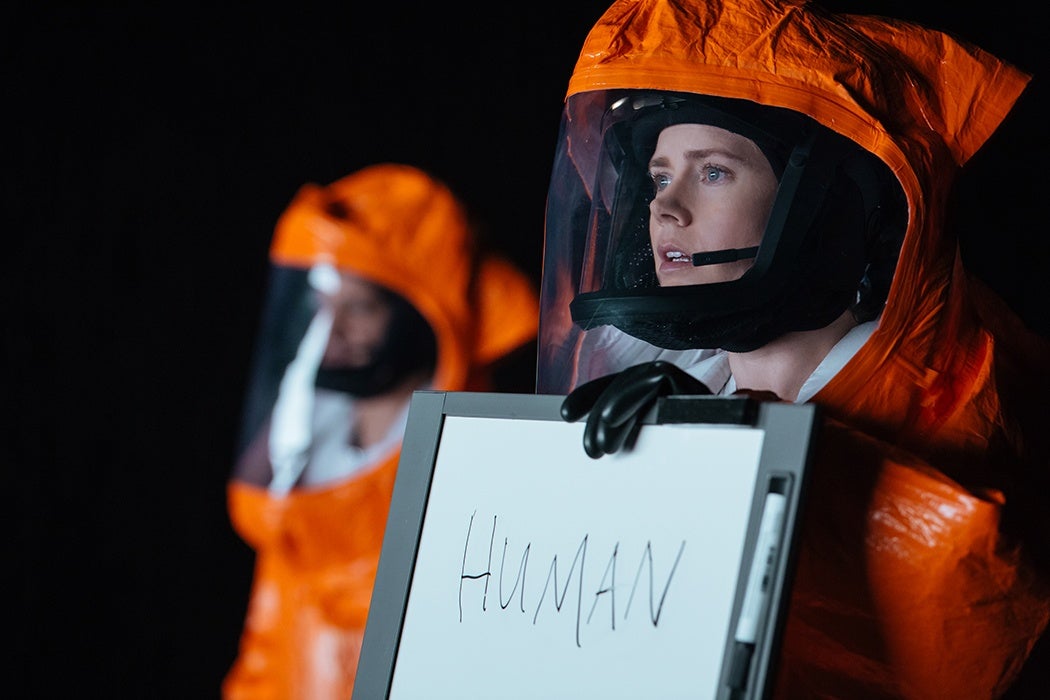 Arrival, the forthcoming sci-fi drama, is that rare bird: a Hollywood film featuring a linguist as the main character. Among a handful of examples, the other big blockbuster that might come to mind is the 90s cult favorite Stargate, in which James Spader plays a kind of linguist, when he’s not busy being an Egyptologist. This time around, Amy Adams is in the linguistic hotseat, as Dr Louise Banks, who’s “… at the top of everyone’s list when it comes to translations,” says Forest Whitaker’s Colonel Weber. Many people, even army colonels, are prone to misunderstanding what it is that linguists actually do, which is not really to know all the languages, (including alien ones), but that’s okay.

Despite the sometimes sloppy Hollywood depiction of linguistics and language, it’s great to finally see a linguist protagonist in a context more exciting than an nearly empty auditorium of bored undergraduates (though apparently that also happens in the movie, as a hat tip to reality perhaps?).

Fast-paced alien drama aside, Arrival is actually based on Ted Chiang’s quiet, contemplative sci-fi novella The Story of Your Life, in which linguistics takes center stage. In particular, the ways spoken and written language diverge and change the way we look at the world is a core theme, the point of the story, and also provides the heartbreaking twist. (The story is well worth reading, if you haven’t done so yet, and not just because there may be spoilers below). The Story of Your Life’s thought-provoking narrative certainly brings up more questions about language than it resolves.

Xenolinguistic questions such as “how do we talk to aliens?” (without the assistance of a hand-wavy universal translator) is an obvious one in sci-fi stories such as this, and there are real world parallels in linguistic fieldwork with a monolingual population. Without a shared communication system (such as another language) or perhaps a shared understanding of the world (such as being human), would we be able to grasp the basics of an alien language, and would aliens be able to understand ours? These are all fascinating questions that, alas, will have to remain unanswered until some clever aliens manage to explain Fermi’s paradox.

But there are even simpler and subtler linguistic curiosities in this story that highlight some of the assumptions we make about our own human languages. Language is messy, as we know, and aliens are probably even messier, let alone their speech sounds. Just like in the movies, it would be so much easier if there was some kind of useful technology that would help us record and dissect real linguistic forms in all their regular, codified glory. Like, say, writing.

Written language develops into a powerful linguistic force in Chiang’s story, in unexpected ways. The aliens’ speech, a “spoken” language labelled Heptapod A, sounds “vaguely like that of a wet dog shaking the water out of its fur.” Not the easiest speech to mimic. So Dr. Louise Banks, assuming the well-travelled, high-tech aliens, despite their many legs, must have a writing system, resorts to trying to figure out their written symbols in order to learn this language in a more regular, pen-to-paper form. She discovers, to her surprise, that the aliens have a kind of semasiographic writing system, known as Heptapod B, that is so different from its speech form that it constitutes another, completely separate language, unrelated to the aliens’ spoken language. It has no real words, instead, it uses a well thought out calligraphic assemblage of ideogram symbols along a preconceived line.

What’s more, without going down a rabbit hole of too many spoilers, in a slightly implausible but interesting take on the Sapir-Whorf hypothesis, Louise Banks finds that developing fluency in Heptapod B actually alters the way she perceives the world, in an extreme, deterministic way. Essentially, simply by writing a sentence in this mysterious Heptapod B language, Louise learns how to conceptualize and view her own future in limited ways, and even sees how futile it is to escape from it, to devastating effect. In fact the only way to complete a Heptapod B sentence is to know exactly how it ends, and by extension, this means knowing what will happen.

So just how weird is this depiction of writing? It turns out, not actually that weird (well, apart from the aliens). Are written and spoken language really two different things, and when beginning your sentences in written language, do you have to kind of know the future already? Or at least the future of how the sentence will end?

In a way, the answer is yes.

Now, for many, writing doesn’t just represent language, writing is language. With such a common myth bandied about, it may not occur to us that it’s different from spoken language, which frequently has been seen as the inferior and error-prone version of language. Surprisingly, it’s only been since the 20th century that “natural” language in the form of speech, warts and all, was given its due as a legitimate area of study. Writing has long been considered the one true form of language; when people debate so-called prescriptive grammar rules that turn out to be style or spelling rules, it’s really about the written form of language. And yet, written language is an invented technology, a relatively young upstart compared to our capacity for spoken languages (which had evolved by about 100,000 BC). It arose in a few places independently, starting from around 3000 BC, from Sumerian cuneiform to Egyptian hieroglyphics to Mayan scripts and Chinese logograms.

So language didn’t start with writing. Although there have been plenty of strong, silent types throughout history, most people would have used language by speaking it, as many cultures do today who have an oral tradition instead of a writing system. However, language has definitely evolved with writing. Linguistic registers, contexts, genres, perhaps even complex sentence structures, have developed through the explosive use of written language.

Speech conveys interpersonal relationships between speakers and listeners, while writing is more concerned with pure content and information.

So the kind of language we use when we write, and the kind we use when we speak, are not the same. Children at an early age, for example, tend to write very much as they would speak. It takes time and practice before they learn to write in a more verbose written style, with embedded subordinate clauses and more complex syntactic structures. There’s an argument for treating written language as another dialect of English, as James C. Stalker suggests. Both forms can use slightly different language and rules. Just comparing a transcript of speech to a purely written text reveals how sentences may often not be formally completed, thoughts backtracked, and how clauses are more sequential and less complex than they would be in a written version. Similarly, in a language like French, the spoken and written forms can be so syntactically different there can be literacy difficulties for even native speakers as they learn the written language. Many linguistic archaisms such as certain verb tenses that aren’t really used in spoken French remain alive and well in its written form.

Peter Elbow points out that speech tends to be more “phatic,” which means speakers say a lot more about interpersonal relationships between themselves and their listeners, and less about pure content and information, compared to written language. In speech, participants continually collaborate to give and receive cues about the changing speech context. Speech can be a stream of consciousness, with unfinished utterances, half-formed thoughts, and a healthy smattering of messy slang. You don’t have to know how a sentence will end before you start it. It clearly doesn’t matter how many errors, performance or grammar-wise, you introduce into speech, because speech is ephemeral, and once spoken, is gone.

Meanwhile, the written form is indelible, well-defined, and its careful commitment to information storage may be the reason why people tend to regard it highly—in itself, it is complete. It is readable by any audience, even without speech cues. Elbow suggests that while speech is inherently social, and changes according to social context and cues, writing is solitary, and applies to all contexts—all visual and vocal cues have to be in the text itself. He suggests “that the function of writing is to record what we have already decided—not to figure out whether we believe it. If we were speaking, we would be much more likely to speak the train of thought as it comes to mind even though we’re not sure of our final opinion—as a way of making up our minds.”

The conceit of Heptapod B is that in order to write a sentence, you have to know exactly what will happen in the sentence in order to compose it with the right meanings. Taken to an extreme, it alters your scope of the future as you see what lies ahead. It may seem trivial to point out, but when we write, we very often already know what has to be said, and what we intend to say in writing (even if we don’t exactly know the future). The sentence is already complete and composed mentally before it’s written. This is what the technology of writing has brought to human language.

Compare this to newer communication uses of the same technology, through texting and instant messaging on social media, where written language has become so immediate and synchronous that writing is no longer what we understand as writing. Instead, it’s possibly evolving into a new form of language—a kind of “textual speech,” that linguists like John McWhorter have called “fingered speech.” The unfinished streams of thought, the social and visual cue sharing and the ephemeral nature of the text are all indicators of speech… which happens to be written.

Writing is evolving from a system of marks and symbols that carefully record linguistic information to a fly-by-the-seat-of-your-pants stream of ephemeral yet indelible speech. Perhaps it’s not so far off to consider an alien language in which a written form has become its own, powerful language that changes how we view the world. Something similar can be said for language here on earth.